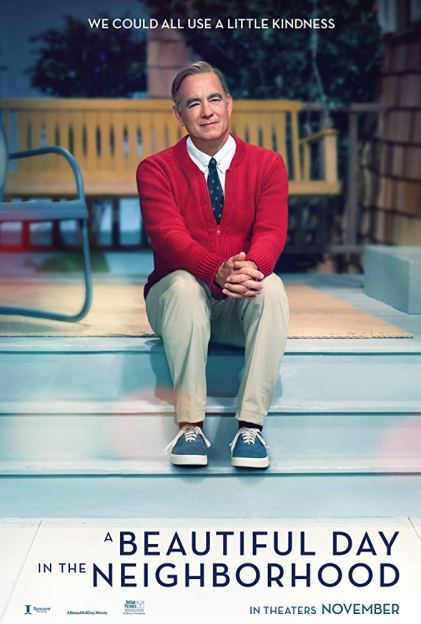 A Beautiful Day in the Neighborhood attempts a delicate balancing act and mostly manages to follow through on it. While the trailer focused on Mr. Rogers, this really isn’t a Mr. Rogers movie; it is a movie about a cynical journalist whose interviews with Fred Rogers helps him to reevaluate his life. The movie is about the fictional Lloyd Vogel and his relationships with his father, his wife and his newborn child. Mr. Rogers is the catalyst for his change, but he is not the central character of the movie.

That point is an important one, because the most wholly successful part of the movie is Tom Hank’s portrayal of Fred Rogers. He nails the slow, deliberate cadence of how he talked, his complete empathy. The movie puts him to good use when he is on screen. Vogel is tasked with interviewing Rogers for a magazine feature on heroes. The cynical Vogel goes in trying to find the cracks in the apparently saintly Mr. Rogers. However, Mr. Rogers honest, if not entirely open, replies to his questions cause the reported to stumble. This eventually leads to a Vogel

The central emotional thread is how Vogel, played by Matthew Rhys, relates to his father and how he is going to relate to his newborn son. Vogel’s father, played by Chris Cooper, left the family while his mother was sick with cancer. He shows up to Vogel’s sister’s wedding in an attempt to mend things, but Vogel is not interesting in hearing from his dad. As he meets with Mr. Rogers begins to realize that his anger at his father will continue to affect his life, and his family’s lives, as long as he holds on to it. So with Mr. Rogers as the catalyst, Vogel begins to reconnect with his father.

There is something strange about this movie. The objectively very corny Mr. Rogers stuff worked for me completely. From movie’s framing device as an episode of Mr. Rogers Neighborhood, to spontaneous Mr. Rogers reactions like the crowd on the subway breaking out into his theme song or him asking for a moment of silence during a meal and having the whole restaurant, and the movie, go silent for a minute. That stuff is corny, but it absolutely worked on me. A lot of that has to do with the completely irony free Mr. Rogers, in real life and as portrayed by Hanks. What was more spotty was the somewhat boilerplate familiar reconciliation plotline that takes up most of the movie. It isn’t because Cooper or Rhys aren’t good actors or doing good work; the story is just has so little interesting going on that it never really does anything.

A Beautiful Day in the Neighborhood is well worth watching. It does given a look into what made Mr. Rogers so amazing, so powerful and so unique. But the movie doesn’t really focus on him. If you want a movie about Mr. Rogers, watch last year’s Won’t You Be My Neighbor. This is a middling to solid drama with a strong Tom Hanks performance as Mr. Rogers that makes the whole thing work.