Given the way things are now, I expected to finish more books in March than I did. However, I am certain I will have read a greater number of books in April, I will have read more if I just finish the ones I started in March. Though I am not making the progress I thought I would be being stuck at home. Still, three books in March is not bad, given everything else that is going on. 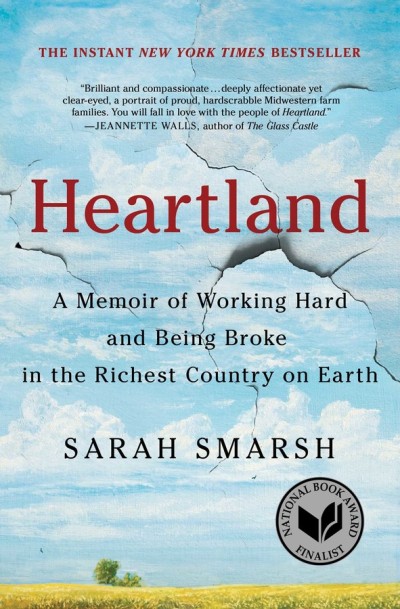 Heartland: A Memoir of Working Hard and Being Broke in the Richest Country on Earth

This is a non-fiction look at poverty in America, and how growing up poor can affect your entire life and outlook. It reflects Smarsh’s personal and family history, but it also highlights larger problems. There are no systems or structures in place to actually help people get out of poverty. The time period covered by the book details the erosion of much of what could help, especially in the farmland where she grew up.

Smarsh’s story does a great job of showing the cycle of poverty that catches people in ways they can’t escape. Her grandmother keeps moving, but cannot make enough money anywhere to give her protection when any sort of financial or personal tragedy hits. No amount of hard work or skill can counteract the weight of the system against the poor; meritocracy is a lie.

If there is a weakness to the book it is the sentence to sentence writing. Smarsh uses a conceit where she is writing to her unborn daughter, a conceit I do not think really works. Other parts are just kind of awkward. None of that really gets in the way of the power of the story she is telling. I grew up in a similar area, if just a little more well off than her family. Smarsh really captures the feeling in rural communities.

My second biography of one of the greatest Supreme Court Justices to ever sit the bench. This one is less in depth than the previous one, but it is still good and gives an excellent look at the life and jurisprudence of William Brennan. As the title indicates, this book highlights Brennan’s ability to build consensus. While other Justices were often brilliant, they could also be rigid. Getting Hugo Black or William O. Douglas to agree to a compromise in an effort to reach a decision that the requisite number of judges could agree on was no easy task, even if one agreed with them. The same could be true of conservative justices like Rehnquist or Burger. Brennan had the ability to determine where the disagreements were and to build a consensus. When the court took a rightward turn in the 1980’s, he used that ability to limit the damage they did to the court’s jurisprudence. Brennan is not one of the most exciting figures of the court; he has nothing on the life of Douglas or Thurgood Marshall, but he was definitely one of the most effective justices.

The second of Holmberg’s Numina trilogy. I do not have a lot to say about this book. I liked Holmberg’s Paper Magician books, but this one feels a little like the story is chasing its own tail. It is the same characters doing the same things, never really feeling like they are making progress. I am intrigued by the world and the characters, but until near the end here, I do not think this book did much. I will likely read the third book at some point, but I have not been crazy about these.