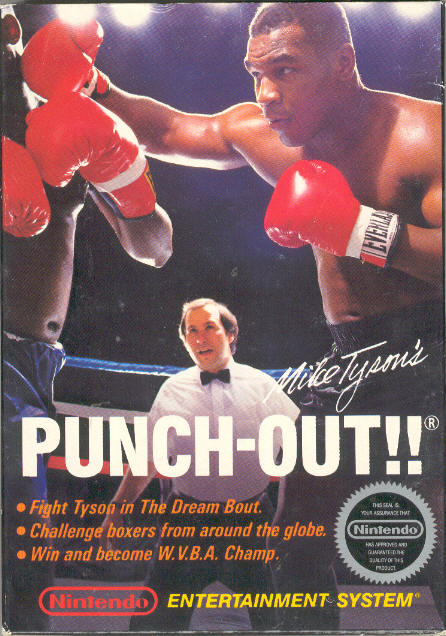 Punch-Out!! is not the best sports game on the NES.  It is number two, though.  That in not a huge accomplishment considering the only real competition is World Cup Soccer and Tecmo Bowl, with World Cup Soccer being better.  If you are lenient in your definition of sports game the maybe Super Dodge Ball.   There are also some other good sports games, including several baseball ones and at least two hockey games that people still argue about.  But as good as those game may be, Punch-Out!! is better.  Much of this has to do with its terrific graphics.  Graphics that required a special chip for the NES to display.  And for its colorful cast of characters.  However, Punch-Out!! has a dirty secret:  it is not actually a sports game.  It is a rhythm game, the mechanical ancestor more of Guitar Hero than Fight Night.  The boxing game exterior hides the rhythm game soul. 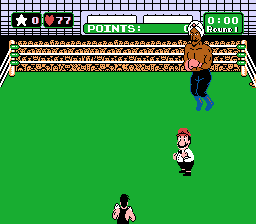 The gameplay is a large part of Punch-Out!!’s well loved design.  There is no way they could have actually convincingly done an actual boxing game for the NES.  So Nintendo made a game that looked like boxing, even if it played like something completely different.  The gameplay is deceptively simple.  Watch for visual clues from the opponent to predict his punches and dodge or counter punch.  It is all about recognizing the time for and timing your moves.  As the game goes on the timing becomes more strict and the opposing boxers include more fakes.  So the player must perfect his timing.  The early fights are easy enough to help the player get familiar with the moves available.  There are not many.  You can block, dodge left or dodge right as far as defensive moves go.  Your punches are left body, right body, left head, right head.   B for left, A for right, with the default punch being to the body and head punches by simply pressing up on the d-pad.  There is also a super punch, which can only be used if a player has a star.  A star, or up to three, is gained by punching the opponent at certain times and lost by getting hit.  The super punch is used by pressing select.  The controls fit perfectly to the NES controller.  The d-pad controls mostly defensive moves, by pushing right left and back for the dodges and block respectively.  All the buttons are used, but the control are simple enough that anybody can play the game. 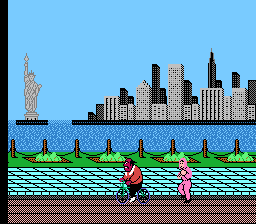 The graphics, as mentioned before, are terrific.  Punch-Out!! used oversized sprites that required an extra chip on the cartridge, the MMC2, to run.  This was not unusual, many NES games had extra chips, but Punch-Out!! was the only one to use the MMC2, giving a distinctive look.  That look was screen filling, detailed opponent sprites.  Since much of the gameplay was dependant on watching your opponents the player character, aptly named Little Mac, was tiny.  While this did give an unfettered view of the opponent, it also created a terrific David versus Goliath feeling.  Since the game required the player to read his opponent, big sprites were necessary.  They also gave them a fantastic cartoony look that fit with the rest of the games tone. 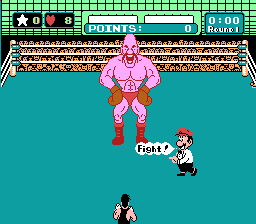 The  cartoony cast of colorful opponents was a big draw.  I say colorful because I like the game and prefer colorful to “offensive racial stereotypes.”  Which they are.  You start with Glass Joe, a wimpy Frenchman.  Von Kaiser was basically a Nazi.  Piston Honda(Hondo) shouts random Japanese words at you between rounds.  Great Tiger, whose name alone qualifies him, with his turban and mystical powers.  And as far as names go how about Soda Popinski, also known as Vodka Drunkenski, the always drinking Soviet.  I could go one for every opponent, including the American ones, but I think you get the point.  These broad characters, rather than detracting from the experience, greatly add to it.  There is no malice in the stereotypes and they are much too ridiculous to actually be offensive.   They help make Punch-Out!! One of the most memorable NES games.

I’m not going to bother with the whole Mike Tyson part of the game, though I would say that Mike Tyson’s Punch-Out!! is the definitive version.  The combination of great graphics, fun atmosphere and perfect gameplay makes Punch-Out!! one of  the best games to grace any console. 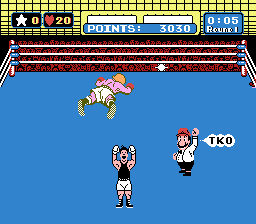 One thought on “A TKO from Tokyo”