Since I started reading comics again four or five years ago, the writing team of Jimmy Palmiotti and Justin Gray has become one of my favorites. I have enjoyed nearly everything of theirs that I’ve read, from Power Girl to Freedom Fighters to Jonah Hex. A week or so ago I got a couple comics by them. Or at least one written by the pair of them and one that was a Palmiotti solo project. The first is the Ray, written by Gray and Palmiotti with by Jamal Igle and Rich Perrotta, is a classic superhero story with modern sensibilities. The second, Queen Crab written by Palmiotti with art by Artiz Eiguren, nearly defies description. They are both good books, though they are very different.

In some ways the Ray, the last issue of which came out a few weeks ago, is a very traditional superhero comic. It has all the pieces of the basic superhero story, but with some progressive touches. The Ray is a comic that features a very ethnically diverse cast, but it doesn’t do so in a pandering, distasteful way. Lucian Gates, the new Ray, is a Korean American but this isn’t a story about an Asian superhero, this is a story of a superhero who happens to be Asian. His friends and family are from a variety of backgrounds, but for the most point that is never the point of their character, just a simple fact.

That supporting cast is one of the things this book does so well. In many superhero books nowadays the heroes life out of the costume is disappearing, but the life Lucien Gates takes prominence. The comic introduces his supportive if not particularly helpful adoptive hippy parents, his best friend Darius and his girlfriend Chanti. As much as the book is about Lucien learning how to deal with his new powers, it is about how they affect his relationships. The slightly different focus makes this book very refreshing.

The other refreshing thing about The Ray is its more light-hearted tone. Since Ray is a hero with light based powers, his adventures tend to be very light. He mostly deals with personal trouble and big monsters. In contrast to the usual superhero book, The Ray is fun. At least until issue 3, when it all goes horribly wrong. The big change in the tone of the book in that issue is especially jarring. Going from fun and light to dark and terrible feels wrong. It works, at least in light of the ending. The big villain of the book has the powers to make his imagination real. After (spoilers!) fails to defeat him and Chanti shoots him, Lucien uses hypnosis to make him fix the past.

In all, The Ray is a fun new superhero. One that I am not especially hopeful of seeing around much in the future. But this story at least does a good job of setting up the hero’s status quo for what could be an entertaining ongoing, even if this is all we ever see from him. 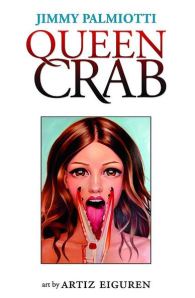 Queen Crab is certainly a strange comic. I’m not quite sure how to describe it. It definitely has some elements of horror, but I wouldn’t call it a horror comic. I guess it is a surreal character study. However you would classify this book, it is certainly interesting and even very good, I would say.

Queen Crab is about Ginger Drake, a woman who gets thrown overboard by her husband on their honeymoon cruise. Only instead of drowning, she wakes up on the beach with crab pincers in place of arms. It is a set-up that could be used for a horror story, especially if the story were told from the point of view of Murray, Ginger’s new husband. It would be a story of a man’s sins coming back to haunt him, a monster in place of his murdered wife. But this isn’t Murray’s story, its Ginger’s and she isn’t a monster. No Queen Crab is a story about a woman, about a terrible event that forever changes her life.

Really, Ginger’s life is kind of a mess at the start of the book. She is cheating on her fiancé, her fiancé is cheating on her and she is being sexually harassed by her boss. Ginger mostly accepts her life as good enough, that it is as good as it gets. Though she does seem to hope that her marriage to Murray will be an improvement. Though as the plot set up indicates, it isn’t. After her transformation (caution: spoilers ahead!) Ginger does get revenge on Murray, but that is far from the end of the story. Were this the simple horror story it appears to be, that would likely be the end of it. She got her revenge, but the monster must be killed. Instead, she leaves her old life behind and goes to build a new one. Ginger didn’t come back for revenge. At least not wholly. I’ve probably given too much away already, but it really is an intriguing read. It is strange, it is different, but it is also thought provoking.