Lately my Wii gaming time has been taken up with Sengoku Basara: Samurai Heroes. Not a classic by any means, but still a solidly fun game. In many ways, it seems to be a modern version of the brawler. You choose your character and beat up tons of generic dudes with boss battles interspersed. If you’ve played Dynasty Warriors then you know exactly what to expect. It isn’t a perfect game, but there is plenty of mindless fun to be had with Sengoku Basara. 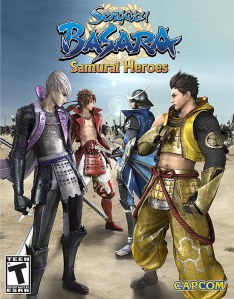 When I say it plays like Dynasty Warriors (and Samurai Warriors), I mean that Sengoku Basara’s gameplay is stolen wholesale from Dynasty Warriors‘. I haven’t played much Dynasty Warriors in a long time, but Sengoku Basara basically steals its lunch. While there are some differences, they play about 90% the same. The big difference between the two series is in how they are presented. Dynasty Warriors has this veneer of historical accuracy. Not that it is accurate, but it seems like it could be. The Warriors series are like the Hollywood version of Chinese and Japanese history. Sengoku Basara takes some names and scenarios, but throws out anything that seems even remotely historically accurate. It is the anime version of the same events.

The style of Sengoku Basara is complete nonsense and I love it. Magoichi Saica blazes across the battlefield, blowing about Samurai with a variety of shotguns and automatic weapons. She keeps a dozen or so pistols in some sort of Gatling garter around her thigh. It is hilariously ridiculous. Ieyasu fights with his fists, even on horseback. There is nothing quite like galloping across a battlefield, leaning out of the saddle to punch dudes in the face. And Masamune Date wields his six katanas like Wolverine’s claws. Every battle is filled with ridiculous stuff, the kind of half-translated insanity one would expect from an NES game. Even with how simple the gameplay is, the craziness keeps it fun for quite a while.

There are a couple of problems. The first is that battles go on a little too long. Each map takes about 20 minutes to clear. That is just a shade too long. This isn’t a big problem, but after a few levels it does get tiring. If they could have cut that down by about a third, I think it would have greatly helped the pace of the game. The other problem is that there are only about 30 levels, so after playing about five characters you’ve probably seen about all of them. Maybe I’m being too hard on the game, since it is far from light on content. I first played as Ieyasu, then as Mitsunari. After that, everyone I played as had basically the same options as those two. Playing as Magoichi had me repeating 7 of the 10 levels of Ieyasu’s path, though I did have a choice of following him or Mitsunari. In the end, it just seemed like I was playing a lot of the same levels over and over. Since the levels are slightly too long, it made the whole thing stop being fun a lot faster than it should have.

Though I am calling Sengoku Basara: Samurai Heroes beaten, my completion percentage right now sits at about 10%. There is a lot of game I apparently haven’t seen, but I’ve had my fun with it. Rather than keep playing and get burnt out, I’ll put it back on the shelf. If it is truly the heir to Streets of Rage and Double Dragon, and I think it scratches a very similar itch to those games, then I’ll occasionally pick it back up for a play through for a long time. Sometimes you just want to hammer one button and see your enemies fall.