I know I said I was going to play Majora’s Mask, and I am currently doing so, but after finishing up Bravely Default I needed something to play on my 3DS. So I picked up my game of Oracle of Seasons game that I gave up when I got A Link Between Worlds for Christmas. I am glad I finally got the chance to finish it up. I wasn’t much a fan of the other Oracle game. It was good, but Oracle of Ages has way too much tedious chatting and fetch questing in between the parts where the player actually gets to play. Oracle of Seasons doesn’t have much of that nonsense, and it’s all the better for it. While not as quite as good as Link’s Awakening, Oracle of Seasons is an excellent game. It is, however, maybe the most difficult Zelda game that is not on the NES. 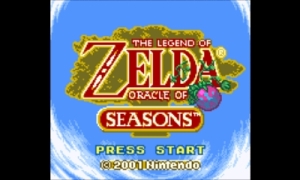 The internet tells me that Oracle of Seasons started as remake of the original Legend of Zelda. I believe it. The two games are quite alike. The first three or four dungeons of Seasons are much like the early dungeons of LoZ. Later the season changing mechanics become more involved, which obscures the similatiries, but there are still some. Many of the bosses are straight out of the first game. It is also, at times, brutally difficult. I don’t think I would have beaten it if I hadn’t been playing a linked game and therefore able to get the Master Sword. Oracle of Ages is a test of the player’s mind, Oracle of Seasons is a test of the player’s skill. There are some tricky puzzles, but there are more hazards and enemies. Like the LoZ’s rooms full of Darknuts and Wizrobes, OoS is all about the mastery of Zelda’s stiff combat. The individual rooms in the dungeons aren’t as difficult as the originals, the later dungeons are more of a prolonged nightmare. Normally, once you clear a room it is cleared until you leave the dungeon or die. However, in Oracle of Seasons, when you go into one of the side scrolling underground areas all the enemies respawn. Which means that as the player moves through the dungeon, there are no cleared rooms. They are always full of enemies. 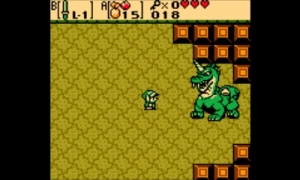 Also, the game doesn’t have the same potion as the original. In that game there were blue and red potions, good for one or two uses depending on which color. In Oracle of Seasons, there is a potion, which you have to do most of the trading sequence to unlock, which is one use and is automatically used when you run out of hearts. So if you wanted to save it for the boss but you fell to a half dozen wizrobes just before, you’d have to leave the dungeon and run all the way across the map to get a new one. It is a frustrating decision. All together it means that that while the individual challenges are never as hard as Legend of Zelda’s, there is a constant source of tension and challenge in that there are always more enemies.

The first half of this game is just perfectly smooth. Compared to the other handheld Zelda’s, this game is really straightforward. There is none of the nonsense between the player and the dungeons, that player must only find them. It is refreshing. I love the Zelda series, but sometimes the games bog down forcing the player to do things that simply aren’t that fun. Seasons, the first half in particular, is remarkably short on that kind of stuff. The game is Zelda on the simplest terms in a lot of ways. Where it deviates from that is with the Rod of Seasons. It adds some puzzle solving to the overworld. Fun puzzles solving, not the nonsense from Ages. Each season changes the layout of the map a little, with different map features. Winter has snow drifts for the player to walk on, Spring had flowers that shoot the player up, etc. These are cued in by persistent map features. If there is a spring flower, it will still be there in the summer and fall, merely a withered husk of its springy healthy self. While it does require some thought, environmental never gets too difficult. There is only one spot where it gets truly complex, the Lost Woods, but it gives the player just enough to think about. 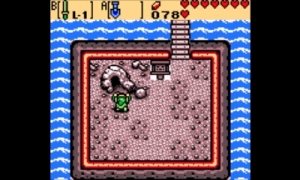 There are some downsides. Some of the later dungeons get downright brutal. Not necessarily a bad thing, but it can be frustrating. Much like the previous two Gameboy Zeldas, the thing still feels limited. I know that is absolutely an unfair complaint to lodge against the games; I don’t care. Their system of origin really keep me from liking them as much as I do nearly any other Zelda game. A lot of it has to do with the item switching. I think I complained about that in both my Link’s Awakening article and my Oracle of Ages one; the complaint still stands. Have to go to the menu over and over to change weapons and tools to solve puzzles is not fun. It is annoying. Still, Oracle of Seasons is a fun game. It doesn’t reach the heights of console games, but it was a fun experience. It was definitely better than Oracle of Ages, but not quite as good as Link’s Awakening. 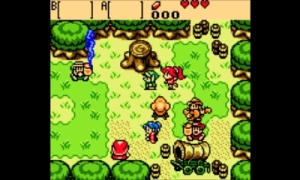 One last thing, I guess I need to mention the linked parts of the two Oracle games. If you input a code from one of the beaten games, it opens up some changed cutscenes and puzzles in the new game. There are also a lot of extra rings and items to acquire. Mostly this is done by getting a code from a character in one game and then giving to a character in the other. It is tedious and not very fun, but it does provide some neat linked activity for the two games. Most importantly, it also unlocks the true ending of this little subseries. In the second game, the witches Twinrova start to complete their dastardly plot of sacrificing Zelda to resurrect Ganon. It adds an extra dungeon and a couple of boss battles for Link to thwart them. It is a pretty neat addition.