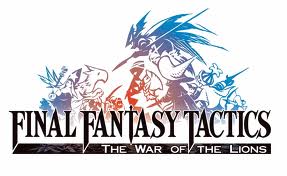 I’ve been playing Final Fantasy Tactics for the first time in years thanks to USgamer Club. I’m trying out the War of the Lions version of the PSP. I’m not sure how much I like it. The rebalancing of the some of the jobs is almost definitely a good thing, but I can’t help it if I am more familiar with the older version. Plus, I like to unlock the classes earlier and spend time mixing and matching abilities. Then there is the slowdown. I’ve basically removed mages from my line up because they slow things down so much. One area that has definitely been improved in this version is the translation. Before, with a little work one could suss out the labyrinthine plot, but the nuances of character were almost completely lost. The new translation, often derided for being flowery, is much more cohesive and manages to give each major character a clear voice.

The gameplay in FFT is what it is. For my money, I still haven’t played a strategy RPG that has better mechanics than FFT. The game displays an attractive confidence in its design, just dropping the player down and letting them have their way with the game’s systems. The difficulty isn’t perfectly balanced; the game can be overwhelming to newcomers and a breeze to veterans. Still, there is something eminently satisfying about putting together a new and effective skill combination. On this playthrough I discovered the power of a Black Mage with Samurai skills. I won’t say it’s perfect or couldn’t be improved, but I don’t think anyone has done the genre better. 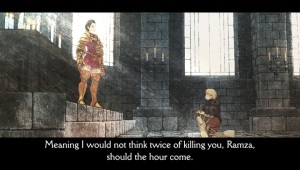 FFT’s story is one of the best to appear in a video game. That is not exactly high praise, as most games aspire and frequently fail to reach the narrative “heights” of Hollywood action movies. Tactics, though, aims for something much more like current fantasy darling Game of Thrones. (unrelated aside: I kind of hate Game of Thrones. Actually, I haven’t watched the show; it is more the book series that I’m not a fan of. It often seems dark for the sake of darkness. Tyrion is a great character, though. It feels ponderous and mean.) While it does get a little sidetracked into something a little more Dragon Ball Z-esque near the end, the bulk of the game really achieves that. 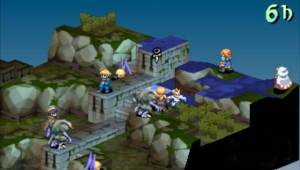 The first chapter is especially good. I love the character dynamic between Delita and Ramza. They start in exactly the same place with one major exception. They are both Knights in training and they both have an adoring younger sister, the only difference is that while Ramza is the youngest son of House Beoulve, Delita is something of a Beoulve charity case. While scenes with Barbaneth Beoulve show that he, like Ramza, likely considered Delita and his sister the same as family that is not true of Ramza’s two older brothers, Dycedarg and Zalbaag. Ramza and Delita are closer than brothers, but due to the circumstances of their birth that first chapter sets them on divergent paths.

I love that narrative device of two friends separated like this. I wrote about that yesterday with The Count of Monte Cristo, but it is better done here. Ramza and Delita never really stop being friends, it is just the reality of the world forces them apart. Partly due to his nature, partly due to his more advantageous birth, Ramza is able to maintain his idealism throughout the story. Delita has no such luxury; any idealism he had is forcibly removed at the end of the first chapter. From then on he tries to use the corrupt system for himself rather than trying to live within it. He realizes that the rules are rigged and stops playing the game. While he wouldn’t hesitate to take out Ramza, he would rather not be forced to. 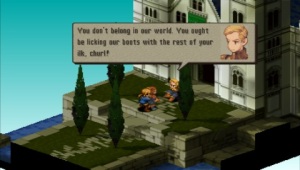 There are two other characters in the first chapter that help illuminate their growth. The first is Argath (Algus in the PS1 version). He is a monster, but he is wise to how the world works. What he says about lower class people like Delita is morally reprehensible, but he is correct as to the practical nature of the world of FFT. What Delita realizes is that, as much as he and Ramza wish it weren’t true, Argath is right, people like Delita are worth less than the nobles. Argath is also an ungrateful, boot licking little bastard, but he is not the only one to betray Delita and Ramza. Though it is not clear at the time, Dycedarg is a complete scheming monster and while he doesn’t do it himself, Zalbaag is party to the order that results in Tietra’s (Delita’s sister) death. Argath is the tool that shows the protagonists how the world works. Then there is Wiegraf, leader of the Corpse Brigade. He, like Delita, is from the lower class. When promises to soldiers are not kept after the war ends, he learns the same lessons about his worth as Delita. His response is to take a very direct approach to fixing the situation. He starts a rebellion, fighting for what he and his men are owed. He is morally right, but he has no chance at success. He is too determined to play by the rules. He won’t stoop to kidnapping or assassination, something that the supposedly honorable noble class is more than willing to do. Delita learns from him what happens to those who openly oppose the system. All the power is on the other side, there is nothing to be gained from fighting it. Delita must use the system to destroy it. Delita learns a whole lot more than Ramza in the first chapter. Ramza just learns that the world of honor that he and a select few others including his dad, believe in isn’t real. It is easy to praise Delita for realizing the truth of the situation and changing to affect change, but I think Ramza’s choice is greater. He determinedly sticks to what he learned from his father is right, those outmoded ideals. He never wavers.

There is another game that uses a similar brothers/friends set up: Suikoden 2. In that one the two friends are betrayed by and forcibly separated from their home country. While they share a goal of taking down the monster that is Luca Blight, soon their methods are forced to diverge. The player character (let’s call him Riou) becomes the leader of their home’s bitter enemy while his counterpart Jowy insinuates himself in with the villain and works from the inside. SPOILERS After Blight is shockingly dealt with around the midpoint of the game, the two friends find themselves reluctantly leading countries at war with each other, neither able to end the war and betray the people who they lead. It makes the whole second half of the game a somber affair. No longer are you fighting against a sadistic monster but instead your best friend. I wish there were more stories that use this set up. I also wish that Suikoden 2 could get a retranslation on par with Final Fantasy Tactics, though preferably not in the same style. 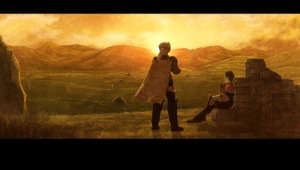 I’ve just about finished with Tactics. I’m well into chapter 4, only a few hours of concentrated play away from finishing things up. That game really holds up well, especially with the comprehensible story. I have thought before on a video game canon, which games need to be played by all fans of games. Tactics would make my list. It is an essential game. Not necessarily to beat, because that can be a grueling task, but at least to experience. Honestly, the idea of a video game canon is worthy of its own post.

One thought on “Brothers At War”