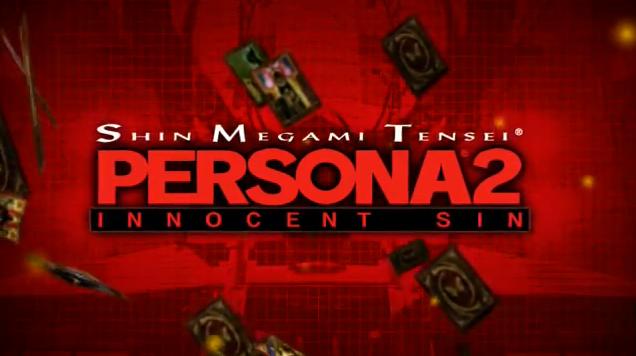 Persona 3 FES is the game that got me into the Shin Megami Tensei mega series. I had been aware of the series before that, but I had never had the opportunity to play any of the games before.  I knew about Persona 2 Eternal Punishment for PS1, but I never saw it in the wild.  The same goes for Nocturne.  Even if I had encountered them, there is a good chance that I would have passed on them; I don’t tend to be a fan of stuff that is “dark.”  But I had heard enough good buzz about Persona 3 that when the re-release was happening I made sure to snag a copy.  It was a great decision.  Since that I had purchased nearly every SMT game, most of them right at launch.  Unfortunately, I often find the games to be as draining as they are enjoyable, so they tend to sit on my backlog.  I bought Persona 2 Innocent Sin for the PSP even though I didn’t own a PSP (my brother did and I did have inconsistent access to it, but I didn’t have one of my own).  It sat on my shelf untouched until a couple of weeks ago.  That was a waste.  I don’t consider P2: IS to be as good of a game as the PS2 Persona games, but it was still an excellent experience.

Persona 3 pulled me in with a solid, thoughtful story.  Yes, it relied plenty on anime clichés, but it was still a well-constructed narrative.  Plus, the Social Links systems let the player feel in control of the protagonist without actually giving the player any control.  The plot is going to play out the same regardless of how the protagonist spends his free time.  Persona 3 kept me playing for 90+ hours with an excellent battle system.  It was tough but almost always fair.  It was all about knowing and exploiting enemy weaknesses while hiding your own.  There were some problems, like the fact that the player only controls the main character, leaving the rest of the party in the hands of the occasionally moronic AI, but it was largely a fine system.

Persona 2 Innocent Sin does not match an excellent plot with a great battle system.  The battle system part fails utterly to hold up its end of that bargain.  The story of Innocent Sin is one of my favorite game stories I’ve ever encountered, but the battle system is at best a distraction and at worst a serious flaw.  It seems interesting at first, but it manages to be both complex and unchallenging.  There are a lot of factors at play with the battle system.  Each character can equip a persona, but they have different levels of compatibility with each of them, other than each characters main persona which only they can use.  However, other than being able to use a persona or not the compatibility doesn’t really matter that much. It costs a little more MP to cast with a poor compatibility, but MP refillers are easy to come by.  Each persona has eight levels and they learn new skills as they level up.  Using them, especially in combo attacks, levels them up.  It is necessary to get them leveled up to be useful, but it also discourages experimentation.  You don’t want to get all new personas just to have no skills.  Learning those combo attacks either requires the player to experiment extensively or to already know about them.  The other big part of the battle system is talking to demons.  This is necessary to get cards needed to make new personas, but mostly it is just tedious.  Some of the interactions between the demons and your party can be very amusing, but once you realize that the demons react the same way every time it starts to feel like a chore.  There are two big flaws with battle system.  The first problem with all of this is that the game is so easy that the player doesn’t really need to learn more than a couple of attacks and then can just cheese through most of the game.  It is just too easy.  The other is that the encounter rate is ridiculous.  You can hardly take two steps without getting drawn into another too easy battle.  It drags the pace of the game to a terrible halt.

The problems with the battles are mitigated with how great the story is.  I don’t want to spoil it too much, but it is just great.  It manages to have well written complex characters and a just balls-out crazy plot.  The game starts with protagonist Tatsuya fixing his motorcycle at school.  After meeting with his teacher, he has a run in with Lisa, a classmate.  She tells him that there are rumors going around about terrible things happening to people who wear the school symbol on their uniform.  Their investigation leads them to a Michel, a punk from the rival school.  Events at that meeting set those three searching for the truth behind the rumors that are becoming true.  Soon they are joined by Maya and Yukino, two reporters looking into the same thing.  Soon it becomes apparent that group has a deeper connection.  Each character has is complex and multifaceted.  Michel tries his hardest to be cool, though deep down he is really insecure and Maya hides her fear behind constant upbeat cheeriness.  They form a genuinely likable party.

Those rumors they are investigating are where a lot of the fun comes in.  It starts as stuff like inter-school rivalries and disliked Principals wanting to be respected and girls claiming they are a pop group.  Soon it escalates to secret societies, ancient prophecies and hidden Nazis.  Just when you think the game has hit maximum craziness, it finds another gear.  It all manages to be justified by the game’s central premise that someone is making rumors come true.  This power gets progressively stronger, so more and more outlandish rumors start becoming real.

Then there is the ending, which is something of a gut punch.  But it does set up the second half of this game, Persona 2 Eternal Punishment.  I’ve got that off of PSN and am eager to see how this story ends.  My only fear is that the localization isn’t up to snuff.  Atlus may be the king of the localization game now, but they weren’t quite there back in the late ’90s.  Just look what happened with the first Persona game.  I am certain the EP is better than that, but I wish the PSP remake would have made It over here, though I understand why it didn’t.  Still, it is half as entertaining as Innocent Sin was, I am sure it won’t matter too much.