Nintendo scored quite the coup when it was announced that Platinum Games was making two games for the WiiU and one of those games was going to be a sequel to their much lauded action game Bayonetta. That news got even better for Nintendo fans with the addition of a port of that game. Bayonetta 2 has more than lived up to the hype. It is an excellent game. It is not a revolutionary game; it is merely a revision of the original. Considering how good that first game was, that is not such a bad thing. Also, Bayonetta 2, as well as the port of Bayonetta, takes full advantage of the Nintendo connection to make a game that is all about bonkers fun. 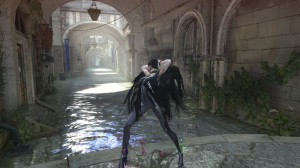 While Bayonetta 2 plays much like is predecessor, it also smooths things out considerably. I must admit that a lot of that smoothing might come from the fact that my previous experience with Bayonetta was playing the PS3 port, which by all accounts is flawed to say the least. That doesn’t change the fact that Bayonetta 2 plays perfectly on the WiiU. There are also some changes to the combat. The Bayonetta combat system is all about narrowly dodging attacks to activate “Witch Time,” where time slows and attacks to more damage. It is some combination of that Matrix influenced “bullet time” and Viewtiful Joe’s slow motion ability. Activating that is easier in Bayonetta 2 thanks to more clearly cued enemy attacks. It is a lot easier to judge exactly when to dodge than it was in the first game. It also removes most of the QTEs that the first game had, making for many fewer cheap deaths.

For the most part, the game is just more of the same. It is Bayonetta, but with more weapons, more enemies, just more in general. I love how the different weapons change how the game plays entirely. Using the bow is a completely different experience than using the scythe. The beast weapon is undoubtedly Salamandra, which is a chainsaw sword. It is supremely satisfying to use that weapon. The other part where the fun really comes in is the Nintendo fan service. The game is loaded with Nintendo themed fun. There are a bevy of costumes themed like Nintendo characters. You can dress Bayonetta as Link or Samus or Peach or Fox. It doesn’t end there, though. When dressed as Link, the halos you collect as currency become rupees. When you’re dressed a Peach (or Daisy) Bayonetta’s wicked weaves – attacks when her hair becomes demon fists or feet – become Bowser themed. As Fox anything that can be replaced with an arwing is replaced with an arwing. It sets the tone as a game that is all about fun. The actual game is as hard as ever and the game doesn’t coddle the player, each victory must be earned, but it is carefully designed so that even failure will be enjoyable. 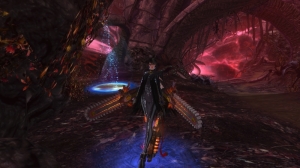 The big elephant in the room is what exactly to make of the game’s main character. It is hard to tangle out what Bayonetta is. Is she a powerful character with positive sexuality or was she created just to pandering with her frequent near nudity and playing to the leering, lingering camera? This has inspired a delightful debate, assuming one can ignore the gang sub-literate hyenas currently shitting up any sort of conversation about video games on the internet especially if it touches on gender. It is not a question with a clear cut answer. The game absolutely does provide ample opportunity for players to ogle Bayonetta, the camera lingers on her ass and chest every chance it can. The game devotes an almost disturbing amount of time to extended crotch shots. However, in the game Bayonetta holds all the power. Her flirty, sexual antics are to amuse herself. The other characters and even the camera to some extent exist to serve her needs. Is the condemnation of Bayonetta just slut shaming? Or is she just another in the long line of “Strong Female Characters“? I fall more to the positive side of that debate, though I am careful of whom I play the game in front of. Bayonetta is entertaining, but it is slightly embarrassing. 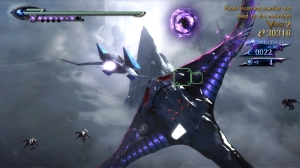 Bayonetta 2 just works. It doesn’t take itself seriously and it defies the player to do so. The story is just an excuse for every escalating conflict between Bayonetta and everyone who stands in her way. While the combat is intense and has an astronomical skill limit, the rest of the game teeters constantly on the edge of silliness. Sometimes it steps away, and is nearly genuinely moving at times, others it gleefully jumps into a pool of silliness and splashes around. Even the most grave moments the game manages are undercut by Bayonetta being dressed in an ill-fitting Princess Peach costume. Bayonetta 2 is certainly a unique experience.