I didn’t play a lot of video games last month; my time was spent with NaNoWriMo, and other than that just general wasted. So this will be a short entry.

Demon’s Crest – I almost forgot entirely about Demon’s Crest.  It is the final game in a spin off of the Ghosts and Goblins series from Capcom, playing as a red demon of sorts.  It is kind of a Mega Man style game with aesthetics closer to that of Castlevania.  It is an excellent, oft overlooked SNES gem.  It looks great and plays even better.  Though the difficulty curve is kind of out of whack, some stages are all but impossible until you get certain upgrades and other upgrades make the large parts of the game a cakewalk.  Still for the most part it is a really great game. 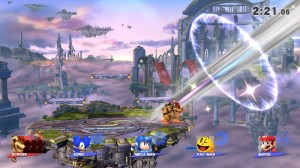 Super Smash Brothers 4 WiiU – It is even better than the 3DS version, which basically stole the month of October from me. It looks amazing, 8-player Smash is mind blowing and Smash Tour is a lot more fun than Smash Run, assuming you have people to play it with. One thing that has stood out about the WiiU version is that the characters I excelled with on the 3DS aren’t the same. I dismissed Dark Pit pretty quickly on 3DS, but I’ve really enjoyed using him on WiiU, while I have fallen to being completely inept with Jigglypuff after loving her the first time out. Rest assured I will have more to say about this game soon. 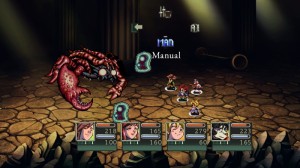 Pier Solar – This game really wants to be a 16-bit RPG and it succeeds, but it doesn’t quite hit the top of the 16-bit RPG pile, landing instead somewhere near the middle. It is occasionally clunky and obtuse, like its inspirations were, but twenty years later that stuff is less acceptable. I still like the game, but through the first few hours it isn’t quite as good as it inspirations, like the Lunar series. Hopefully it gets better and really fulfills the promise it shows.

Mario and Luigi: Dream Team – I have generally enjoyed this series, but they can sometimes be too talky. This game is kind of like the rest of them. It does have a new visual style, and I’ve played enough now that I can say that I really enjoy it. It looks really good in motion. It has some good change ups to the series that aren’t as intrusive as the Bowser stuff from the last game. I would estimate I am about a third of the way through this game, but I will be hard pressed to finish this before the end of the month with Persona Q taking my time away.

Persona Q – This game combines two of my favorite RPG series, and through the first floor of the first dungeon it is everything I hoped it would be, even if it spends way too much time chatting. So far it seamlessly combines the dungeon crawling of the Etrian Odyssey series and the fun stories of Persona. I chose the Persona 4 side of the story, of course, because that game actually had good characters. Hopefully I can get through this before too long.

Yakuza 4 – I only played about 20 minutes of this last month. I will keep plugging away.

Earthbound – miniscule progress, but I’ll keep hacking away at it.

Captain Toad Treasure Tracker – This looks so good, and I loved the Captain Toad stages of SM3DW. I’ll be jumping on this next week.

Legend of Zelda Skyward Sword – This is the last game standing between me and the end of my Zelda replay. I will beat it, I swear this.

Okami HD – I don’t know if I’ll have time to get to it, but I really want to play this again.