I called the last story the end of the first part of this book, and it is. But the second part starts with a story that is largely a payoff to set up from earlier issues that also sets up the biggest arc of the series, the redemption of Black Adam.

The rhythm on this title so far, and with most superhero titles in general, is for a sort of cool down issue after a big story, a chance to show the fallout of what has just happened and adjust the relationships in the book. After the big double arc fighting Kobra and Extant this issue at first, if you ignore the cover, seems to conform to that, but instead veers right into the next big story, and the biggest one in the book yet.

The issue begins with a rogue speedster, like the Flash, killing people around the country. Who or whatever this is, a pretty big body count is racked up in the first few pages. The the scene switches to Dr. Mid-nite and Black Canary out on a date in their civilian identities. A man in a trench coat appears and taunts Dinah about Ollie (Oliver Queen, Green Arrow) being dead. When confronted by Mid-nite, he reveals he knows their secret identities and that he is Count Vertigo, a longtime Green Arrow villain and member of the Injustice Society. He attacks and the scene ends. It moves to Wildcat and Sand watching Raging Bull in a theater. They are accosted by two other patrons who turn out to be Geomancer and Killer Wasp. 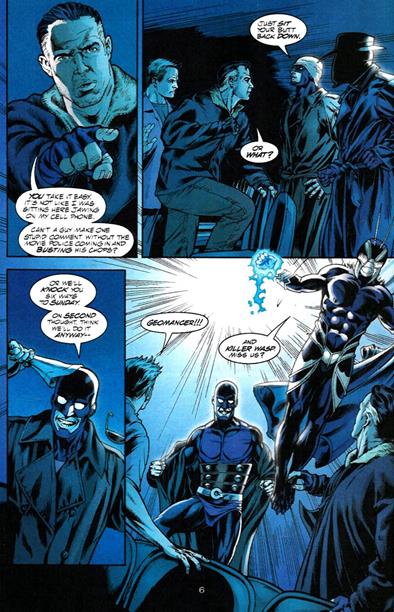 Back at JSA Headquarters, the rest of the team is investigating the deaths by mystery speedster. They realize that he is spelling something out with his kills: Clariss. Flash knows the name, Edward Clariss was a villain he fought back in the 40’s under the name Rival, not dissimilar from the Silver Age’s Reverse Flash. He apparently died when he ran so fast he broke light speed and disappeared, which was then end of him. Of interest here is one of the series few editor’s notes, which states that this occurred in Flash Comics 104, which was the one story about Rival as well as being the last Golden Age appearance of Jay himself. Judging from the pattern, Mr. Terrific knows where Clariss will strike next: Keystone City. 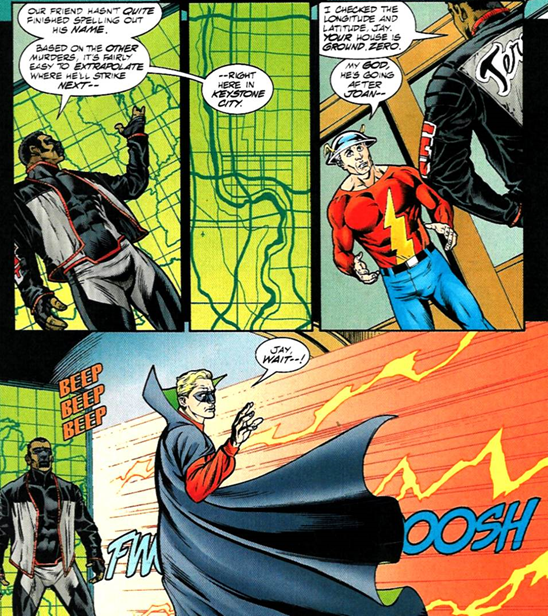 Mr. Terrific gets reports from Canary and Sand about their attacks, when the rest of the Injustice Society shows up. Icicle, Tigress and Shiv. Shiv is a new member, first appearing in Stars and S.T.R.I.P.E., Geoff Johns Star Spangled Kid starring book. She was Courtney’s rival there. They got in thanks to the Thinker. Wildcat mentioned back in issue 10 that the security system at the headquarters was based off of the old villains ‘Thinking Cap’ and patterned on his brainwaves. Shocking no one, the AI gained sentience and turned evil, becoming a new Thinker. Thanks to him, the Injustice Society not only has a counterpart to each JSA member, but also knows their secret identity and weaknesses. They immediately put this information to good use, with Tigress shooting Sentinel in the chest with a piece of Blackbriar Thorn. 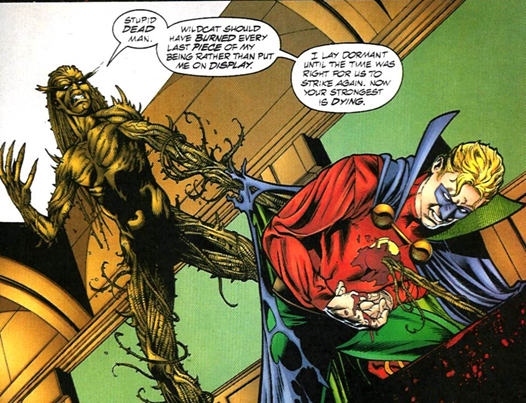 This really changes things. Sentinel is undoubtedly the teams most powerful member, and with him incapacitated, they are really short on power. Mr. Terrific grabs Alan and rushes him to the on-site operating room, usually staffed by actual Doctor Dr. Mid-nite, leaving only Star Spangled Kid and Hawkgirl to deal with the four villains. In Keystone City, Flash catches up to Rival just before he can murder Jay’s wife. With the lovebirds, Mid-nite tosses a blackout bomb to give him and Canary time to change into their costumes and pervs on her a little bit.

In the theater, Sand and Wildcat fight with Geomancer and Killer Wasp, but the tide seems to turn against them with the arrival of Black Adam. That accounts for all of the Injustice Society, plus some extras, but no sign of Sorrow. At least until the last page, where Johnny Sorrow is breaking into the home of Louis Sendak, the Scarab, last seen in issue 4 of the series, where he is going to unleash the King of Tears.

This issue starts like a small issue, with the team relaxing, but it quickly ramps up into the opening act of a big story. After their defeat by Wildcat alone, the Injustice Society pumped up their ranks, adding Thinker, Shiv and Black Adam. This makes them, despite their earlier defeat, seem like a real threat to the JSA.

This issue opens with Mr. Terrific performing heart surgery on Sentinel, while Icicle freezes the room from the outside and Thinker taunts him with the teams eminent destruction. He recaps the situation, with Sand fighting Killer Wasp and Geomancer, Wildcat fighting Black Adam, Dr. Mid-nite and Black Canary dealing with Count Vertigo, the Flash in a deadly race with Rival and Star Spangled Kid and Hawkgirl stuck in the JSA HQ with the rest of the Injustice Society. Hawkgirl and SSK are having trouble fighting Shiv and Tirgess. Dr. Mid-nite is able to disable Count Vertigo by making him vulnerable to his own power. Jay and Clariss run so fast that they start to disappear into the Speed Force, the power that gives all of DC’s speedsters their speed. One of them comes back.

With that ambiguous ending, the book jumps to Sand, who quickly dispatches both Killer Wasp and Geomancer. Then it is on to Wildcat, being held in the outer atmosphere by Black Adam. Black Adam threatens to kill Wildcat, unless Wildcat has a better suggestion.

Back at HQ, Hawkgirl is still fighting with Tigress while Star Spangled Kid is evading Shiv. Stat Spangled Kid gets the jump on her opponent and takes her out, befreo making her way to the control room for Thinker. Meanwhile, Tigress has gotten the upper hand on Hawkgirl and is about to kill her. Her life flashes before her eyes, but it’s not her life, but many different lives. This is just another note in the “what the hell is going on with Hawkgirl” file. A bright light shoots out of her and knocks out Tigress.

In the operating room, Mr. Terrific has just managed to stabilize Sentinel when the door bursts open to reveal Star Spangled Kid, who had knocked out Icicle and Blackbriar Thorn. There is no greater sign of Johns’ ascendency on this book than Courtney’s increased importance. She manages to single handedly take down some of most powerful Injustice Society members. Back outside the HQ, Sand meets up with Canary and Mid-nite, who have gotten from Count Vertigo that Sorrow is going after the Scarab to release the King of Tear. They head to his home.

They find Sorrow and Dr. Mid-nite attacks him, but Sorrow removes his mask, apparently killing him.

That is where the issue ends. The team manages to overcome their opponents, but superheroes fighting supervillains with nothing else at stake is not that interesting. There has to be something else going on and there is here, but this issue doesn’t really elaborate on that until the very end of issue. Once it gets into Sorrow and the King of Tears, the payoff to the story hinted at in issue 10, things actually start to get interesting. 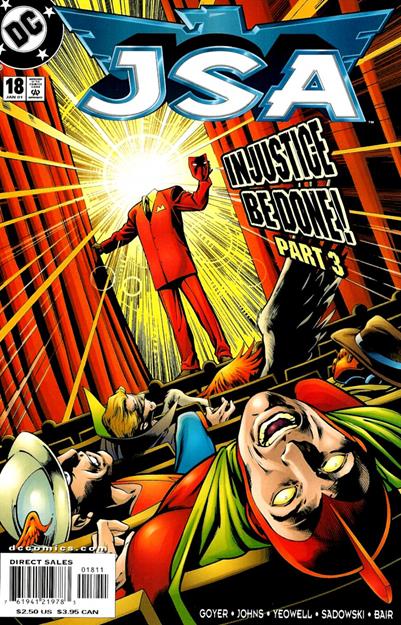 Johns/Goyer and Yeowell and Sadowski and Bair

Like the title suggests, this issue is tells the history of Johnny Sorrow. It does this through his interactions with JSA team leader Sand.

With Dr. Mid-Nite apparently dead, only Sand and Black Canary are left standing to stop Sorrow. As he injects the Scarab with … something so he can use him as a conduit to bring forth the King of Tears Sand recalls the last time he faced Johnny Sorrow, way back when Sorrow was just a run of the mill crook and not a disembodied mask in a suit. Even though Sandman, the hero who Sand used to be the sidekick for, tells him to get away, Sand stays to fight with Sorrow, only to accidently hit him with his little harpoon gun on Sorrrow’s intangible vest and cause him to be apparently killed. 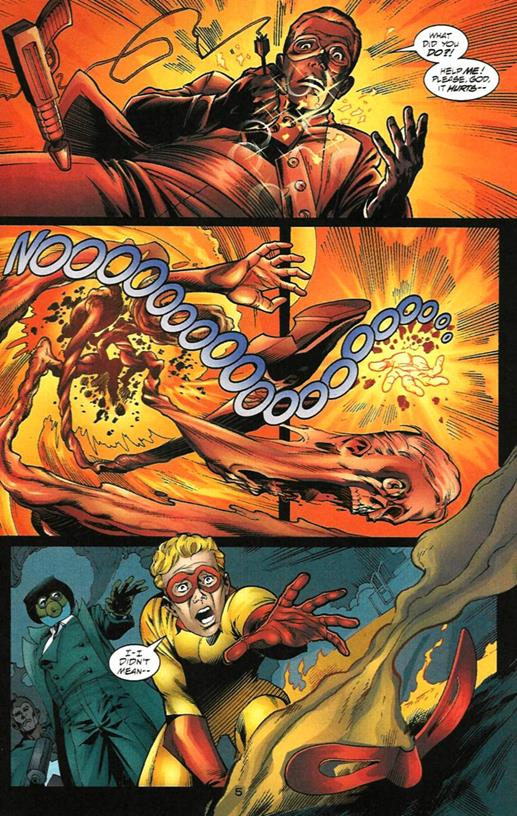 This is the first appearance of the gruesomeness that seems to overpower Johns’ work at times. Here, used as an outstanding moment in a story it is effective. When it happens too often it is just gross. The story then jumps to six months later. Sorrow appears in his current form and kidnaps Sand out of his bed. He takes him to an abandoned theater. There, with the bodies of another superhero team, the Seven Shadows, former team of the Scarab, that Sorrow has killed, he tells Sand his story. When Sand shot him he wasn’t killed, but transported to the Subtle Realms. There he found spirits that turned him into the being his is now and sent him back to secure the way for their king, the King of Tears. Once back he heads to find his wife, but to his horror discovers that showing her his true face kills her. So he took Sand to get revenge. Before he can do anything, the JSA arrives. The Spectre starts to go after Sorrow, so in response he summons the King of Tears.

After that, Sorrow teleports away, and the team tries to fight the indescribable horror that is the King of Tears. Flash and Green Lantern Sentinel fail to take it out, and Hawkman and Hawkgirl try. Knowing what is coming next, that part has more weight, seeing the two Hawks working together, secure in their transcendent love for each other. 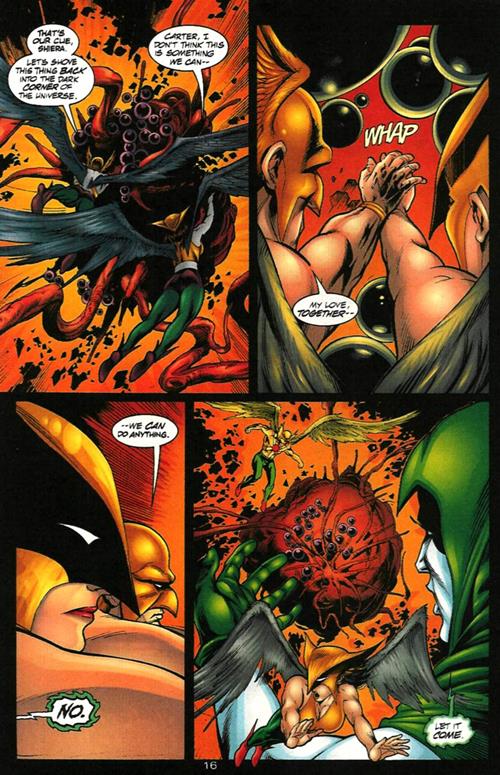 The Spectre then steps in and eats the monster, only to find that he has no real power over it. The Spectre punishes the souls of the wicked, but the King of Tears has no soul. So he cries it out and they trap him as the Spectre’s tears. And so ends the flashback. At the current time, the King of Tears pours out of the poor Scarab and Sand and Black Canary stand alone against it.

This issue doesn’t push the story forward very far, but it does play to the JSA’s strength, their history. Showing the first encounter with the King of Tears in the 40’s and showing how the team defeated it then adds something to their fight with it in the present. Especially after seeing how ineffective the teams most powerful members, Flash and Sentinel, were against it. The only one that had any effect was the Spectre and he is no longer part of the team.

And that is where I am leaving things until next week, when I will go over the second half of Injustice Be Done.