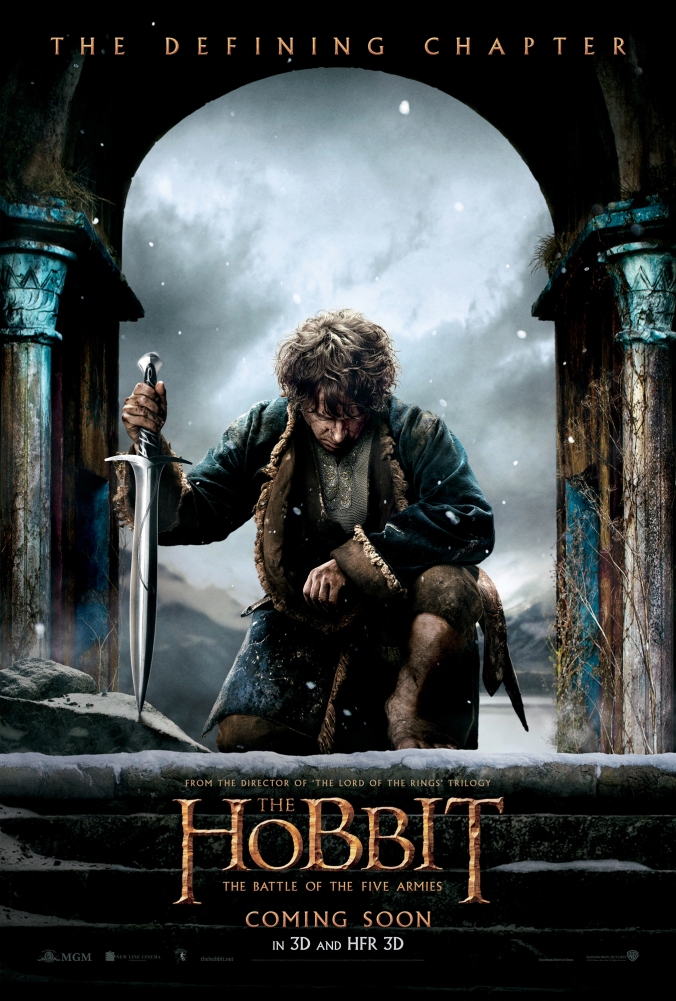 The Hobbit: Battle of Five Armies is almost certainly the last time viewers will get to see Peter’s Jackson’s take on Middle Earth. It is sad, but also absolutely time. While this one is possible the weakest of the six, it is still a delight to watch. Thanks to the last minute split of The Hobbit into three films rather than two, The Battle of Five Armies is narratively slight. It is just a battle. Even though it has the shortest running time of the three movies it still feels padded. That was unavoidable, but there are still some odd decisions in the editing and adaptation of this part of the story. I don’t truly mourn the split into three movies, I am happy for every second of these movies, but makes me wonder about what might have been. Still, The Battle of Five Armies is an enjoyable romp with emotional moments that largely hit perfectly.

The biggest problem with this movie is that there just isn’t much story left to be told. It opens following up on the previous film’s cliffhanger with the dragon Smaug bearing down on Laketown. After he razes the town and is subsequently dealt with, it moves on to the titular battle. Thorin, Bilbo and the rest of the dwarves have taken the mountain. The Men of Laketown, having slayed the dragon but now left homeless want the share of the treasure promised them by Thorin. And Thranduil the Elf King arrives, wanting part of the treasure as well. Thorin begins to act erratically of goads the others into war, saved only from having his small band overrun by the arrival of a dwarven army. Just before they can start fighting, an orc army arrives and the three groups must put aside their differences and fight together.

While there are twists and turns to the battle and how it starts and progresses, that is nearly all the plot in this movie. While it is the confrontation that this series had been building to, it is a rather light. This movie is all action; really good action. There are plenty of personal conflicts. Thorin’s growing erratic behavior strains the friendship that has developed between him and Bilbo through the first two movies. Their arc is almost perfect. Their closeness at the start of the film is well earned and their break hurts. The other big one is the romance between not in the book lady elf Tauriel and the young dwarf Kili. That one feels more forced. There is some chemistry between them, but they haven’t spent enough time together for there to be anything more than infatuation.

The things the previous Hobbit movies do extraordinarily well, frenetic, rollicking action scenes, are continued here. While Lord of the Rings went almost exclusively for high drama, being super serious nearly all the time, The Hobbit is significantly looser. It does have the serious themes and moments, but it is also not afraid to be silly. It has trolls with rocks on their heads acting as living battering rams, dwarves riding around on hogs and headbutting orcs to death and Legolas grabbing a bat and riding it to battle. The action comes fast of is ingeniously choreographed. It is simply delightful.

There are some adaptation and editing issues on display here. For one, they added a ton of Legolas. His inclusion makes some sense, the elves fighting here are his people, but his prominence is distraction and seems to come at the expense of characters who were actually in the book. They also added the character Alfrid. He appeared briefly in the second film, but here he shows up again and again, adding nothing to the film but refusing to go away. Then there is the ending, which comes rather abruptly. While the battle rages forever, the ending almost doesn’t exist. In contrast to how long the warp up to Return of the King was, The Hobbit hits its climax and then just sort of ends. Many questions are left unanswered and plot threads left unaddressed, though the movie does take time to give Legolas plenty of closure. This seems like a problem that will be solved with the inevitable extended edition, which for the first time seems almost essential.

It is very much a continuation to the previous Hobbit movies. What was good in them is good in this one. Like with them, I love it. It is a rollercoaster of movie in the best possible way. It ranges far and wide in tone and emotion, each of them feeling completely natural. It does silly and serious equally well and rarely do the tones seem incongruent. The Battle of Five Armies really hurts from being the unnecessary third movie, but it continues Peter Jackson’s long run of excellence with Tolkien films.