I was shocked about how much I enjoyed Xenoblade Chronicles X. I am not, in general, a big fan of sandbox RPGs. Bethesda’s output has never done anything for me. In fact, it has actively repulsed me. People often describe all the great things they do in Fallout or Elder Scrolls games and while those descriptions are great, actually doing those things tend to be dull. They are simply not fun the play. I am also not remotely interested in exploring their giant worlds. I do like the idea of exploration, but most Western RPGs I’ve played have not strayed far from the well-worn territory of Lord of the Rings influenced fantasy or generic post-apocalyptic (I am undoubtedly doing a disservice to Fallout, but that sort of setting does absolutely nothing for me) wastelands. Xenoblade Chronicles X, despite coming from a completely different gaming legacy, scratched the itch for me that those sorts of sandbox games did for seemingly everyone else. It did this by actually being fun to play and providing a world I actually wanted to explore.

One thing that had been missing from a lot of JRPGs lately is any sense of exploration. I don’t mean anything crazy, just something on the level of SNES Final Fantasies. Even that level of exploration is hard to find. Look at FFXIII. That game was intentionally aping popular corridor shooters, but it ended up creating a world with a very novel setting that didn’t allow the player to have any sense of how this amazing world fit together. Then there is the largely delightful Bravely Default, which crammed a 40 hour game into 15 hours’ worth of game world. There have been exceptions, like Dragon Quest VIII and the first Xenoblade Chronicles. Xenoblade Chronicles X took the original game and did the world just a little bit better.

XCX starts the player as one of the few remaining humans, who have escaped the soon to be destroyed Earth and crashed on the alien planet Mira. The player character then joins an organization tasked with exploring and taming this alien world. Mira is hands down the best video game setting I’ve encountered. The player starts in the relatively normal area of Primordia. It is a rocky plain with a variety of plains creatures running around. Even in this first area there are several different landscapes. There are beaches with dangerous crab-like enemies and flying mantas. There are wide open plains with boar-like enemies and prides of giant cat-esque creatures. There are also rocky hills and tranquil lakes. In the sky about all of this are floating plateaus that taunt the player with their inaccessibility. Enemies range in size from dog-sized beetles to brontosaurus looking monsters that are a hundred feet tall. Just running around exploring this one continent can take dozens of hours. Even late in the game, after I had played for nearly 100 hours, I was still finding new nooks and crannies in Primordia. After that, the player goes to Noctilum, a densely packed rain forest and swampy area. Again, this one continent has enough to explore to keep a player busy for a longer time than some games last. After that there are still three full continents to explore, each as varied and interesting as the first.

The best part is that, after the prologue and tutorial, nearly the entirety of the world is open to explore. If the player so desires, he can run to the fifth continent as see how far he can get. It won’t be too far, the enemies are tough, but it is possible. This lets the game keep players exploring. In all the 120+ hours I played of this game, I never felt like I was repeating myself. There was always some place new to go and some new sight to behold. And the best part is that any place you can see you can go. There are some restrictions, places that require a skell, the game’s names for its mechs that player’s party can pilot, to reach, but many more just require creative use of the landscape.

Those Skells are worth a mention. The player can see other character using them from early on, but the player doesn’t get a license until a good bit into the game and it isn’t until late that it gains the ability to fly. When that flight ability opens up it leads to one of the most exhilarating moments in video game history, as the player seamlessly flies out of the city into Primordia, up into the sky, landing on one of those floating plateaus, and able to look down at the human city and most of the continent below. It is amazing. 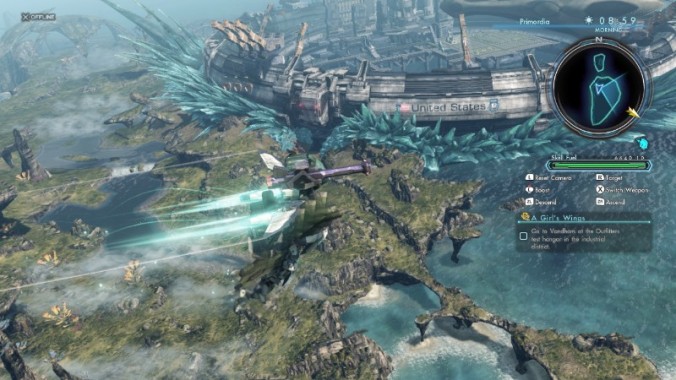 None of that would matter if exploring itself were a chore, but the game wisely facilitates exploration and experimentation. The player’s primary task is to place probes on the landscape. Those allow for more information about the surrounding area. They also serve as checkpoints. The player can warp to many of those probes once they are laid and dying simple kicks the player back to the most recent one, with no loss of experience of money. The lack of penalty for stumbling onto a super strong monster lets the player be bold about the paths they take.

Then there is the battle system, which is complex and active, but not particularly difficult. Most battles can be won with persistence, but there is depth to it if the player wants to find it. That holds true for most of the rest of the game. The income players can derive from placed probes can be manipulated to obscene heights, but the game only requires the minimum effort to be overcome. The story is there. It is told sloppily and without much care as far as pacing and tension, but it is built on some solid ideas and concepts. It doesn’t do anything egregiously bad, but kind of over explains itself since it assumes players have forgotten what’s up with hours between story missions. In contrast to the failings of the central plot, the characters, in aggregate if not each individual, have interesting stories. Each party member has a handful of mission specific to them that helps explain who they are and what they want. All of them are skippable. In fact, other than the handful of party members forced on the player at the start of the game most of the party is skippable. But those stories are reasonably well written and occasionally quite touching.

Xenoblade Chronicles X is not a perfect game. It is big and messy and often obtuse. But the things it does well it does so well to completely overshadow its missteps. It can be annoying to have to track wayward party members down each time you want to change the line-up, for example. That is an odd oversight for a game that does the busy work on collection missions for the player, not requiring them to run back to town to get their rewards. Overall, though, the game does more right than it does wrong by a long shot and so much of what it does well is not done well by any other game. Xenoblade Chronicles X is a singular experience, the kind of game that only comes around once in a great while and is not a game to be missed.