As soon as I finished up Fire Emblem Fates: Birthright I downloaded and started playing Conquest. After about three or four missions, I hit my limit on that unique to Fire Emblem blend of anguish, frustration and triumph and switched over to something else. I love Fire Emblem, but at a certain point I need to take some time to recharge. Coming back after that, I gained a greater appreciation for Conquest.

Honestly, the differences on the gameplay side between Conquest and Birthright were overblown. The lack of extra missions is a small loss; it is not like I took much advantage of that in Birthright. There are some differences, but the experiences are closer than they are different. The two biggest gameplay differences are what made Conquest the superior experience for me. 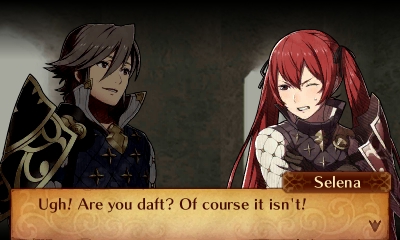 The first is that it uses more traditional Fire Emblem character classes. Birthright threw me off with its changed up weapons and classes. Those changes were largely superficial, like calling axes clubs and the like, but it was enough to throw me off occasionally. Conquest sticking with Cavaliers and Knights instead of Samurai made everything just that much more comfortable for me. I do enjoy seeing Intelligent Systems change things up with the classes, but for a long time series veteran it was a barrier. The mixing of those different classes is what gives Fates its unique feel in the series, that the world is larger and more varied than the world of the previous games. Still, when it comes down to personal preference, I like the older stuff.

The other, more important difference is the variety of mission objectives. Birthright only has one type of mission, Rout the Enemy. You kill all the enemies on the map before they kill you. Conquest gets back to a more traditional Fire Emblem array of mission objectives. There are Kill the Boss missions, Survival missions, Escape, among others. That is where Conquest gains its complexity and maybe a slight decrease in difficulty. I might actually argue it makes things easier, having maps where a suicide run against a boss can end the whole mission rather than having to wipe out the army. Still, the variety makes for more interesting tactical decisions. Some units might be strictly better at killing enemies than others, but a survival mission adds greater importance to units that can tank, like Knights. When your only goal is to kill all the enemies, then a unit’s ability to kill becomes by far its most important skill. Having those other objectives really lets other units have a chance to shine. Of course, by the end of the game the difference is academic. Everything at that point can kill. 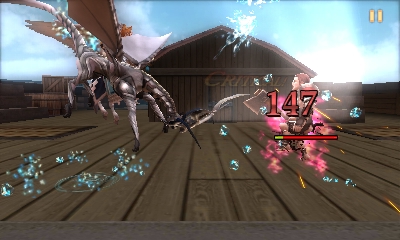 Where the game falters, though, is with its characters. While their classes might be the usual, the characters that join up in Conquest are a strange lot. To me they are a not exactly appealing lot. That veneer of seediness that Nintendo’s localization team has done their paint over shines through here. These characters often seem deliberately created to appeal to certain subsections of the pervy otaku audience. From the overly suggestive, and frankly stupidly attired, Camilla, to the crassness of Nyx’s “I only look young” routine to whatever the fuck is going on with Charlotte. Even when they aren’t unsettling, the characters are just too weird for their own good. Maybe this was also true of Birthright’s cast, but since I didn’t have other ninjas or samurai to judge them against it was less noticeable, but I don’t think I’m coming out of Conquest with many additions to my list of favorite Fire Emblem characters, other than maybe the imports from Awakening. 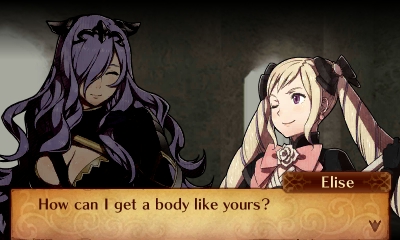 I still maintain that there really isn’t any sensible story related reason to side with Nohr at the choosing point, and playing Conquest hasn’t really changed that. The game jumps through some elaborate hoops to keep the player on the side of good while not disrupting his work for a murderous maniac. Neither game has an especially strong story, that is hopefully reserved for Revelations, but the one in Conquest has some truly absurd leaps of logic. Every character seems willing to acknowledge the problem of King Garon being a crazy murderer, but no one seems willing to even consider taking the steps needed to solve that problem. Or at least not the most direct one.

Still, the improvements to playability in Conquest give it a slight edge over Birthright in my book. I still think Nintendo and IS are crazy for essentially dumping three Fire Emblem games on the world at the same time, but with the video game industry slowly killing everything I love about video games, I’ll take a gift like this any way Nintendo wants to package it. Now it is time for another break before I tackle Revelations.