At least one more time (and likely two) I am going to have to push Super Mario RPG down the line and move on to another game. This time it is the much underrated Sparkster from Konami. Rocket Knight Adventures for Genesis is something of a cult classic, one of the few good games to come out of the overwhelming desire to copy Sonic the Hedgehog in the wake of that game’s release. Unfortunately, while RKA has a darling critical reputation, I don’t think it stuck that well in terms of sales. It wasn’t until a couple of years ago, when Konami put out the largely very good Rocket Knight for PS3 and 360, that I learned that not only did the game have a sequel, it had two separate sequels, one for the SNES and one for the Genesis, both named Sparkster. 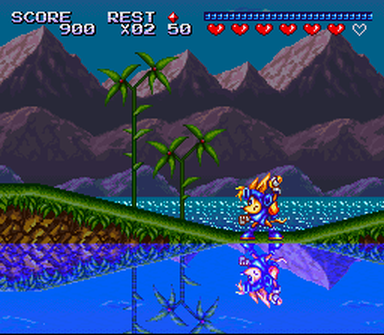 Sparkster for the SNES plays very much like the original game. That is a very good thing, because Rocket Knight Adventures was a very good game. This time Wolf people have attacked the possum kingdom and Sparkster must fight them off. Sparkster can jump, swing his sword and charge up his jet pack and shoot across the screen. It is a simple, yet very effective moveset. Most of the game can be accomplished with a the simple ‘A’ jumps, ‘B’ shoots style pf play, but to truly get the most out of the game you have to master the rocket pack. This is a game made for mastery. One can set the game on easy and get through it with only a vague understanding of its mechanics (that is largely my strategy) but learning the ins and outs of the controls is necessary. Plus, the game does that terrible thing where it hides content behind difficulty levels. Not just the ending or something, which is understandable, but full levels of the game are inaccessible on certain difficulty levels. That fact made me switch from easy to normal after my first attempt at the game, but even playing on normal is not enough to see the true ending. (Which I watched on youtube because fuck that) I would assume it is an attempt to hamper the rental market, but it mostly just punishes players and games these days have wisely moved away from this sort of thing. 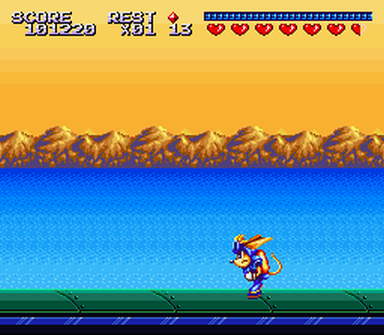 The level design is inventive and built really well on the protagonists powers. The big one it the ricochet with the rocket pack. If you boost into a wall, you will bounce off. If you boost at an angle, you will bounce off at a corresponding angle. Knowing how to angle your boosts are necessary to getting the most out of the game. There are a few levels that abandon the traditional control scheme or set up. On had the player riding on the back of an ostrich or something as it speeds through the level with limited control of where it goes. Another is just a full on vertical shooter that morphs into two giant robots punching each other in space. They aren’t what the player came for, but they are amazing on their own way and more entertaining than frustrating. Otherwise, it is just pitch perfect escalation of the concept. 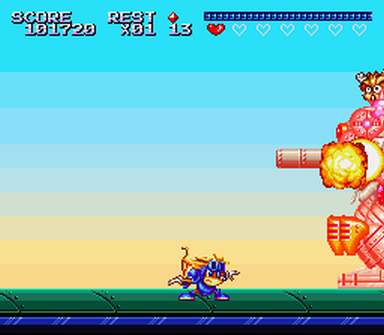 It looks and sounds great, though. The graphics are truly outstanding, especially the backgrounds. The sunset in the pyramid stage is the SNES aesthetic at its finest. The game looks and plays like pure joy.

Honestly, I like Sparkster more than the other two games in the series I’ve played. It isn’t quite the Mega Man 2 to Rocket Knight Adventures Mega Man, but I do think it improves on that game (which I haven’t played in years) in several ways, not the least of which is graphically. It is also better than the 2010 game, which had its heart in the right place even if it didn’t quite capture the magic. I have yet to play the other Sparkster, though. It seems unfair that this game has been all but forgotten in talk of the SNES’s great games. It does not quite belong in that top echelon with Super Mario World or Mega Man X, but it slots nicely in that next level down with Donkey Kong Country and Kirby’s Dreamland 3.