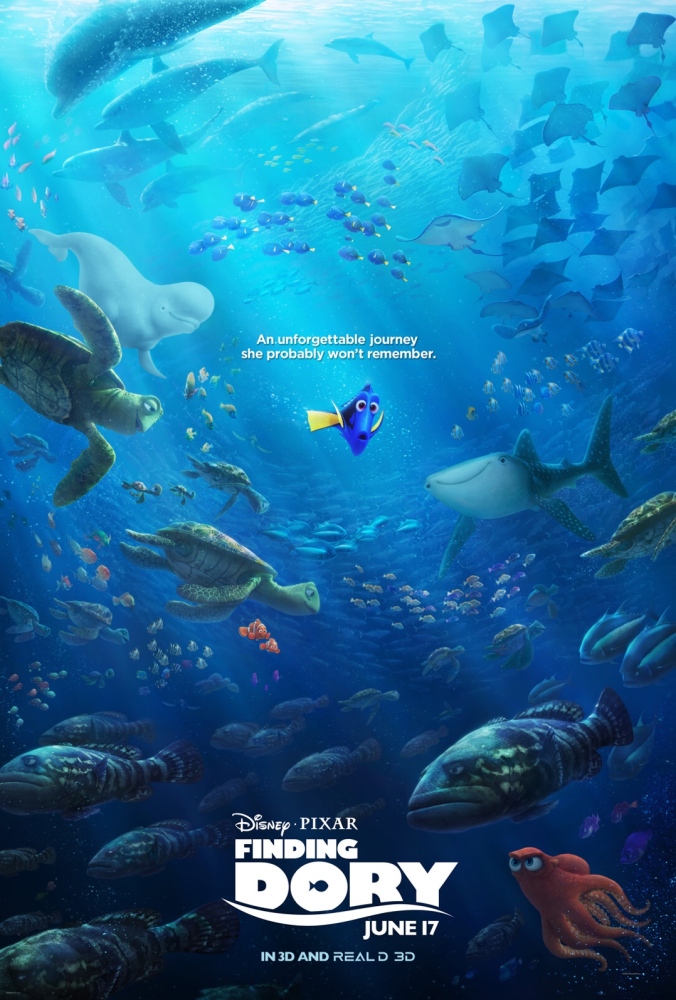 I feel like I start all of my Pixar movie reviews noting their excellent track record. It hovers over all of their films, inescapable. Though I haven’t seen The Good Dinosaur yet, I feel confident saying that Pixar has one bad movie to their name. Even though it didn’t blow me away like the best of their output, a long list including last summer’s Inside Out, Finding Dory keeps up their strong output.

A sequel to 2003’s Finding Nemo, Finding Dory shifts the focus to the titular blue tang who has, as she will tell you repeatedly, short term memory loss. After briefly recalling something of her life before she met up with Nemo and Marlin, the three of them go on a quest to find her missing family. Their trek leads them to the aquarium where Dory was born and raised. There she becomes separated from Marlin and Nemo and both she and they meet up with a variety of colorful aquatic life, including the grumpy yet helpful octopus Hank. Other than Hank the new characters fail to make much of an impression, most of them having only one bit that is repeated a few times instead of actually feeling like characters.

The biggest part of the movie amounts to a series of highly amusing vignettes as the characters move around the aquarium. The only character with any sort of through line is Dory, and hers development moves in fits and starts thanks to her memory problems. The other characters are mostly static. Marlin goes through the exact same arc as he did in the previous movie. Still, Dory’s journey is well done even if she is a character that I have never cared for. Pixar has mastered the art of making all-ages movies that have jokes and bright colorful stories for kids, but running thoughtful, adult themes behind them. Dory’s steady recovery of her previous life and her growing ability to deal with her handicap is a strong idea to hang a story on.

Still it doesn’t quite land like the better Pixar movies do. It feels a little too close to its predecessor. It makes sure all the characters from Finding Nemo get to make an appearance, even if it doesn’t add anything to this film. It isn’t a retread, but neither does it add a whole lot. Some characters get assumed character growth that doesn’t actually come out of anything that has happened in the rest of the movie. It also doesn’t help that the film escalates to a finale that doesn’t really fit in with the tone of the rest of the movie.

It is most reminiscent of Toy Story 2, which is fine but not quite as good as the first, only noting that Finding Nemo isn’t quite as good as Toy Story to begin with. This is starting to sound harsh, when Finding Dory is a perfectly good film, just not a great one. Finding Dory is a fine addition to Pixar’s library, but it isn’t one that is long going to be remembered. It is touching, but not heartbreaking, amusing but not hilarious, good looking but not gorgeous.