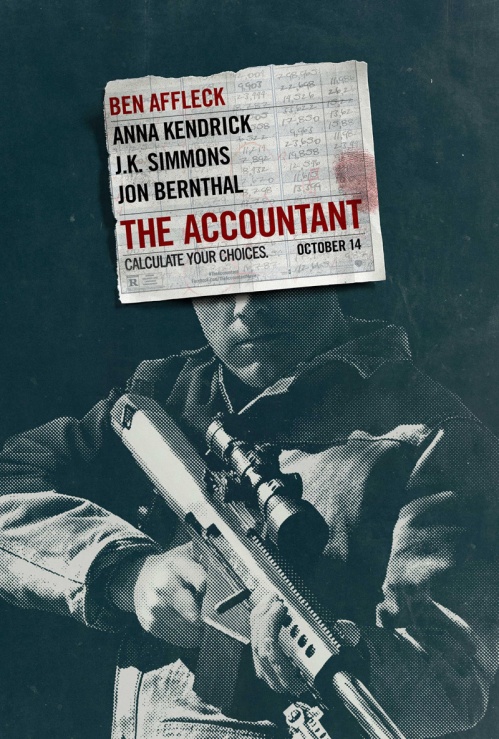 The Accountant sets a lot of plots going, but doesn’t manage to pull them together into a satisfying whole. There is a lot to like here, not the least of which is Ben Affleck’s autistic protagonist. While many of the films elements are worthwhile, the puzzle pieces don’t all fit together. Still, it features some moderately satisfying action and a lot of entertaining performances giving entertain performances.

Affleck stars as Christian Wolff – one of many aliases – an accountant for organized crime and warlords, anyone who can’t just call up the usual CPA to help with the books. For once he takes a supposedly normal job, finding missing money for a robotics company. A discrepancy was found by a young accountant, played by Anna Kendrick, so they call in Wolff. While he quickly finds what appears to be the source of the missing money, the thief turns up dead and the business owner (John Lithgow) wishes the matter dropped. Wolff is unwilling to drop it, and things go south from there. Interspersed with this are scenes with Treasury agents tracking the mysterious accountant and scenes with a charming heavy; as well as scenes showing Wolff’s experiences growing up with his harsh father and younger brother.

While most of the actors give fine performances, notably Jon Berenthal as the charming mercenary, this is Affleck’s movie. He makes his character’s autism obvious, without turning it into full Rain Man shtick or making it seem like a superpower. He is blunt in his personal interactions, furtively avoiding eye contact and speaking flatly and plainly, with none of the small talk to make things move easy. It is clearly a performance designed to take his condition seriously.

Honestly, I might have liked the movie more if it had completely eschewed the action. The scenes with Affleck doing his work and spending time with Anna Kendrick are charming, if brief. The action is actually fine, whether it is Affleck’s complete efficiency or Berenthal’s more conversational tone. Affleck’s character had been trained by his strict and not especially likeable father, to master his body, giving him skills that he can use when his communication skills break down.

The only scenes that really don’t work are the ones with the Treasury Agents investigating his activities. Despite JK Simmons’ best efforts, those scenes don’t amount to much. Partly because they are too far behind the whole movie, slowly unraveling the Accountant’s methods and origin while the more immediate story is happening. It mostly amounts to the younger agent watching videos on her computer and relating that to Simmons’ character.

Then there are the various third act revelations that should tie everything together. They really don’t. Some of them are obvious, some are preposterous. It turns the ending into something of an anti-climax, since the movie’s humanity gets in the way of the usual structure. I liked one big departure; it made the end of the movie something completely different even if the whole thing didn’t quite work. The Accountant is a movie with too many plot threads to adequately service all of them, so it ends up feeling a little bloated and unfinished, though completely enjoyable.

One thought on “The Accountant Review”