Dragon Quest VII has had a long road to recognition in the West. The Dragon Quest series in general hasn’t had too great of success, but Dragon Quest 7’s struggle has seemed even tougher than some of the games that weren’t initially released in America. This game was released for the Playstation, as Dragon Warrior VII, but that was in 2001, a scant couple of months before Final Fantasy X hit. That original version has its strengths, but the disparity in visuals between those two games effectively illustrates why the game was so poorly received. That seemed to kill the series in America for a while, before its revival with Dragon Quest VIII and the subsequent run of DS games. But even that petered out before the 3DS came along, with a DQVII remake. (As well as a Rocket Slime sequel that will sadly remain Japan only) It long looked like this game would never come over from Japan, not reaching Western shores for more than three and a half years since it originally came out. It is such an improvement in many ways from the PS version, giving its stronger qualities a chance to shine in a way that it didn’t before. While it isn’t the strongest game in the series, it is certainly a must play 3DS game.

Dragon Quest VII strongly follows the series vignette based story telling style. It follows it to a fault. Games like DQV and DQIX used the structure to great effect, letting smaller stories flesh out the world and the greater conflict. The main story is unfolds by the player collecting tablet fragments that, when combined, unlock new islands, each with a town or two. Each little town was its own story, though there was a greater narrative building behind them. Dragon Quest VII does this, but that greater narrative never really materializes in a significant way or more precisely doesn’t seem to really grow out of the smaller vignettes. All the details you get about the greater conflict are laid out relatively quickly and flatly, all of the vignettes merely tell their own stories. Those little stories are much more interesting that bigger story, which is as rote as rote can be. Those little stories are the draw and they deliver. Each town freed from the darkness has some sort of story. Few of them are particularly happy affairs. The game is suffused with a sense of tragedy. There are moments like in the past forcing a reclusive inventor, who lost is one love years ago, to help you defeat an army of killer robots by having him make his own robot, only to find in the present that that lonely robot is still attempting to attend to the needs of the inventor, who died long before. It is tragic and heartbreaking and a little absurd. That goes for much of this game. 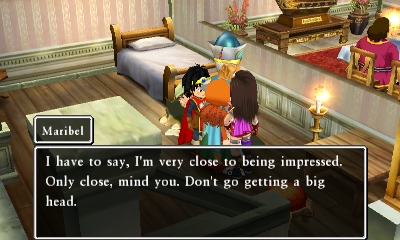 It does have some great characters, though the game doesn’t put them to the best use. You spend a lot of time alone, or just with reckless young prince Keifer before the spoiled young Maribel joins. It is that trio for several hours before you finally get a forth party member and a full party. The game then, of course, yanks a character away a good long while before dropping the last two party members on the player. That last one especially joins too late to make a strong impact. Still, the characters are a lot of fun. Ruff, a small boy who rides around on a wolf, is only ever concerned with food or smells. His one track mind gets a lot of great reactions. Maribel is the game’s breakout character, being delightfully awful the whole time. She constantly berates the hero, suggest various princesses and queens abdicate in her favor and is just generally kind of terrible. Mervyn, the old hero, and Aishe are fine, but join too late to be all that memorable. 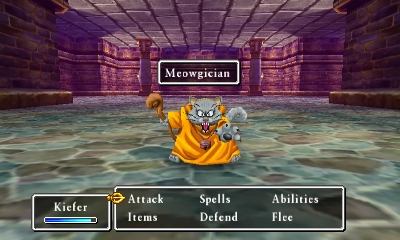 Gameplay wise it is classic Dragon Quest, with the classic Dragon Quest butchering of a class system. It has such a system, but it doesn’t unlock until more than halfway through the game. For stretches near the end it also locks the player out of being able to change classes, so hopefully you didn’t get stuck with some crappy ones. It does give the player a wide variety of options for tackling the games challenges, but nothing, so long as you don’t do something stupid like make the whole party mages, poses enough of a challenge for your choices to matter. Everything else is standard Dragon Quest, which means standard JRPG. Very solidly made, but also quite simple. 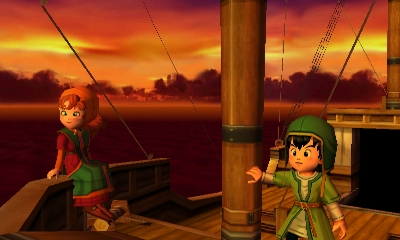 In the end, Dragon Quest VII doesn’t stack up against the best games in the series. It is no IV or V, but it is certainly better than VI. This 3DS version is a visual delight and a very enjoyable 45 hour game that just so happens to take 60 hours to beat. Dragon Quest VII’s flaws are all very forgivable, since they come from the game trying to do and be too much. It starts small, but it eventually gets very big. It doesn’t manage to nail that turn, but most of the game is a lot of fun to play.

One thought on “Dragon Quest VII”