Four books again in November, though I did read a lot of a couple books I didn’t manage to finish (Republic of Thieves and Mornings on Horseback) so next month I might be able to get 5 read. Or not, what with the holidays taking up a lot of time.

The Secret History of Wonder Woman

This is an amazing book for anyone who is a fan of Wonder Woman or Golden Age comics or simply a fan of fantastic weirdos. The Secret History of Wonder Woman tells the story of the character’s creators. Not only William Moulton Marston, the credited creator and writer of the comic from its inception until his death, but also Elizabeth Holloway and Olive Byrne, his wife and their lover.

As is made clear over the course of this excellent book, William Moulton Marston was a fantastic weirdo. I don’t mean that in any malicious way; it is just that he lived a live that was odd by any measure. What is most amazing his how many aspects of his life found their way into his work on Wonder Woman, which came comparatively late in his life. He was a psychologist and lawyer, but his wife was the breadwinner. Mostly because Marston himself was not especially successful at his endeavors. He invented an early version of the lie detector test, but was unable to market it well. They were all tied to the feminist movement of the early 20th century, with some of the leaders of the that organization being closely related to this extended family and some their ideas being referenced in Wonder Woman stories, as well as some of Marston’s own idiosyncrasies – like the emphasis on bondage. Lepore does an excellent job of illuminating these people, keeping their weirdness but making them seem very human.

It shows how Wonder Woman started as a strong feminist character, created by a strong, if unusual, feminist and how that legacy was erased once Marston died and control of the character was wrested from his family. This is an amazing book about some amazing people. 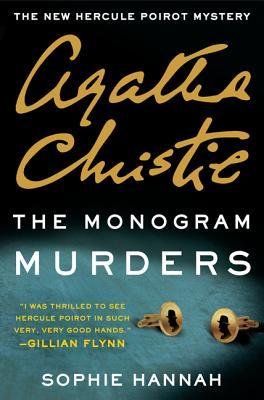 This is a continuation of Agatha Christie’s Poirot stories and it reads like one. For better or worse, Hannah has done an excellent job of aping Christie’s Poirot. The plot doesn’t quite hold up to that standard, but this does feel remarkably like a lesser Christie. The mystery centers around three people found dead at the same hotel, with all of their rooms set up the same way. While the three had not come to the hotel at the same time, they were all connected to events in a small town years before. Its twists get a little ludicrous, but that is not unheard of for Christie. The biggest problem Poirot’s sidekick Catchpool, who is preposterously bad at his job. I know having a somewhat dull counterpart to the detective is a staple of detective novels, but Catchpool, who ends up carrying large parts of this somewhat overlong book, is among the least competent police men I’ve ever encountered in a novel. That is probably the biggest thing that keeps this from being more than a lesser Poirot story. Still, I enjoyed it enough to seek out more.

A Duty to the Dead

I’ve read the first three books of this series of WW1 mysteries completely out of order, which largely doesn’t matter does confuse things a little. Bess Crawford is a WW1 nurse who tries to honor the last request of a soldier in her care who died. She goes to his home and ends up embroiled in a mystery that goes back to that soldier’s childhood, when his step-brother was accused of killing one of their servants. Since then he has been locked in an insane asylum. Events in this small town, as well as the soldier’s dying request, lead to doubt that brother’s culpability, but the four brothers are the only real suspects. It isn’t the best mystery I’ve ever encountered, feeling a little bloated and overstuffed for what turns out to be a not all the complex case. I would read further books in the series, but so far all three that I’ve read have been passable but not particularly exciting.

I was not familiar with this book before the amazing Studio Ghibli movie, but I liked that enough to jump on a cheap copy of this a few years ago that I only now got around to reading. I know at the time of the movie’s release there were some grumblings about how the movie differed from the book. After reading the book, those complaints were well founded. While I love the movie for what it is, it is definitely Miyazaki’s story that just happens to use her world and characters.

The book is great. Sophie is the eldest of the Hatter girls, who believes she is doomed to failure. When her father dies, her step-mother arranges promising apprenticeships for the two younger daughters while she and Sophie run the family hat shop. That largely amounts to Sophie running the hat shop while her step-mother does whatever. The Witch of the Waste, confusing Sophie for one of her sisters, curses her to be an old lady. Sophie then leaves the hat shop and wanders the countryside, eventually finding the Moving Castle, the home of the Wizard Howl, who has as bad a reputation as the Witch of the Waste. There, Sophie agrees to help Calcifer, the fire demon, to break his contract with Howl. This leads to her living in the castle and getting to the bottom of several mysteries around the Kingdom of Ingary.

One of the greatest strengths of this book is that there is only one villain, the Witch of the Waste, and even her story ends up being more pathetic than anything else. There are a lot of characters with conflicts with each other, but none of them are evil. Sophie’s step-mother can be kind of selfish, but she is a young widow who loves her children even if she might do what is best for her if not necessarily best for them. Howl is kind of a scoundrel, but he is a good guy deep down. Calcifer the fire demon only wants to be free, even if that might cause trouble for other people. Howl’s Moving Castle is kind of meandering at times, a little picaresque, but many of its episodes are a lot of fun and the world and characters are mostly a lot of fun. I think I’ll have to track down its sequels.