Secret of Evermore is a Squaresoft SNES game that is largely forgotten when talking about the 16-bit RPG giant’s output. It’s not Final Fantasy or Chrono Trigger or even Secret of Mana. Though Secret of Mana is part of the reason the game is remembered by those who do remember it. Secret of Evermore is the first and only game developed by Squaresoft USA. It plays much like Secret of Mana and got a bad rep largely for supposedly preventing us in the USA from getting Secret of Mana’s real sequel. That loss appears to have more to do with Squaresoft’s falling out with Nintendo and the difficulties in compressing the dialogue to fit onto an American cartridge. Still, while the game is not actually connected to the Mana series, Evermore is built along the same lines. 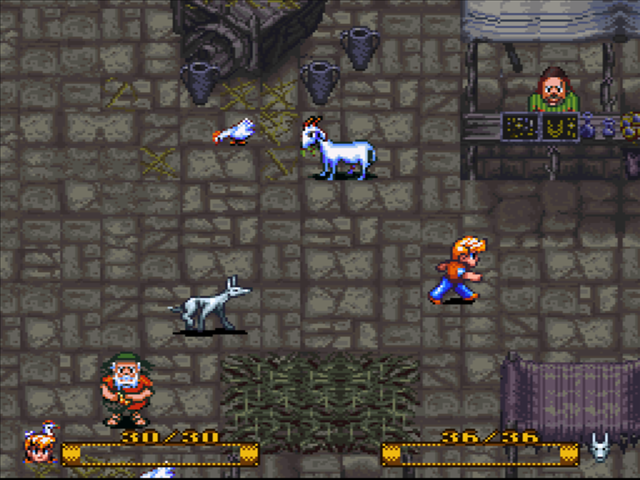 For better or worse, Secret of Evermore does feel “American.” It weird, but it is weird in a somewhat familiar way. The protagonist is an everyday kid that gets sucked into an alternate reality with his dog. The closest thing he has to a personality is that he loves what sound like terrible science fiction movies. His dog has more going on, if only because the dog changes form in each area of the game, going from a monstrous cave dog to a sleek greyhound to a fancy poodle to a jet power toaster. It is something at least.

The game starts with the main character getting sucked into a prehistoric world and movies through a few different realms before ending in a science fiction world. Each world is the creation of one of the people who were originally involved in an alternate reality experiment, and each one created a world to their liking. The game plays out a little like Chrono Trigger, moving from one setting to a completely different one every handful of hours. The game looks good, though not great. The music, though, is pretty great. It does play a lot like Secret of Mana. It has that same hit and wait battle system, with a meter at the bottom that must charge before you can effectively attack again. It has the ring menus for choosing spells and weapons. There are some changes to how spells work, but the game is definitely a sibling of Secret of Mana. 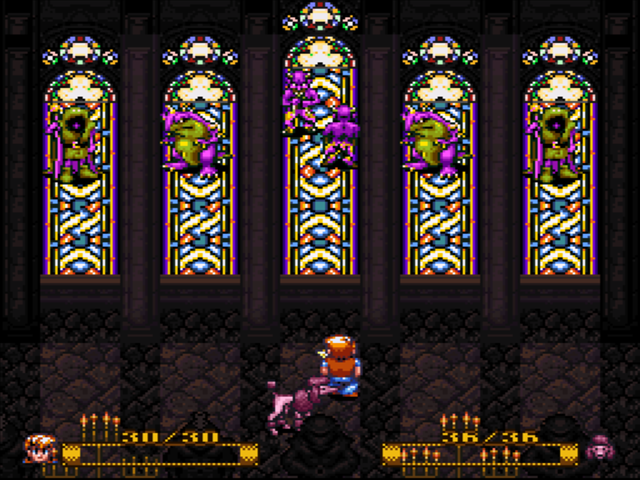 There are two things that stop the game from being one of the SNES’s greats. The first is one of those changes from Secret of Mana, the differences in the magic system. Magic in Secret of Mana was already a low point, since you had to level it up by repeatedly casting spells. That seems to be somewhat alleviated by having only one character in Secret of Evermore, but something new added to what in Secret of Evermore is called Alchemy makes it even more tedious. In order to alchemy, you have to have the spell ingredients. That means you have to scour levels with dog to find invisible ingredients or spend all of your money stocking up on ingredients so you can cast the magic. Plus, you still have to level up each spell individually. So you cast the spell repeatedly to level up so it is strong enough to be useful, but then you run out of ingredients so you can’t actually cast it. It really makes you want to stick with some magic you learn early in the game, assuming you stocked up on enough spell ingredients to keep casting the high level versions of it. Without checking a guide there is no way of knowing which spells are actually worth using, other than leveling them up some and comparing, but that leads to even more ingredient hunting. 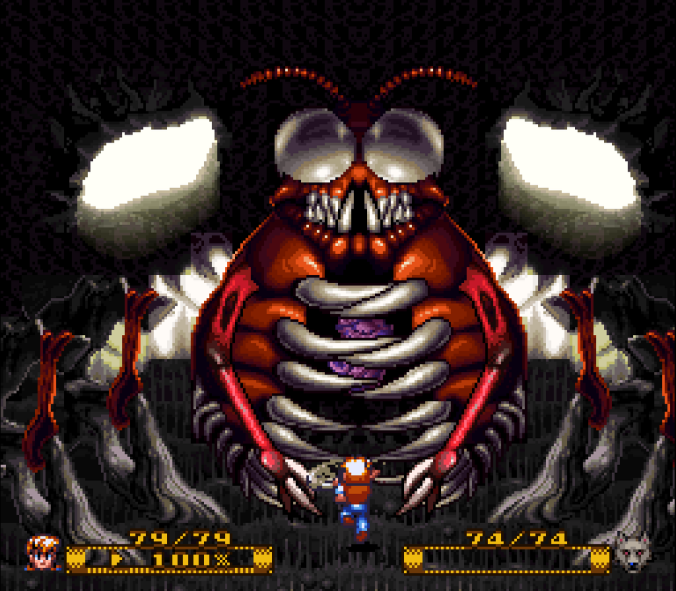 The problem with alchemy is connected to the game’s other big problem: it is horribly balanced. One area will be super tough, but it will be followed by one that is super easy. One boss will be little more than a speed bump, but the next one might be a game ending obstacle. One spell you get fairly early (Crush) is super powerful, but the effectiveness of alchemy is all around a crap shoot. The whole game just feels super uneven.

That unevenness is not particularly surprising given that this was a rookie team making their first game. It feels like a rookie effort. There are quite a few good ideas here and a lot to like, but the game also feels kind haphazard. It is a good game, but there are a lot of good action-rpgs on the SNES. Games like Illusion of Gaia or A Link to the Past. Secret of Evermore doesn’t belong in the upper echelon of SNES games, but it is a worthy addition to the system’s library and still decently fun to play today.