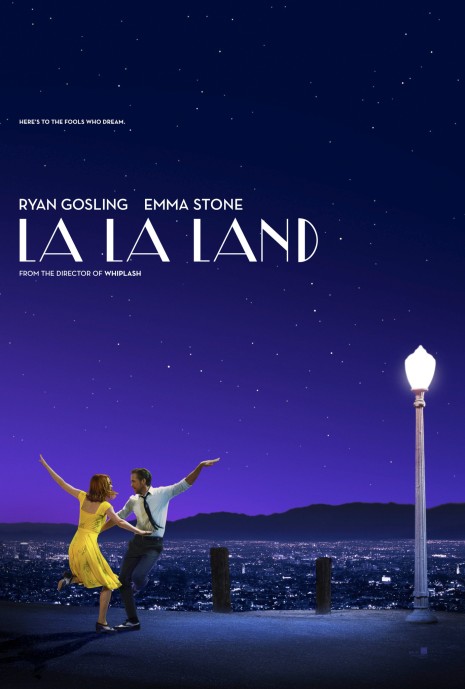 I had given up on seeing La La Land at a theater. While my local cinema had posters up for it for a while, they disappeared about two weeks ago. They pulled the same trick early in 2016 when they had coming soon posters up for The Nice Guys, which they never showed and consequently I never got to see on the big screen. But, miracle of miracles, it finally showed up last weekend. It is just as good as everyone says it is. La La Land is an inspiring romance

The movie stars Emma Stone as Mia, an aspiring actress working as a barista at the Warner Bros studio lot. She is cajoled into attending a party with her three roommates, which goes badly and her car gets towed. On her trek back home she wanders into the restaurant where Ryan Gosling’s Sebastian is playing piano. Despite some initial friction, they soon hit it off, with Seb sharing his love of jazz and Mia her love of old Hollywood movies. Both of them, however, remain unable to fulfill their dreams. Mia keeps getting auditions for lackluster parts and Seb is unable to pull together the funds to open up his desired jazz club. So when an old friend offers Seb a chance to play keyboard for his band, Seb takes him up despite not really liking the music. Meanwhile, Mia writes and performs a one woman show.

The plot is enjoyable, with a lot to say about performance and creation that I need to see it again to really unravel, but it is a secondary draw to the music. La La Land is a musical; a very enjoyable one. The opening number, with dozens of dancers breaking out in an impromptu performance on during a traffic jam on the highway is a sight. Tons of performers doing impressive routines all in one take. Amazingly, as good as that first song is it only gets better from there. There is the completely delightful “A Lovely Night” with the movie’s two stars beginning an infinitely charming romance during a song that starts with them complaining about each other. After a couple of complete showstoppers, “City of Stars” and “Audition”, it winds up with “Epilogue” a bittersweet look at what might have been.

That is what makes La La Land so amazing. It is a love story, among other things, that while it doesn’t end quite where you might expect, it is still a mostly happy ending. It is certainly not a traditional ending. That is the movie. Both Seb and Mia are fans of things that have long passed. The Hollywood that Mia loves doesn’t really exist anymore and the jazz that Seb idolizes is a fading genre of music. Much like how this movie is a throwback to old-styled Hollywood musicals. La La Land argues that it is important to remember the past, but not to be constrained by it. It is perfectly fine to love old movies or traditional jazz, but you can’t let that hold you back from change. There are certainly elements of that old thing that can be brought forward, like the musical genre itself, but maybe all of its genre trappings don’t need to be preserved. Does a romance have to end a certain way to be happy?

La La Land is a cut above most movies I see and review here. I tend toward populist genre fair. Honestly, that is what La La Land is, except its genre is not one that has shown that popular appeal recently. I don’t see how something like La La Land wouldn’t be pleasing to the majority of movie goers. It is utterly charming and uplifting.