Super Mario Land 2: 6 Golden Coins is not especially good. This really hurts to admit; it was one of the few worthwhile Gameboy games I owned for the first few years that I owned that machine. Playing it now, it is hard to deny that it is only passable because most Gameboy platformers are simply crap. It does improve on a lot of things from its predecessor, but many of those improvements come with drawbacks that make it hard to definitively say that it is the better game.

Super Mario Land 2 is certainly a better looking game than its predecessor. Mario looks more like the Mario from Super Mario World, which came out the year before, and each of the games six worlds is bursting with personality. It is also a bigger game than the first Gameboy outing, with 32 stages compared to the firsts 12. And all of those stages are platform stages, no weird shooter segments this time. There is more of that genuine Mario feel, with everything being on model, fire flowers instead of superball and no exploding koopas. 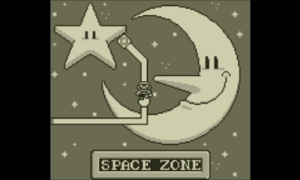 It does suffer in how it plays, though. The bigger, better looking Mario takes up a lot more of the screen real estate, meaning that the player can see less of the level. It is a problem common to Gameboy platformers, leading to too many blind jumps and cheap hits. The game also feels a little floaty. The edges of enemies and platforms are not particularly clear, again leading to cheap hits. It might be the worst playing Mario game that Nintendo ever made.

The game did give the Mario series Wario, the perfect secondary antagonist for the series. It isn’t like Evil Mario is the most original idea ever, but Wario as he evolved after this game is great. He was good enough here that he promptly took over the Gameboy series from Mario. The next game was Wario Land: Super Mario Land 3. Though it is called Super Mario Land 3, I am considering it a Wario game and including it in my Super Mario Replay.

Super Mario Land 2 is a game that means a whole lot to me. I played it so many times on cross country trips, as my family drove from western Missouri to Indiana every summer to visit relatives. I know the ins and outs of this game like no other game in the Mario series. Still, playing it now, with fresh eyes, it is hard not to notice its shortcomings. It is certainly an ambitious game, there are few Gameboy games that look better. But like most GB games of its ilk, it is a pale shadow of the home console games of the same time. It is trying its hardest to be portable Super Mario World, but that just isn’t possible on the Game Boy. I can’t say that it isn’t a worthwhile addition to the series, but it certainly isn’t the best.