I only managed to finish three books in March, but I’m pretty happy with where I am reading wise this year so far. I am fairly certain I will meet my yearly goal.

This Isaac Bell series has long been something of a guilty pleasure of mine.  This one, though, sort of missed for me.  As always, I love the setting and like this series fake Pinkerton Van Dorn organization, but the plot here was thin even by the standards of this series.  It ostensibly gets Bell involved with the new forming American Mafia, but also ties in some robber baron stuff and a potential Presidential assassination.  Usually these books tie their seemingly disparate plot elements together, this one doesn’t really make sense to me. It end up feeling like a big missed opportunity.  The stuff with the mafia and how that group, and similar Irish gangster groups, are appealing to immigrants is on the table.  The book kind of sets that up, but it quickly steps away because it isn’t interested in exploring that. Instead, of following through and developing a theme, it brings in a fictional robber baron to be the actual villain. He lends the already on the run gangster some protection while he enacts a plan to assassinate President Roosevelt.  All of the elements that usually make this series a lot of fun, but in this one they just didn’t come together.

N is for Noose

Another Christmas gift book, a stack which is rapidly shrinking. When I am gifted a book, I usually feel compelled to put it on top of my reading list.  This Christmas I asked for “mysteries” with no other guidance given, and that is what I got.  Reading the random smattering of books I received has helped me get a clearer picture of what I like and what I want.  After reading N is for Noose, I’m not sure more of Sue Grafton’s books are what I’m looking for.

I don’t mean to be harsh, it isn’t that I outright disliked the book, but I never shook the feeling that this isn’t really what I was looking for. Despite the fact that on a surface level this is exactly what I am looking for.  Maybe it is because I started with what appears to be the 14th books in a series.  One thing I did really like about N is for Noose is that it is a mystery where the mystery is what exactly the detective is investigating.  That is very unclear, let me try again.  It is a mystery about the lack of a mystery.  [] is called in to investigate even though there is no evidence or appearance of a crime.  The man she is looking into died of what everyone, even his wife who hired her, agrees is natural causes.  But something doesn’t feel right.  So she just has to poke around until she finds something, which she does because otherwise there is no book.  But that lack of central focus also makes the book kind of aimless for a long stretch.  When it all breaks, it breaks really fast and just sort of explodes through the end.  Our protagonist doesn’t find anything out, she just spooks people with something to hide until they uncover it for her.

I mostly enjoyed N is for Noose, but it didn’t quite scratch my mystery itch like I wanted.  The only things I’ve found so far that do are from Golden Age of Mystery writers, like Christie or Sayers. 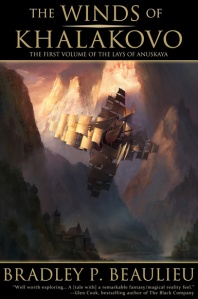 The Winds of Khalakovo

This is the first book in a fantasy series that I listened to as an audiobook. That makes it hard for me to judge it fairly I think. I liked parts of the book, but I had some problems with it. How can I be sure those problems didn’t arise from listening to it rather than reading it myself? Not knowing for sure makes me a little unsure of my feelings toward this book.

The Winds of Khalakovo is set in a very Russian feeling fantasy world, with many Russian or Russian sounding words used to create it sense of place. There are lots of nyets and das. It follows tow nobles who are readying for an arranged marriage, Nikandr and Atiana, as well as Nikandr’s low born mistress Rehada. The three of them move through the book as the tense political situation on the island where Nikandr’s father rules explodes. That political situation is quite complex, with multiple Duchies at each other’s throats and a conquered/colonized people split into a few factions who disagree with how to deal with the ruling class. Then there is the equally complex magical system. Each of the three protagonists is sympathetic, though the supporting characters are much harder to get a read on.

My big problem with the book is one of timelines. Frequently there seem to jumps in time in the middle of ongoing scenes, with a character doing something and people reacting as if it had been done hours or even days ago. Someone will be preparing an escape only for the next sentence to refer to escape as having happened in the past. This problem might be due to me listening to the book instead of having it in my hands, reading it. If I was reading it myself I could thumb back and make sure I had everything straight, with the audiobook it just keeps going. Even with my flipping back and forth I still read faster than the audiobook goes, but I can’t read it at work that way. Seemingly every few chapters the book jumped forward, with what had been brewing actions having happened I guess when I let my concentration lapse. I can’t know for sure if this is a problem with the writing or if I wasn’t listening attentively enough. I didn’t kill my enjoyment of the book, but it made things feel unsatisfactorily scattered.