That might be a too harsh assessment. There are some new and interesting ideas. The Giant and Mini mushrooms are good ideas, even if one is mostly pointless and the other is an over-used secret generator. I also had some fun with the turtle shell power up even though it is as dangerous as it is helpful. And while it doesn’t feel like it is breaking new ground, it also isn’t directly copying any of the previous games in the series. It takes from all over the series. The world map feels very Mario 3, the gameplay feels more like Super Mario World. The secrets in the level, with 3 hidden coins to find while poking around mostly linear levels, feels a lot like Yoshi’s Island. While Nintendo put “New” in the title, it is clearly a backwards looking game. 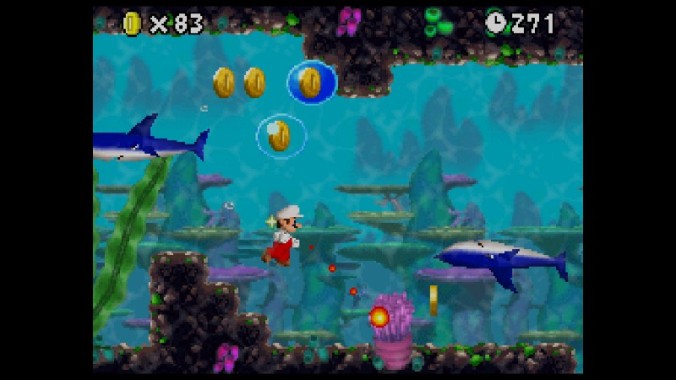 I don’t think New Super Mario Bros holds up too well compared to other Mario games. It was successful because it was being compared to no Mario games, which it is clearly much better than. However, it lacks the spark that most of the other games have. Each of the original run of Mario games felt like an event. It was something new and different and exciting. NSMB feels like a reminder of that feeling. It feels like all old Mario games and somehow none of them. It is creating something new, because no Mario game looked or played like, but doing everything it can to feel like something old.

It also feels like Nintendo was stretching muscles they hadn’t used in a long time. It is occasionally rough, with some weak levels and too many secrets hidden behind mini-mushroom pipes, but you can almost feel the development team learning how to make this sort of game as they go. Which is why I think each subsequent New Super Mario Bros game is better than this one. This was a proof of concept, and Nintendo learned that both they could still make this sort of game and that this sort of game will sell.

For all that this game lacks the spark of the games that made Mario Mario, it is still a very good game. I did speed through it in about six or seven hours over two days. It is a lot of fun. Not gold standard, best game of all time fun, but solid fun. That is something that the Mario series has never failed to deliver. Even if this game was junk, the fact that it seems to have been the impetuous for the ongoing Mario renaissance more than makes it worthwhile.