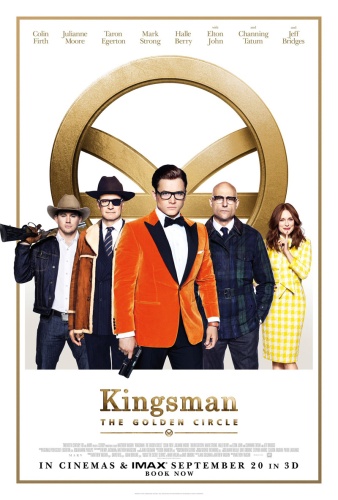 It is not often that a movie repulses me quite like Kingsman: The Golden Circle did.  It is a nasty, callow, mean-spirited, empty film that tries to play itself off as a gleeful romp despite being utterly devoid of anything that could cause glee.  Even so, I would feel more charitable if I could find one thing to point to that it does well to offset its soul destroying vulgarity, but there is nothing here.

The closest to a positive thing I can point to in Kingsman: The Golden Circle is its cast. Even a movie as generally revolting as this can’t completely disguise the charms of actors like Mark Strong, Colin Firth or Channing Tatum.  Even when you toss in a happily sleepwalking Julianne Moore, a blink and you’ll miss it appearance by Jeff Bridges and an altogether bland showing from Halle Berry, the cast makes you really want to root for this movie.  Too bad about the movie itself.

It is mean-spirited, and it shows this right from the start.  After a brief, weightless action sequence which ends with the protagonist Eggsy literally covered in shit, it switches to Moore’s villain Poppy, who has one henchman toss another head first into a meat grinder and then she serves the survivor a hamburger made from his friend.  Of course, this is the villain; we expect them to do awful things.  But the world at large, including our heroes, is no better.  All along I was expecting at least one character to repudiate the vileness that permeates nearly every character’s actions, but instead they continually double down on it.  Eggsy attempts to plant a tracker on one of the villain’s girlfriends is not dissimilar to many of Bond’s seductions, though for Bond the mission is usually information and the sex is just a bonus; this is a calculated plot for the protagonist to paw at a woman’s crotch.  Maybe some of it is the usual Bond spy stuff taken to what is intended to be a humorous extreme, but all it ends up doing is feeling gross.

The action is also a disappointment.  There is one good sequence, but even that one is heavy on the CGI. The movie tries to go over the top, but it just makes everything feel hollow and empty.  There is a car chase that is supposed to be the big opener, but Baby Driver came out just a few months ago, I know what a good car chase looks like.  Or hell, I could look at Mission Impossible Rogue Nation or The Man from UNCLE, all of which feature better car chases than that.  The action in the gunfights is clear, but there is no weight to anything. It just happens.

I should have known better than to go see this.  It is based on a Mark Millar property, if not on an actual story he wrote, and I know how much I detest his writing. But some people really talking up the first, which I skipped, and a dearth of other options led me to seeing Kingsman 2.  This movie is permeated with Millar’s brand of immature, edgy stupidity.  There is nothing here to recommend.

2 thoughts on “Kingsman: The Golden Circle”