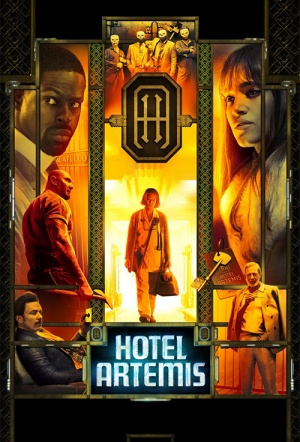 Hotel Artemis had all the makings of being a cult hit like John Wick, but in the end it just doesn’t quite come together. The movie is filled with so many interesting characters and ideas that it really hurts when the whole turns out to be less than the sum of the parts. Still, the movie is entertaining throughout and while it leaves you wondering about what might have been, there isn’t a whole lot about what it is to dislike.

The Hotel Artemis is a near future hospital for criminals. It has strict rules about admittance and membership. When a bank robbery goes wrong, a pair of brothers show up at the hospital, taking on the names of their rooms, Waikiki and Honolulu. The Hotel is run by Nurse and her assistant Everest, who rigorously enforce the rules, as show by Everest kicking out one of the brothers’ accomplices who is not a member. Also at the Artemis is a nasty little man called Acapulco and and Waikiki’s former lover Nice, an assassin. As they enter, riots break out in the streets, which leads to Nurse breaking her own rules to take in a cop that was a friend of her son, only to find that the Artemis’s benefactor, The Wolf King, is coming to have some injuries tended.

The plot keeps building and the view is stuck waiting for a explosion that never really comes. It helps that the cast is amazing. Jodie Foster plays Nurse and instills in her a marvelous combination of vulnerability and competence. Dave Bautista is Everest and doesn’t really press his range in being large and intimidating, but does it so well. The same is true for Charlie Day as Acapulco, who is at his snide, insufferable best. Sterling Brown as Waikiki is the solid center for all the rest of this to build around and Sofia Boutella is great as the mysterious Nice. Lastly, Jeff Goldblum shows up near the end to play the amiable, but dangerous Wolf King.

For most of its runtime, Hotel Artemis keeps adding wrinkles to its plot. There are the riots; there are stolen diamonds; there is a planned assassination; there is Nurse’s past; there Honolulu’s drug problems; and there is the Wolf King’s angry son. You can feel the tension ratcheting higher and higher as everyone starts to break the rules and become compromised. Then it ends. It feels like there should be another act, or at least another scene, but instead it builds to something of an anticlimax.

Until the end, I would say that I loved Hotel Artemis. It is creative and wild and interesting. But it feels like it didn’t know what to once it had introduced everything. So it just sort of let each of its little plots come to their own little resolution without any of it coming together in a meaningful way. It leaves you not so much wanting more, but wishing it had been more.