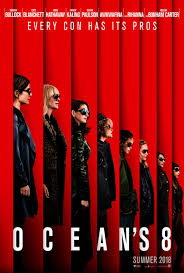 Ocean’s 8 is the perfect summer movie; a spritely and buoyant delight that is fun throughout. It almost exactly, and certainly deliberately, follows in the footsteps of Ocean’s 11 and while at times it feels something like a pale imitation, it largely manages to carve out its own identity next to its classic sibling. While it doesn’t really break any new ground, it executes a fun formula well and lets a lot of fun performers show off.

Sandra Bullock plays Debbie Ocean, the sister of Danny Ocean, who has just gotten out of prison and has an idea for a heist, as the Oceans tend to do, and maybe for revenge on the man who set her up and sent her to jail. She meets up with the partner, in crime at the very least, Lou (Cate Blanchett) and goes about assembling her team to steal the Tousssiant, a diamond necklace worth 150 million dollars.

It mostly goes along the usual heist formula. It introduces all the players in their elaborate plot, giving each a chance to show off her skills. The plot mostly involves getting a celebrity to borrow the necklace to wear it to the Met Gala, where they can steal it. The biggest part of the plan involves recruiting fashion designer Rose Weil, who gets hired to design the dress for Anne Hathaway’s Daphne Kluger. Kluger is not in on the heist and her unwitting participation is one of the most delightful elements of the movie.

The other members are fun, if somewhat underutilized. Wanting to see more of Rihanna, Awkwafina, and Mindy Kaling makes the idea that this might be the start of a series a promising prospect. The most underused member of the cast is almost certainly Sarah Paulson as a fence who is also a suburban housewife with a shocking awway of skills. This crew deserves to push the series back up to 11.

Then there is the heist, which goes off without much of hitch, though it is still tense and delightful watching it all play out. As these things do, the movie keeps certain elements of the plot from the viewers until they happen, letting it be a surprise as it all comes together. Sometimes these late coming twists can sour the experience, but here each works perfectly. I don’t want to spoil the best ones.

It isn’t quite as good as last year’s Logan Lucky, but it still completely fun and enjoyable. It has a great cast and a glitzy look and keeps the action moving. It is a little derivative and familiar, but Ocean’s 8 is also so much fun.