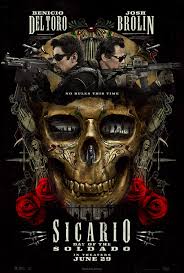 The first Sicario was a look at the drug war that put the viewer in the shoes of Emily Blunt’s FBI agent Macer as she was exposed to the moral rot that it involved. It invited the viewer to join in her alienation as the tactics of the good guys became essentially indistinguishable from the bad guys. Sicario: Day of the Soldado, still wants to have that moral complexity, but other than a few echoes of the original it manages none of it. The fact that it works as well as it does rests entirely on the shoulders of Benicio Del Toro and Josh Brolin, who is having quite a year.

Sicario Day of the Soldado starts with some histrionics about imagined border security fears, with Muslim suicide bombers sneaking through the Mexican border to attack American grocery stores. It is a disgusting bum note that the movie never quite manages to recover from. It does give an unneeded in to introduce Matt Graver (Josh Brolin), a CIA operative who is busy torturing someone suspected of facilitating the suicide bombers. The US government has decided to treat the Mexican Cartels like terrorist organizations and wants Graver to bring his expertise to disrupting the cartels. He starts a plan to kidnap the daughter of the head of a cartel and frame another cartel for it. He brings along with him Alejandro Gillick (Del Toro), a mexican hitman he worked with in the past. Things go awry, as these things do, and Alejandro and Matt end up on opposite sides of the border and the conflict. Weaved inelegantly through the thriller is a plot line about a kid who gets caught up with the gangs starting by helping people cross the border for some cash.

Without Blunt’s character, the movie has no heart. The first half shows only the moral emptiness, with nothing to compare it against and making no real comment about it; it merely shows the blackness. About midway through, it turns into something of a straight up Western, and the two amoral operative suddenly develop at least the inklings of a conscious. It works for Del Toro’s Gillick, because it fits with his motivation. For Graver, it comes out of nowhere and makes little sense. The plot with the kid is as bleak as it could possibly be, but the movie doesn’t let the viewer inside of his thoughts to any degree at all, making it hard to tell if this is a drifting or just how he always was.

The end is where the movie really falls apart. It has no themes to tie together and no interest in delivering some kind of exciting final act, so it just sort of peters out with unsatisfying conclusions to its various plots. Some of them barely explained. Were I feeling generous, I might say the movie is leaving the viewer unfulfilled so they can chew on the movie’s meaning, but the movie doesn’t manage to have much of meaning, leaving the viewer simply underwhelmed.

Ignoring the movie’s either disgusting or muddled politics, as an action thriller it is fairly well staged. Its few actions scenes are tense and exciting. Brolin and Del Toro both deliver very good performances that make it easy to forget how unnecessary this sequel is.

One thought on “Sicario Day of the Soldado”