Suikoden V is a game with one very clear goal: to be as much like Suikoden II as possible. That is evident in every fiber of the game. It is a pretty big change from the previous PS2 Suikoden games. Suikoden III came out in the wake of Final Fantasy X and is an ambitious game that bites off a little more than it can chew and is just a little out of sync with the times. Still, it feels like game trying to push the genre forward in a way that the 16-bit throwback PS1 games didn’t. Suikoden IV feels like a game trying to keep up with the big boys of the genre, but manages to sand off a lot of what made the series unique. (I used to hate Suikoden IV, but while I still consider it the weakest mainline entry in the series, I’ve softened on it lately) Suikoden V, despite its charms, feels a bit like the series giving up and grasping at ties to the series most popular entry in an attempt to recapture its fans.

I don’t know if Suikoden V was truly low budget or if it only feels that way. I assume it didn’t have close to Final Fantasy money tossed around during development. It is riddled with bugs and inconveniences. But it also feels cheap because its odd camera angle. Suikoden V’s camera is static and position as close as they could get it to the 2D games. While the character models are fine, the how zoomed out everything is makes it feel really small. You can zoom the camera in, but it doesn’t change the angle, so it mostly just cuts off the player’s view. Everything about the game’s presentation screams reminders of Suikoden II. As a fan of that game, it is comforting, but it does little to account for the difference between 2D and 3D games. It just feels very low budget. The game also goes back to the six person party, but eschew’s the pairs system from Suikoden III, and most of that game’s skill system. 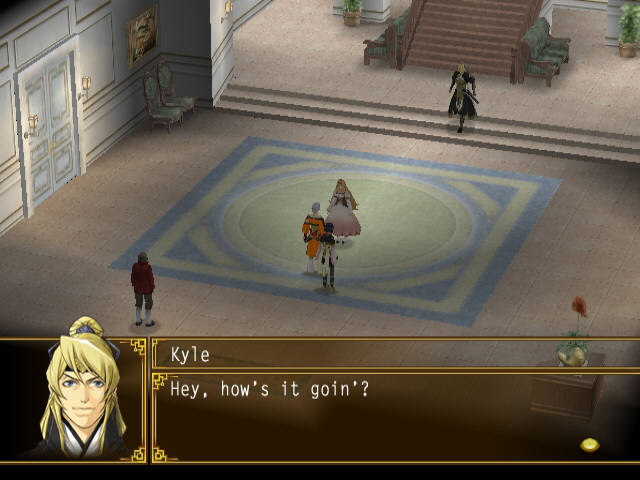 One of the strangest ways that Suikoden V echoes Suikoden II is that it has alternate Stars of Destiny. Among its 108 Stars, Suikoden II had a couple that were mutually exclusive. At one point the player has the option of picking one of two returning characters from the first game to be the representative of the Toran Republic, country where first game took place, the one you don’t choose never joins your army. There are also a trio of monsters to recruit, though only two of them get to be stars of destiny. As far as I recall, none of the other games do this. Except Suikoden V; it has a pair of mutually exclusive stars. Except having them be so doesn’t really make any sense. The two mutually exclusive stars are Eresh, a tiny mysterious wizard with ties to series mainstay Jeane and whole extra dungeon (extra section of dungeon) to flesh out her (?) story and Euram Barows, a secondary antagonist who plays a big role in the story from the start. Eresh is a side character with marginally more to do than the bulk of the lesser stars. Her and her connection to Jeane are some of the more interesting incidental parts of the game. Her dungeon, the big hole, is left completely unexplained if you do not recruit Eresh. Having her be an optional recruit, when there are so many lesser characters, is an odd choice. Making Euram an optional character does make sense, though his being optional kind of leave his arc potentially unresolved. Euram is a worthless little shit throughout the game, starting as an ineffectual ally before switching to an ineffectual nemesis. He starts the game in a position of power and loses everything, mostly through his own incompetence, but unless you make him the last recruit to your army, his story line just kind of disappears. His plots to discredit the protagonist have all failed, his father has been killed and his sister has disowned their family. Him joining up brings it all full circle, he has learned from his experiences and is ready to help fix things, if he doesn’t join he is just gone. I like that the game gives the player the choice whether to let Euram have his redemption or not, but the fact that adding his useless behind to the army means going without Eresh makes it a lopsided choice. It is a choice I believe the game would be better off without.

While the game doesn’t pick up on any of the big mysteries left simmering after the first three games, mostly dealing with the Harmonia and Pesmerga and Yuber, it does bring in some characters mostly because they were included in II. The big one is Georg Prime, who in both games is a serious badass. Basically the whole story of this game springs out of one detective investigation of Georg from II, which alludes to his history in Falena, which is one of the few mentions of the country before this game. V also returns Killey and Lorelai, a pair interested in the Sindar ruins. This is Lorelai’s third appearance in the series, but Killey had previously only appeared in II. The two of them are investigating the Sindar, a mysterious ancient race that is connected to the True Runes that end up important in most games in the series. While V offers no more answers than any game in the series, it at least gives a few clues.

At the point I am at in the game right now—I just saved the ravaged town of Lordlake and finally my army has a castle for its headquarters—it is clear that the pacing of events also echoes Suikoden II very closely. This is harder to define, but the rhythm of new area to story sequence to dungeon to army battle feels very familiar. This is where the game shines, I might like the protracted opening even if no one else does, but once the game gets past that and kicks into high gear it is one of the most enjoyable games on the PS2.

I still have a lot I want to write about with Suikoden V. The character Sialeeds, the story in general, some of my favorite minor characters. I feel like as soon as I publish this I am going to remember a lot of the stuff that connects this game specifically to Suikoden II and curse myself for not including it, but I’ll find a place to put it in.