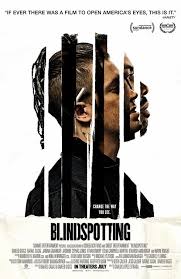 Blindspotting is powerful. It does an amazing job of balancing a high wire act of presenting a very real world but breaking from that at moments to add to the effect of the movie’s most powerful moments. It might not work for everyone, but I found it to be one of the most enthralling movies I’ve seen this year.

Blindspotting stars Daveed Diggs as Colling and Rafael Casal as Miles, two best friends living in Oakland. Collin was previously convicted of a felony and is nearing the end of his probation. He is trying to avoid any trouble. Meanwhile, Miles is a magnet for trouble, buying an unlicensed gun near the start of the movie and waving it around everywhere. They work together for a moving company. Collin’s former girlfriend works at the counter for that moving company. Miles lives with his girlfriend and their young son. With three days left on his probation, Collin witnesses a cop murder a man. The movie follows him for the next three days as he continues to try to keep his head down and stay out of trouble, despite Miles insistence on drawing as much trouble to himself as possible.

The movie deals deftly with so many issues. There are class issues, with the area where Collin and Miles grew up steadily gentrifying, with the lower class settings of their youth being replaced with more well to do facsimiles. There are now vegan burgers at the fast food place and expensive green juice at the convenience store. The two movers are always seen moving people out, never in. Often they are dealing with the remains of a family home with many affects left abandoned inside. These problems also touch on the movies racial musings. Collin fits in, visually, with the old Oakland because he is a big black guy. Miles works overtime to show that he is ‘street’ because as a white guy he is frequently mistaken for one of new hipsters in town. It is an advantage to him, since he can move in both worlds, but he considers it an insult. That also plays into how Collin ended up in jail; the idea that the world treats these two friends differently based on their race. Blindspotting plays it smart by mostly leaving the cop shooting in the background. It is always there and just like Collin the viewer is always aware of it, but he just has to go about his life regardless of what he saw. It builds, though, throughout until the movie gives viewers one of the most tense scenes I have ever seen.

Where the movie does some of its best work is in showing why the fairly mild Collin sticks with the erratic Miles. The bond between these two childhood friends is something that nearly everyone can relate to. Collin knows both that Miles is likely to get him into trouble and that despite his nonsense Miles is a good guy. Both things are true and while it seems pretty obvious that getting away from Miles is likely the best thing Collin could do, it is is easy to see why he won’t abandon a friend that never abandoned him.

Blindspotting is masterful. Wonderfully written and acted. Everyone should go see it.