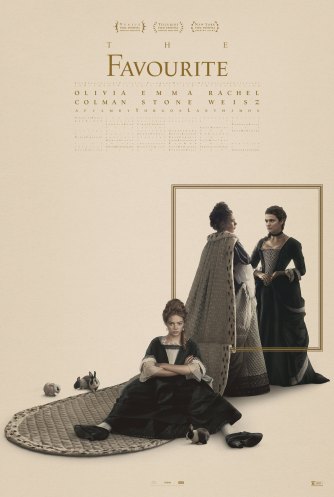 The Favourite turns a story of the political machinations of the 18th century English court into a brilliant, witty comedy. It plays fast and loose with historical accuracy, but that really isn’t the point and it doesn’t diminish what is one of the funniest and smartest comedies of the year.

The film is centered around three excellent performances. Emma Stone plays Abigail Hill, a young noblewoman who has fallen on hard times who has come to seek help from her cousin. That cousin, Sarah Churchill, played by Rachel Weisz, is the current power behind the throne, running Queen Anne’s court with an iron fist. Olivia Colman plays Queen Anne, a physically and psychologically weak Queen who tries to do her job well. The Queen holds all of the power, but lacks to ability to actually use it, and Abigail and Sarah jockey for the position as her favorite to have the power turned to what is important to them, while also being generally kind of mean to everyone around them. All three are great performances. Sarah essentially controls Queen Anne. They have been friends all their lives, and Sarah knows how to manipulate and goad Anne into seeing things her way. Their balance is upset with the arrival of Abigail, who at first is hired as a maid but works to make herself indispensable to both Sarah and Anne. Abigail does not want to return to the life of hardship she has known and will do nearly anything to insulate herself from that. Sarah wants to maintain her position and the Queen needs genuine human contact.

The Favourite does an amazing of getting the viewer to change their sympathies over the course of the movie. At the start, Queen Anne seems weak and easily manipulated, Sarah ruthless and Abigail tragic. The movie starts the viewer in Abigail’s corner, with her stories of hardships contrasted against the lavish lives of those living in or near the royal palace. The movie then reveals more about Sarah and Anne that changes how you view them. Anne is weak, but she has also undergone many tragedies in her life and is shown to want desperately to be a good Queen. Sarah, meanwhile, is revealed to actually care under her prickly exterior.

The women take center stage, there are men on the outsides. Nicholas Hoult plays Robert Harley, a political enemy of Sarah and just a complete ass. There is also Samuel Marsham, the almost complete nonentity that ends up married to Abigail. They are there, but the structure of the movie keeps them on the margins. Marsham only matters to Abigail because he is how she get stability. As soon as that is achieved, he is all but forgotten.

Where The Favourite really shines is in its pitch perfect script. It may dispense pretty quickly with historical accuracy, but man it has some great dialogue. Most of it delivered perfectly from Weisz or Stone. Whether it is Weisz’s withering, perfect put downs of the puffed up clowns at court or Stone’s more vulnerable and slightly veiled shots at other characters, it all works.

The Favourite is a purely enjoyable movie. It has some fairly dense psychological underpinnings, dealing with the nature of power and the machinations of those close to it, layered into a wonderfully smart and witty comedy.

One thought on “The Favourite Review”