On a whim, I rewatched The Hitchiker’s Guide to the Galaxy movie on Netflix a couple of weeks ago. Afterwards, a bout of curiosity led me to look up the movie on wikipedia, which took me down a rabbit hole that left me shocked to discover that The Hitchhiker’s Guide to the Galaxy is not a particularly well regarded movie. I was foolish enough to think it would be loved simply because it is great. Instead, it seems stuck in that that weird gray zone where fans of the previous versions don’t like it because it changed some things and non-fans don’t like it for a combination of thinking they are missing too much for not being familiar with the radio/book/tv version or were just never going to like it because Douglas Adams had a particular voice and that voice was understandably not for everybody. I really only understand the last one. The Hitchhiker’s Guide to the Galaxy movie is an excellent movie in its own right, even if isn’t the definitive version of the story.

Part of my disconnect is likely that I backed into The Hitchhiker’s Guide. I saw the movie first. I loved it. Being the reader that I am, the first thing I did after watching it was track down the book. Which I also loved. I haven’t returned to the book much, mostly because nearly all of the best bits are in the movie and it can be experienced in less than two hours. I didn’t get deep into Adams; I didn’t read the rest of the series or any of his other work. I just moved on to other things, and this movie became a pleasant memory from college. 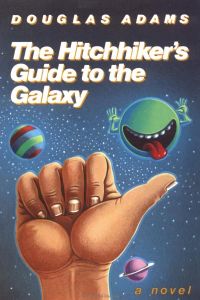 In reading up on the movie’s reputation I found numerous complaints about how the movie missed the spirit of the earlier versions, which I find preposterous. That spirit, embodied by clever wordplay, sly jokes, understated darkness, and general absurdity, is in the movie in spades. The movie translates most of the first book word for word; the first book is just really short. I reread the book after rewatching the movie; I still think the movie got most of it. Not everything translated off the page perfectly, and some portions weren’t really attempted, but the heart of the book come across perfectly.

After reading the book, I watched the 1981 TV version on Amazon, hoping it would provide the Rosetta Stone for understanding why fans of the property were not especially big fans of the movie. It did, in a way. (Here’s the line that would get me hate mail if anyone read my blog.) The TV version reminded me forcefully that nostalgia is a hell of a drug. This version looks cheap and is so shapeless and meandering as to make the book look like it was plotted with clockwork precision. The book already had a tendency to just move on to the next thing when it was done with the joke. The TV show does the same, except the pacing of each scene is bloated and sagging. Structurally, the show is barely a show at all. It feels much like a sketch show, with each episode moving to a completely different setting and concept that just so happens to carry over some of the same cast. A lot of it feels like a radio play set to film. All the acting is done in the dialogue; there is little of interest actually happening on screen. This is not meant to be read as a screed against good dialogue, only to note that TV is a visual medium and maybe the show should have had something worth watching on screen. There are some good creature designs, but it is mostly a lot of people standing and talking. Two-headed Zaphod is a straight up disaster, with his second head being almost as well realized as the one on Michael Scott’s halloween costume. The show simply looks bad. 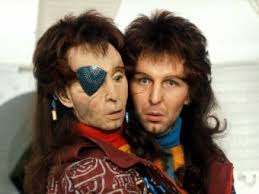 This. This looks really bad.

A lot of disdain for the movie came from people praising the TV show and I simply don’t get it. I can understand people not liking the changes and additions (more on those later) to the movie from the book, but the TV show praise is baffling to me. A lot of that praise is for the performances, although the reasons for that, other than simple nostalgia, elude me. Again, many of these feel like performances for radio. They recede on screen, leaving the settings to do a lot of the acting. It makes it hard for me to even compare the performances. Zaphod is fine, though he seems to be struggling under the costume to give the character any energy. David Dixon makes Ford the most dynamic character on the show, but even he has a tendency to get lost in the shuffle. Simon Jones as Arthur Dent suffers the most as the show goes on. He is great early, but as the other characters show up, he all but disappears, even when the rest of the cast actually disappears. Trillian is a mess. I guess I see how people who grew up with these versions could prefer them, but they are mostly just fine mouthpieces for good dialogue that bring little else to the table. Honestly, I am glad the TV series was not the first version of The Hitchhiker’s Guide to the Galaxy I experienced, because I doubt I would have been a fan.

The movie, though, does have quite a few changes and additions from the book. Mostly, those are in the name of giving some form to the shapeless book. Part of the charm of the book—and the TV series I assume—is that scattered nature. It starts big, with the destruction of the Earth, but after that things just sort of happen. Revelations come fast and frequent, usually with little bearing on what came before it or what comes after. That was never going to fly in a movie version. So it added something of a quest to the search for Magrathea, which was something of a fait accompli in the book and show. Now, the crew has to get directions from Zaphod’s enemy Humma Kavula, which leads to a detour to Vogsphere. Those things were added for the movie. Honestly, they fit in almost seamlessly, though some of the humor is a little slapstick. Not significantly more so than stuff like a sperm whale crashing to the ground from outer space, but there is some. Outside of a knee-jerk dislike of everything new, there are two differences I’ve seen get a lot of hate. Understandably is the change in the nature of the relationship between Trillian and Arthur. Adding romance is the one change that really feels like a Hollywood change and not just an “accepted rules of storytelling” change. The romance is not needed to for cohesion or structure, it is just there. It doesn’t ruin the movie or anything, but if feels somewhat unnecessary. Inexplicably, people also hate the opening musical number. “So Long and Thanks for all the Fish” is a delight. Opening the movie with a satirical musical number ostensibly sung by dolphins tells the viewer exactly what they are in for. It is visually interesting, something the couldn’t be done in the book; it does, however, bring in something from the book in a visually interesting way.

I watched the movie again after rereading the book and watching the show. My esteem for the movie is undiminished. I love the cast; they are almost to a person better than the show performances. I guess I understand how people could prefer Dixon’s Ford to Mos Def’s chill version, but I liked Def’s take. It works with what is in the book. Otherwise, movie performances all the way. Especially Sam Rockwell’s Zaphod, who is an energetic mix of George W Bush and Elvis. Seeing people crap on the musical number to start the movie, then watching that musical number again cemented for me the idea the movie was never going to be successful. It had been too long and fans had too strong an idea of what had to be there for the movie to work. So movie gets dinged because some mildly funny dialogue got left on the cutting room floor or a stinger joke just before the credits suggest that the restaurant at the end of the universe is at a certain place and not a certain time. I mean, the movie left out all the jokes about digital watches. How can it purport to be The Hitchhiker’s Guide to the Galaxy without jokes about digital watches?

The movie is not a perfect translation of the book, which is what it most closely mirrors. But it it certainly a more effective film translation than the TV series. I might track down the radio version some day; I am not opposed to audio only entertainment (note: I should write someday about how I first experienced Star Wars through the radio versions). Maybe that version is the best version. For now, I’ll stick with book as the ideal form and the movie for when I just need to be entertained. On its own merits, the movie is excellent.