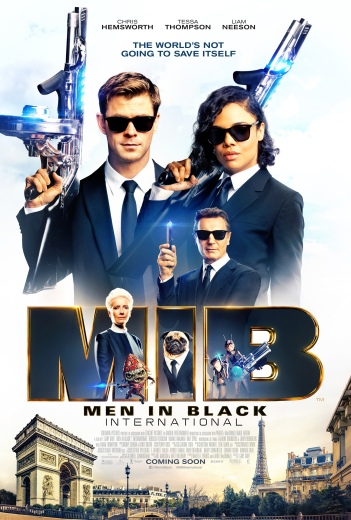 In most ways the fact that Men In Black International landed with a widely ignored thud was predictable. Yes, it has two movie stars in Tessa Thompson and Chris Hemsworth at the front, but I get the feeling that no one wanted this. It is continuing a series that, for all that the third installment was quite successful, seemed to have run its course. It is also continuing that series without any of the cast that made that series a hit, a problem for movies largely sold on the mismatched buddy cop pairing of Will Smith and Tommy Lee Jones. Which is why I was surprised that MiB: International was actually quite fun.

To be clear, the movie isn’t breaking any new ground, nor does it appear to be trying particularly hard. Instead, it jumps into the playground set up by the previous movies and just sort tells a story in it, relying on the charm of its stars to really sell things. The only real difference between this movie and the original is that you’ve seen all of this before.

The weakest part of the movie is its nested opening. It starts in 2016, when Agent H and High T (a joke that certainly doesn’t get old), played by Chris Hemsworth and Liam Neeson, arrive at the Eiffel Tower to repel an alien invasion. Before we see them victorious, we cut to 20 years earlier, when young Molly witnesses an alien and her parents getting their minds wiped by Men In Black agents. Then it cuts to the present, with the now adult Molly trying to join the Men in Black. It is more disorienting than it needs to be, though all of it is relevant by the end of the film.

Without spoiling much, Molly, played as an adult by Tessa Thompson, does eventually find the MiB, gets recruited as an agent, her designation being M, with her first mission sees her sent to the London office, for training and because O thinks there is something wrong there. While there, she is teamed up with Hemsworth’s Agent H, whose reputation is some combination of prodigy and wash-out, to first babysit an alien dignitary and then investigate why that alien was attacked. That investigation takes them around the Mediterranean and the Middle East as they learn about a renewed threat from the aliens that H and T defeated at the start of the movie. This is compounded by M learning that there is a double agent within the London branch and not knowing who that is.

The movie mostly coasts on the charm of Thompson and Hemsworth, and a movie can get pretty far on their charm and chemistry. Hemsworth, as always, is much more interesting as a talented, overconfident screw up than just a traditional hero, and Thompson works as the level headed outsider. It is like a strange inverse of the Smith and Jones pairing, with the experienced agent being the brash one and the newcomer the calmer one. At times the movie hints at a romantic pairing between the two, which us unsuccessful and does not work. The movie also kind of loses the secretive nature of the organization. It is still nominally secret, but that secrecy is hard to maintain with how blatant they are about the alien’s existence at times.