I was prepared to give Crash Bandicoot 3: Warped an hour or two, conclude that it was roughly the same as the previous two entries in the series and move on to Spyro 3: Year of the Dragon. I had already all but concluded that the PS1 Crash Bandicoot games just weren’t for me. I didn’t begrudge the people who do like them, but I didn’t consider them among the cream of the early 3D platforming crop. Honestly, I didn’t really find the first two games worth my time in 2019. I was only sticking with the game to keep up this gimmick of writing about Crash and Spyro in tandem. Then I started playing Warped.

I can’t articulate why or how, but this game just feels better than the previous two. It has all the hallmarks of the third game in a series on a console; the built up junk of repeated iterations trying to make something new without actually innovating. There is nothing I can point to and say that Crash Bandicoot 3 does better than 1 or 2. All I can say is that I really enjoyed playing it. It just feels like the game that all three of the games in the series should have been.

There are things in Crash 3 that should be the signs of an aging series. There are a lot of weird gimmick levels. Some with Coco on a jet ski, some with Coco riding a tiger, a few with Crash on a motorcycle, a few underwater levels. a level with Crash flying a biplane. With only 25 or 30 stages, having a full third of them being something other than the traditional stages should be a point against the game. But most of those stages are fun. They largely don’t completely change the game, they just put it in a different context. I hated the motorcycle races, but otherwise they were a lot of fun. That leaves a dozen or so regular stages. They are the same mix of fun and frustrating as before, though I encountered less of the frustration. The jumps still have that arc that I haven’t quite mastered. I still have a hard time judging distances going forward, though I learned to use the slide more than the spin as an offensive weapon in that context really lessened that problem.

It all just worked for me this time. There were some small frustrations, but I found Crash Bandicoot Warped to be a solid game. Especially considering its vintage. It almost makes me want to go back and give the first two another look. Almost.

While I went into Crash Bandicoot 3: Warped with little in the way of expectations, I went into Spyro: Year of the Dragon a little wary. I loved Spyro the Dragon, but Spyro 2 left me cold in the worst way. It wasn’t that the game was bad, but that it frustrated me in so many small ways that my memories of playing have curdled. It likely isn’t fair to the game, but I went into Spyro 3 scared that it would continue a downward slide. It is one thing to not like three straight games, it is another to love one and have the sequels disappoint. Luckily, Spyro: Year of the Dragon did not disappoint. 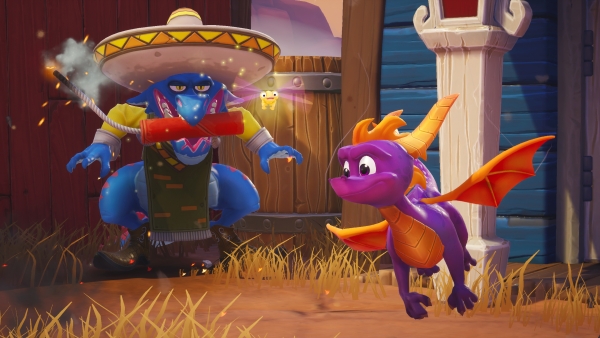 The game is not quite as good as the first, but Year of the Dragon was still a delight. It wisely gets rid of Spyro 2’s annoying upgrade system. Spyro has his abilities and those abilities are pretty static. For the most part, stages seem a little more simple, at least the Spyro sections. (I’ll have more to say about that clarification in a second.) Not every dragon’s egg, which are this game’s macguffin of choice, are hidden behind an elaborate set piece. Some are just hidden off to the sides of a stages, in well crafted nooks and crannies. For the most part, it plays just like the previous two Spyro games. You collect gems and find some other doodad.

There are different sections. Spyro meets a handful of allies on his quest and they are are playable at specific spots. They play close enough to Spyro that it is not completely jarring, and some of the sections actually add a fun dimension. The least enjoyable ones, aside from some of the weird one offs with the Yeti, are those featuring the monkey Agent 9 with a sort of proto-Ratchet and Clank style gameplay. Then there are the sections that kept me from 100% this game like I did with the first; the skateboard sections. Yes, I realize that Tony Hawk’s Pro Skater was popular, but these are out of place and frustrating. They show something that often crops up after a few games in a series.

Both of these games illustrate a problem that often happens with long running series; cruft builds up around the core gameplay and the fun little asides start to overwhelm the actual game. It often starts to appear in third entries, even good ones. Look at Sonic the Hedgehog 3 (And Knuckles). The game adds a lot of complementary ideas and extra playable characters. I choose that game as the example specifically because it shares something with both Crash 3 and Spyro 3; it is an excellent game. The accumulation of unnecessary stuff is there, but it has yet to really hamper the game. With Crash it is evident in all the vehicle levels. There are motorcycle races, jet skis obstacle courses, and bi-plane dogfights. They are not the game you came in expecting, but only the motorcycle stages are bad. In Spyro 3 it manifests itself as extra playable characters. Lots of sections of stages are there for Spyro’s new, and largely annoying for one reason or another, friends. There are some frustrating parts, but they are largely fine. 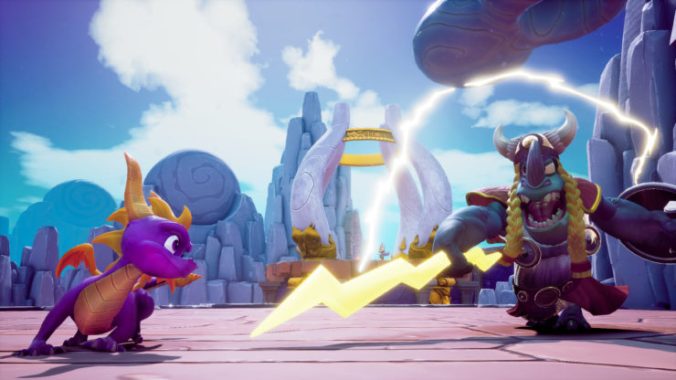 Both of these third entries show series treading water. They know they’ve hit on something successful and they do not seem interested in evolving that idea, instead the games merely iterate. The extra stuff is here to try to show growth without actually risking messing up a good thing by attempting to grow. The third Crash has softened me on that trilogy, and I genuinely enjoyed Spyro 3 almost as much as the first. Still, I am ready to be done with these series for a while.