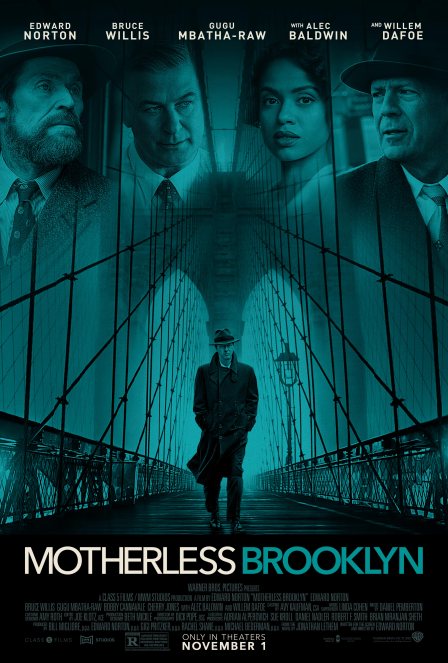 There is something delightfully old-fashioned, for good or ill, about Motherless Brooklyn. I know the movie made significant changes from the source material. I am not quite sure about its portrayal of tourette’s syndrome. But I loved that Motherless Brooklyn is just an old-fashioned noir. It isn’t simple or without bigger themes, but it seems more than happy to just execute a solid formula that hasn’t gotten much use lately.

Lionel Essrog is a private detective working for his father figure Frank Minna. When a mysterious job goes south and Minna ends up shot, Lionel takes it upon himself to solve the mystery of why Frank was killed. As these things tend to go, what at first seems like a fairly simple mystery soon spirals into something much, much bigger. Lionel is a skilled detective, smart and observant. He also suffers from tourette’s and possibly some other neurodevelopmental issues. He works with Minna at his combination private investigation and car service, along with a trio of other orphans that Frank took under his wing. At first, they seem just as eager as Lionel to find Frank’s killers, but things get complicated.

The movie just jumps eagerly into noir tropes. After Lionel literally takes Frank’s place, wearing his hat and coat as he starts backtracking through the investigation that led to Frank being shot. He ends up at a jazz club and finds out that Frank was looking into something that leads to city hall. He meets a crazed seeming man at a community event, who gives him some insight on Moses Randolf, the unelected powerful man who secretly runs the city. Eventually, he discovers the secret that Frank had uncovered that he was going to use to blackmail some powerful people.

That is where the other thread of this movie comes in, bringing in the real history of New York’s policy of discrimination under the guise of urban planning. Lionel’s investigation brings him in contact with African American communities that are labeled as slums and cleared more for the profit of Randolf’s cronies than for helping to reform the city.

Motherless Brooklyn isn’t really showing the audience anything that hasn’t been done before. Chinatown comes to mind. It is a noir detective story, eventually the hero finds out that the system is designed more to enable the bad behavior of the people in charge than to rein them in. Still, the movie shines by being well acted and genuinely thrilling. Edward Norton is great as always and the movie is absolutely populated with recognizable faces. Bruce Willis seems more engaged than he has in years for his brief appearance as Minna. Gugu Mbatha-Raw is excellent as a young lawyer fighting against this gentrification who is more entwined in this that it first appears. The performance that will be most polarizing is Alec Baldwin as Moses Randolf. He channels more than a little of SNL impression of loathsome garbage, but it works for a character that is truly gross and somehow untouchable despite everyone seeing how gross he is.

One thought on “Motherless Brooklyn”