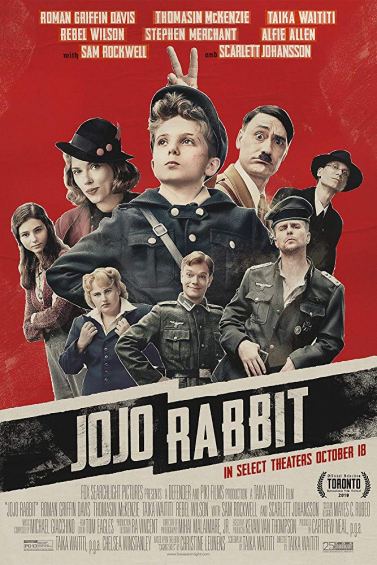 Taika Waititi’s reputation as a director is already strongly established. He has made one of the absolute best comedies of the last decade in What We Do in the Shadows. He made one of the best MCU movies in Thor: Ragnarok. He also made the underrated, or maybe just underseen, Hunter for the Wilderpeople. His latest movie, Jojo Rabbit, is referred to as an anti-hate satire. It is set in Nazi Germany, with Waititi playing the role of Hitler. Or at least a little boy’s imagined version of Hitler. It is quite a swing, but is any one has earned the right to take a swing, it is Waititi. Luckily, it mostly works out.

Jojo Rabbit star Roman Griffin Davis as Jojo, a ten year old boy living in Nazi Germany. He is an avowed and enthusiastic Nazi. He also doesn’t seem to have too many friends; his best friend is his imaginary friend, Adolf Hitler. At the start of the movie, he attends a Nazi Youth Camp, where he is taunted about his absent, possibly deserter father. In an attempt to prove his courage, Jojo is involved in an accident that leaves him partially crippled. Stuck at home and with doing menial tasks for the local Nazi party, Jojo is lonely.

Soon, he learns that his mother has hidden a young Jewish girl in the walls of their home. This revelation starts Jojo on a path of examining the lies and hatred that he has bought into so thoroughly in an attempt to find a place to belong.

While billed as a satire, Jojo Rabbit is more of a farce. It portrays the Nazis cartoonishly, both in their evil and in their stupidity. There are a lot of strong comic performances portraying these Nazis, from Waititi’s petulant, forgetful, imaginary Hitler, to Rebel Wilson as the comical extreme of “for the fatherland and femininity.” Stephen Merchant shows up as an unctuously smiling SS officer who is both comical and scary. The biggest presence is Sam Rockwell as the one-eye, frustrated and flamboyant officer in charge of town. He looks after Jojo while Jojo’s mother works and seems increasingly disillusioned with the Nazi regime.

Jojo’s interactions with the Nazis is played as humorous, his home life is more of a drama. He lives alone with his mother, played by Scarlet Johansson. She is clearly hurting at her son’s full throated adoption of Nazi thought. Something she doesn’t share, as she hides a young Jewish girl in their house. Still, she tries to gently lead Jojo away from the destructive ideology he has bought into. Jojo soon meets the girl, Elsa, played by Thomasin McKenzie. At first he is indignant, then scared. Soon, he starts to build a relationship with her. As he interrogates her, attempting to get information about Jews for the Nazis, he comes to really care for her. He starts to drift away from the Nazis. Waititi’s Hitler starts to recede from the movie.

Jojo Rabbit attempts a delicate balancing act, dealing with some serious thoughtful issues while also telling jokes. It isn’t the first movie to do that with this same issue, To Be or Not To Be starring Mel Brooks comes to mind. Jojo Rabbit mostly manages successfully. It doesn’t quite pack the dramatic punch it could and depending on how funny you find kids shouting heil Hitler, it doesn’t quite knock the humor out of the park either. Still, it is charming and heartwarming movie that entertains for its entire runtime.