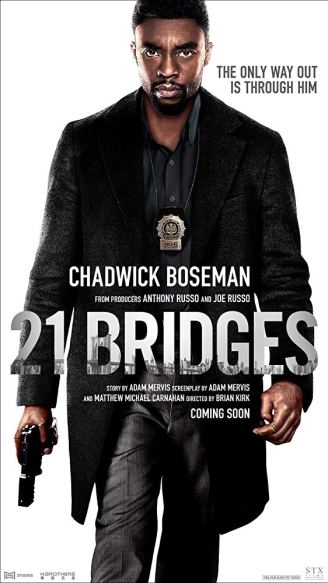 I’m of two minds about 21 Bridges. On the one hand, it is a well executed crime thriller; on the other it embodies some downright gross policies. Just as a pure exercise in genre, it is a lot of fun. However, the movie’s take on killer cops is troubling, at best.

Chadwick Boseman plays Andre Davis, whose father was a cop who was killed while working and is now a cop himself. A cop with a reputation for shooting suspects. He claims they were all in self-defense and the movie does nothing to question that. At the start of the movie, two small time crooks attempt to steal a small amount of cocaine they have been told was being held at a restaurant. Once there they find ten times the amount of cocaine they expected. In the midst of the heist, they also find nearly a dozen cops descending on the restaurant. The crooks, Michael (Stephan James) and Ray (Taylor Kitsch) shoot their way out, killing more than a half dozen cops. In the aftermath, Andre is called in. Realizing how close they are on the trail of the crooks, he requests to have all 21 bridges connecting Manhattan to the mainland to be shut down so they can find them before they escape. Andre is joined by narcotics officer Burns (Sienna Miller) as they attempt to track down the unknown killers. Andre is pressured to shoot first and ask questions later, but he seems uncomfortable with that.

The movie is surprisingly sympathetic to the crooks. Maybe it was just me, but I found myself rooting for them as the movie went on. For all they are murders, it paints them fairly sympathetically. They are both ex-soldiers; just poor guys who are putting the skills they have to good use. Ray is more than willing to shoot his way out of any situation, but Michael is more thoughtful. He is the first to twig that something isn’t quite right with what is going on. When he is finally cornered by Andre about halfway through the movie, he tries to convince him something more is going on. Andre is already on the same page at that point, noticing how his fellow officers are shooting first, asking questions never and acting without his approval even though he is supposedly in charge of the investigation.

The movie really works in some tense shoot out scenes. The opening slaughter shows the cold efficiency of Ray, who quickly realizes they will not make it out without shooting. That continues to a shootout in a fortified penthouse, and another in a mostly abandoned butcher shop. There is also a solid on foot chase scene. I feel like I say this a lot, but it’s not John Wick but it is still pretty well done.

My biggest problem with this movie is how it just tacitly accepts that the police need to kill people. It sets up a dichotomy between good killer cops and bad killer cops, with the cops in this movie killing suspects as a matter of course. The movie posits these extra-judicial killings as an unfortunate necessity, even as nearly every cop in the movie is revealed to be at least somewhat dirty. The fact that the circumstances here do not represent anything like real-life are kind of moot. When J.K. Simmons’s Captain McKenna tells Andre to kill the shooters because he doesn’t want to put the families through the “trauma” of a trial, the movie treats this as an at least somewhat reasonable request. It is a disgusting request.

My problems with politics it espouses aside, 21 Bridges is a solid action thriller. If it felt more mindless it would be better, instead it manages to feign thoughtfulness, as though it means what is says, which is pretty gross. Boseman, however, remains an excellent presence to center a movie on.

One thought on “21 Bridges Review”