“I’m not a big fact person; unproved speculation is more my thing.” 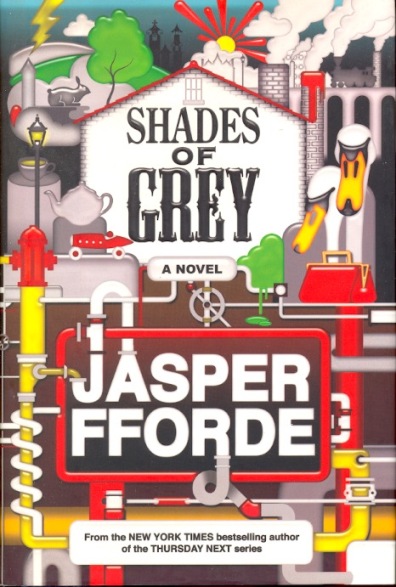 I fell in love with Jasper Fforde’s writing pretty much as soon as I encountered it. That first encounter was by way of a review of one of the later Thursday Next books, I am pretty sure it was One of Our Thursdays is Missing, in the paper. I cannot remember the specifics of what it said, all I knew was that it sounded like it was just for me. So I tracked down a copy of The Eyre Affair and that was pretty much it. While I have not encountered a Fforde novel that I did not like, one clearly stood above the others in my esteem. That is Shades of Grey, a post-apocalyptic science fiction coming of age story that is unlike anything else I have ever read.

It is hard to explain exactly what Shades of Grey is. The genres I listed above are accurate, but they do not really get what the book is across. While it is set in the future after some great disaster, the book largely is not about that. Every other story I can think of with a similar set up would be all about how the world went wrong. It would be dropping hints about how things came to be the way they are, and the protagonist would pretty quickly get wrapped up in a quest to unravel this unfamiliar world’s mysteries. Shades of Grey kind of does that stuff, but it mostly puts it to the side for the first two thirds of the book. Instead, it is a comedy of manners, more akin to something by Jane Austen than another post-apocalyptic science fiction story. That comedy of manners framing works, because explaining the minutia of the color-based society that Eddie Russet lives in creates an effective way to do a lot of world building. The framing also works to establish who and what the characters are. By digging into the doublespeak-esque Munsell’s Rules that govern this world and character obey or appear to obey while flouting the rules does a lot to inform the reader about who they are. The prefects, like the vile Gamboges and the grasping de Mauves, use the rules as clubs to hold over the heads of those they believe lesser than themselves. Meanwhile, Eddie’s dad uses the Rules as a shield to protect the vulnerable.

The start of Shade of Grey gives Eddie a problem. He was set to marry a woman higher up on the chromatic scale than he is. (More on that in a paragraph or so) But thanks to an ill-timed prank, he is sent with his father to the outer fringes, a backwater far from the society he’s known. His father has an important job, taking over as essentially this world’s version of a doctor for a friend who died suddenly. Eddie is given busy work, doing a chair census. After a few chapters, Eddie arrives in East Carmine and has to navigate a whole new social climate. His goal is to finish his work and get back to his would be paramour; to do that he has to navigate the social dynamics of this new town.

This allows Fforde to really dig into how the Chromatacia works. People in Shades of Grey fit into society based on which colors they can see and how well they can see those colors. Those who do not see any color well enough are Greys, who do the back-breaking menial labor. Following the chromatic scale, ROY G BIV and all that, people are ranked. Eddie Russet is a red, lowest on the scale other than Greys. It goes all the way up to Purples, who are the highest rank. Different colors get different jobs. Yellows, for example, are generally in charge of managing the Greys. There are all kinds of social rules that are carefully explained, like how complementary colors do not mix.

Eddie is essentially a very attractive man coming on to the marriage market. While he hasn’t had the test that will tell him how much color he can see, he knows he will rank very high. That makes him a viable commodity for families with compatible colors, like rich old red families whose colors are fading or purple families who are leaning too far too blue. Eddie, as a true believer in this color-based society, is trying his best to move up within the scale of red, marrying into an old money red family. But once his abilities are known in East Carmine, he becomes the target of the much too blue purple family, the de Mauves.

All of this is beside the point of the mystery going on behind the scenes. That mystery is threaded in early on; with a Grey masquerading as a different color, a pretty young grey woman that Eddie runs into in places she shouldn’t be, and the mysterious death of the previous doctor-like swatchman that prompted Eddie’s father’s move. In some ways it resembles the current trend of the hyper-competent woman teamed up with the bumbling hero. Except Eddie isn’t really bumbling. He starts ignorant, true, and he can be a little passive when he comes up against authority, but Eddie is largely smart, inquisitive, and capable.

At about the two thirds mark of the book, the balance shifts, with the post-apocalyptic stuff beginning to outweigh the comedy of manners stuff. Eddie starts to learn exactly how much of what he knows about the world is a lie. I do not think it is a spoiler to say that this color-based society is largely built on lies. Neither Eddie nor the reader is quite ready for how horrible the truth is once Eddie ends up in the abandoned city of High Saffron.

The whole thing works perfectly for me. The first part of the book is a constant delight, exploring an absurd world with some definite darkness hidden behind it. Still, it largely feels more playful than dangerous. Then it starts to become dangerous, while remaining pretty playful. The big turning point is a field hockey match that gets out of hand. By that point, Eddie knows strange things are afoot, but he is still set on getting out of town as fast as possible. Soon, that becomes impossible. So Eddie takes another path.

The big revelation is that the people who are sent to the Emerald City for reeducation are actually sent to High Saffron and essentially euthanized. After that revelation, the book ends with a series of successive gut punches. By the time secrets are revealed, Eddie and his grey counterpart Jane have developed a solid romance. Then that is derailed. At least Eddie has managed to create a happy ending for his friend Dorian and Dorian’s love Imogen. Theirs is a forbidden romance; she is a purple, he is a grey. But they fell in love and Eddie helps facilitate their elopement.  However, the representative of National Color, the organization that keeps society in order, redirects their train, sending them on the night train to the Emerald City. It is a ploy to see if Eddie knows the secret of the Emerald City. The naive Eddie of the start of the book would have immediately stepped in to help his friends, would have trusted that National Color was doing the best they could. Instead, he has to stand there and smile as his friends are sent to their deaths, because if he spoke up he would be joining them. That heart rending ending really whets the appetite for how Eddie and Jane will work to undermine the Chromatacia. Too bad there is not yet a sequel.

One thought on “Shades of Grey: The Road to High Saffron”