My rocky relationship with the Tales series continues with playing Tales of Vesperia. I believe I’ve written before about my experience with this series. Tales of Symphonia hit at just the right time for me, with its relatively bright tone contrasting with the PS1 rpgs I had been playing before that. I haven’t revisited it in the fifteen years or so since, but I have very fond memories of it. I had those same memories in the late 00’s when I tracked down copies of Tales of Legendia and Tales of the Abyss. Tales of Legendia is pokey and awkward, but honestly I found it largely charming. Tales of the Abyss, as I have previously explained, just rubbed me the wrong way. It may have been an improvement over Tales of Symphonia as far as systems go, but the plot and characters made me angry in ways that almost no other game has. Tales of the Abyss left such a bad taste in my mouth that I largely wrote off the series since then. I picked up a couple of games for the PS3 when they were dirt cheap, but I never really felt the desire to play them. A few hours of Tales of Graces f was all I played before deciding it just wasn’t doing it for me and putting it away. However, when I got my Switch, Tales of Vesperia just so happened to be on sale, so I thought I’d dip my toe in this series once again.

Tales of Vesperia mostly works, but everything good I have to say about it will be followed by something negative. Those negatives are easy to ignore in the early going, but by the time you invest fifty plus hours into this game they start to loom larger and larger. To start with one that is all on me, it appears that there is a lot of depth and strategy to the battle system. While I beat the game, I honestly can’t say the more intricate parts of the battle system ever really clicked for me. I mean, I generally understood it, but the harder I tried to work combos or use the overlimit system, the more I got destroyed. So I stuck with pretty basic combos and mixes of arts. It mostly worked. I am sure that people who took the time to learn the ins and outs of burst arts and the over limit gauge could do amazing things, but I had neither much aptitude for nor interest in learning how it worked. So getting annoyed at 50 hours of tame combos is largely on me. I admit that and I don’t really hold it against the game. However, I do not think the game does a good job of teaching the player how its systems work. The game just kind of throws all of its mechanics out there and leaves it to the player to figure them out. It might be better than weighing the game down with tutorials, but some more explanation would have been appreciated.

I do really like the characters in this game; the player’s party, which contains about eighty percent of the worthwhile or interesting characters in the game, is truly excellent. They fit pretty neatly into well worn tropes, at least to start, but the game does good and interesting things with them. For the most part. JRPGs, especially Tales games I’ve played, frequently seem to be working with a finite number of character traits that are shuffled and distributed at random amongst the cast. I am not sure Tales of Vesperia gets away from that, but with one glaring exception, the characters all feel well realized. The big exception is Patty, who is fine. She has a convoluted backstory and it is clear that she is a late addition to the rest of the cast. I think protagonist Yuri does the edgy badass thing better than any other character has done it, largely because of the parts of that character archetype he avoids. At first blush he’s not unlike so many other rebellious leads. There are shades of Squall from FF8, Ryudo from Grandia 2, and Yuri from Shadow Hearts in Yuri’s character, but he is much softer than any of them. He genuinely seems to want to connect with his fellow party members. He is not eager to deal with inanities, but there is a version of his character that is much harsher than the one in the game. It makes it that much more impactful when he actually does dark and edgy things.

The negative that pairs with my love of the characters is that the game’s plot is garbage. The game refuses to build any story momentum or execute any sort of rising action. It is split into three distinct arcs, each one ending like some slowly letting the air out of a balloon. It keeps the player in the dark as to what is going on and what actually matters for way too long, then concludes in a hurry. It is just a badly told story.

I think part of that comes from this being a relatively early HD release, and the game tries its best to mask how small its world actually is. It looks nice. But there are like 3 consequential towns and the game keeps the player running back and forth between them, while occasionally going to new dungeons. The player will have seen about two thirds of the world by the twenty hour mark and the rest of the game just feels like padding things out with reused assets. I don’t mean to be too harsh, as I said the game mostly works. It is just a game that really seems to wear out its welcome by the time it ends. It is a great 35-40 hour game that unfortunately takes about 50 hours to beat. 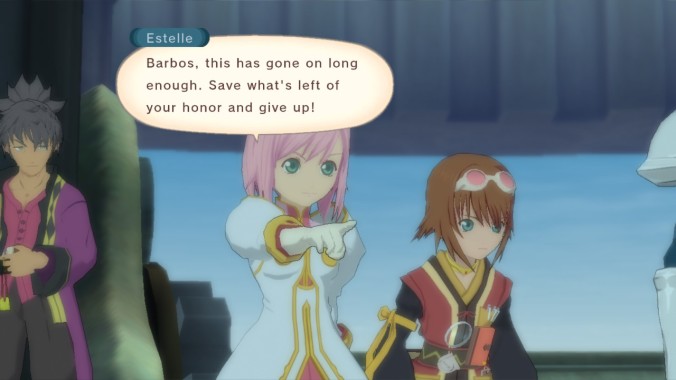 The most foolish thing is, despite me not having genuinely liked a Tales of game since my first experience with Tales of Symphonia back on the GameCube, I made a detailed plan to do a tour of the series. It didn’t cost much. I already owned most of the games. I picked up Tales of Berseria and Tales of Zestiria for a combined total of about twenty dollars. That left only Tales of Xillia 2 and Tales of Hearts as the US released Tales of games to which I did not have access. But the last ten hours I spent with Tales of Vesperia kind of killed my desire to do that. I still might do it. Right now I am split by several competing interests. The first is that I also planned out a Final Fantasy series replay and that sounds a lot more fun to me. Also, I’ve got a couple more Yakuza games to replay. Finally, I am torn on revisiting Tales of Symphonia. On the one hand, I want to see how the game holds up fifteen years after I first played it; on the other, none of the other games in the series have grabbed me like it did and I’m afraid to have my memories tarnished.