I beat this game the first time while doing this blog, and I looked back to see what I wrote about it a few years ago. It turns out, I only wrote about it in my monthly catch-up post and while I liked it, I didn’t have much to say about it. I have that same problem after beating it again. 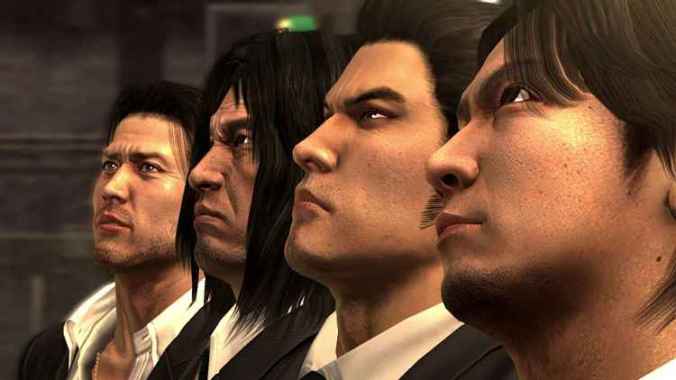 Most of what I am going to say is going to be about the narrative and structure of Yakuza 4. As far as gameplay goes, it is a modest evolution from the previous game. The combat expands by having 4 playable characters who all have distinct fighting styles. It makes some difference, but the core of how the system works doesn’t change. There are a myriad of quality of life improvements; the game just plays smoother than the previous one. It looks better. But those are all just incremental improvements. It looks and plays better than any Yakuza game that came before it, but outside of the playable characters, there are no fundamental changes.

The story is the game’s biggest swing, and while it is compelling while it plays out, the game does not manage to bring things home. Yakuza 3 ended on an ambiguous note, series hero Kazuma Kiryu, stabbed in the gut, lay bleeding out on the streets of Kamurocho. Yakuza 4 does not pick up on that, but instead widens the scope on what until this point had been the Legend of Kiryu. It picks up in the familiar confines of Kamurocho, with the player controlling louche loan shark Shun Akiyama. The game then progresses to taciturn, regretful hitman Taiga Saejima and then to committed and benignly corrupt cop Masayoshi Tanimura. Finally, the game concludes with a handful of chapters for Kiryu.

The Kiryu chapters at the end feel a little like the game chickening out. It seems to want to move on from Kiryu, but can’t quite bring itself to do so. It decenters him in the narrative, but then uses him as the anchor in this protagonist relay. It is the wrong choice. Kiryu is the character the player, assuming the player is a veteran of the series, has the greatest connection with. However, he is the character that has the least connection to the plot. He doesn’t really have a reason to be there. It almost feels like the development team wanted to replace him completely, but then did not have the courage to do so, leading to his late game appearance and prominence. His appearance is the right choice, though. As much as I want, from a story perspective, for Kiryu to be allowed to walk away to his happy ending, I also really like playing as him.

The other protagonists feel like they are auditioning to take over the position full time. Looked at that way, there are two viable candidates. The one that doesn’t quite make the grade is Tanimura. That is a bit harsh, but it is hard to imagine more stories with him after Yakuza 4. His story is the one most tied to one aspect of the plot. He is on the lookout for the man who killed his father. His story is tied to corruption within the Tokyo police. That story comes to the fore with Tanimura’s part of the story and is a big part of the machinations that drive the plot of this game, but it is resolved at the end. Unless they were looking to change the direction of the series entirely, he is not really a viable choice going forward. Plus, he is not the most interesting new character. There just doesn’t seem to be a lot there.

Akiyama and Saejima, meanwhile, seem to split aspects of Kiryu into new characters and fill in the rest with different answers. Saejima is the tortured Yakuza legend. Like Kiryu he was in prison for murder. Unlike Kiryu, he actually did it. He did it because he bought in fully to the Yakuza ideal. He did it for his Patriarch. Unlike Kiryu, Saejima wants to get back into the Tojo Clan. He is quiet and brooding, just a big scary mountain of a man. He feels credible in the role as Yakuza heavy in a way that Kiryu always seemed too genuinely good to be. But that also makes him less compelling than Kiryu. He actively wants the criminal life; he is not seeking to break free of it. Also, there is a scene that suggests a close attempt at a sexual assault against Haruka that really does not endear the player to Saejima. Akiyama, on the other hand, is the Kiryu that gets embroiled in weirdo nonsense. He is also the outsider that, for some reason, has the respect of some Yakuza family. Unlike Kiryu, Akiyama faces the weirdness, especially when it gets smutty, with more than a little enthusiasm. Kiryu is this blank slate that takes all the strangeness in stride, Akiyama actively leans into it. He is also just genuinely charming, with a roguish air. Honestly, if one of these three were to be the new protagonist, I would have voted for Akiyama.

The story starts strong. Akiyama meets with Lily, a woman who wants to borrow an obscene amount of money for an unknown reason. He tests her before agreeing to loan the money. Simultaneously, he gets embroiled with some strange goings on with Kanemura Enterprises, a local small time Yakuza family. When his friend Arai apparently kills a member of a rival family, things get serious. Akiyama falls in love with Lily, but he also learns of a few more murders. The story then switches to Saejima, and it is revealed that Lily is actually his sister. In order to find out what went wrong that landed him in prison 25 years ago, which is somehow connected to Akiyama’s story. As Saejima starts to get his answers, it switches to Tanimura, who is looking for the man who betrayed and murdered his father, 25 years ago. It is all connected. Then finally, it moves to Kiryu, who is now with Lily and has found a connection to the pile of cash the Tojo Clan had on hand in Yakuza 1.

The game builds an intricate web of deceptions and double crosses, with interesting characters and slowly unfolding mysteries. Then it gets to the end, and there is no ending. The finale is four consecutive boss battles, one for each playable character, that make varying levels of sense. But there is no final reveal that really ties it all together, and since you spend the last section playing as Kiryu, all the final revelations that exist happen to a largely unconcerned interloper. It is a lot of fun while playing through it, but the ending is just deflating. It mostly feels like the developers watched Infernal Affairs, or The Departed, and tried to replicate that in a video game, only to completely lose track of their plot and just have the player fight everybody at the end.

Yakuza games are generally games more for moments than overall coherence, but the ending here just misses completely, making the ways it doesn’t fit stand out more than a game that builds to something satisfying.

This is still not my favorite Yakuza game, but I am glad that the one that holds the place in my memory is up next. Hopefully I can get it done before Like A Dragon hits. Maybe I’ll track down the Miike movie as well.