After beating Sin & Punishment — on easy, if you must know — I started up several Wii games to see what would grab me. After trying out Epic Mickey, Muramasa and Cursed Mountain, all games I plan to return to, I finally decided to stick with Lost in Shadow.

Lost in Shadow is a 2D platformer from Hudson. It is hard not to compare it to the likes of Ico, if only due to the aural and visual similarities, but they have wholly different gameplay goals. It tries very, very hard to capture the ethereal moodiness of Ico and it succeeds fairly well. It is certainly more “gamey” than Ico is, being split into levels and tracking experience points, but what is loses in cohesion it makes up for in mechanics. Ico is a singular experience that eschews many video game conventions, like HUDs and separated levels. It is in many ways a more direct adventure game. Lost in Shadow takes the look and feel of Ico, but marries it to a more traditional video game set up. It actually plays very much like a 16-bit action/platformer. Which is absolutely a good thing.

You play as a shadow separated from its body, a la Peter Pan, and must traverse a castle to reunite with it. Being a shadow, your avatar can only travel along other shadows. So you must manipulate objects in the physical foreground to make paths in the shadowy background. It makes for some ingenious fun. The levels tend, at least in the early going, to be short, but they all have a satisfying puzzle at their heart.

One gameplay area Lost in Shadow does seem to take its cues from Ico is in the combat. Though how fun it was is debatable, when you fought in Ico it got across the feeling of being a small boy fighting with a stick. The shadow also swings his sword with little skill. It is hard to judge and ungainly, but perfectly responsive. The combat is slow and nowhere near as interesting as the puzzles are. Hopefully it stays a secondary concern ans doesn’t overwhelm the good parts of the game.

I am only about 35% through Lost in Shadow, and I have enjoyed it thoroughly so far. There is still plenty of time for it to screw up, but as long as it doesn’t go meat circus* stupid it should still be a pretty good game. 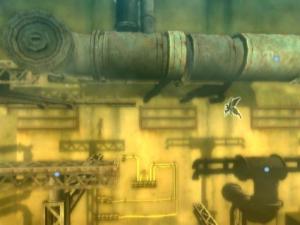 *The Meat Circus is the final stage in the seminal Psychonauts and is damn near unplayable. It is both stupidly hard and seemingly designed for a moveset the player doesn’t have. It nearly ruins one of the best games of the PS2 generation.