A new Kirby game has been released and it has become my life. Fortunately, Kirby games are often short affairs, so it is dominion over my free time is sure to be short lived. (note: in the time between typing and posting this, I beat the game.) Kirby Mass Attack is a fitting last Nintendo game for the DS, as it seems like it may be. (I know that Nintendo is publishing Professor Layton 4 next month, but that is a Level 5 game, not a Nintendo one.) It is a platformer that combines the best of SNES era 2D gameplay with controls that are only possible with the DS’s touch screen. Mass Attack is the epitome of what the DS has offered over the last half-decade or so.

The best DS games, the one that aren’t ports or remakes, combine traditional types of gameplay with inventive use of some or all of the DS’s unique functionality. There are gems like Trauma Center, The World Ends with You and Kirby Canvas Curse. Canvas Curse is a great comparison for Mass Attack; they are both nontraditional Kirby games and they are possibly both the first and last great games for the system. While Canvas Curse was the game that announced the arrival of the DS as a full-fledged system and not a gimmicky blip next to the gameboy, Mass Attack is the culmination of five plus years of capitalizing on the potential Canvas Curse revealed.

Not that all uses of the touch screen or the second screen or anything else were good, but even some bad games had at least uniqueness to offer. There were disasters like Lunar Dragon Song but more often, there were interesting failures, like the various attempts to force a RTS on to the system. From Lost Magic (I’ve never played that one) to Heroes of Mana to Final Fantasy XII Revenant Wings, it was tried many times, but never was it wholly successful, though Revenant Wings came close. Mass Attack also attempts to be something of an RTS, but it succeeds by adapting that sort of gameplay to a style of game more suited to the DS: a platformer.

At its heart, Kirby Mass Attack is not too different from Kirby Super Star, right down to the different mini-games. However, the RTS touches add an interesting wrinkle. Many DS games have tried full touch screen controls and as well as they have worked some times — the Zelda games for example — there is an inherent loss of precision. This can be a killer in the intense portions of most action games. Mass Attack’s RTS elements help alleviate that by giving the player direct control of 10 characters rather than one. The lack of precision is made up for by the mass of avatars the player controls. Best of all, the stages are designed with the strengths and weaknesses of the controls and screen size in mind. There are fewer precise jumps, because that is hard to do with no jump button, but more flat line hazards, which are still difficult and less frustrating. 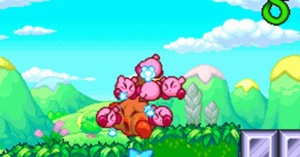 Mass Attack looks and feels like an SNES game, but controls and plays much differently. It manages to be deliciously old school and entirely fresh and innovative at the same time. It is a Kirby game, despite how much it deviates from the norm (which is more and more becoming the norm for Kirby), so it is fairly short and mostly easy. I beat it in less than a week, though my completion percentage is only 74%. Putting this game over the top from very good to great is the slew of outstanding mini games unlocked by finding medals in the stages. There is pinball game, and a fake RPG and a wholly enjoyable shooter and several more I haven’t yet played. This game really seems to be a labor of love, as the best games are. The days of the DS are waning quickly, and titles like Mass Attack are helping the best video game system of the millennium (so far) go out with a bang.