I included this game, DoReMi Fantasy: Milon no DokiDoki Daibouken (Milon’s Heart-Pounding Adventure) because I mysteriously appeared on Virtual Console in the middle of the Wii’s life. It wasn’t the earliest import title on the service, but it came fairly early in that initiative and seemed like an odd choice. There were definitely more high profile releases that never made the trip to America, like Secret of Mana’s sequel Seiken Densetsu 3, or games that already had an English translation, like Terranigma. Instead we go this little known sequel to a not particularly good or well-remembered NES game. It was a little intriguing and a little baffling, especially given that the limited coverage of it was fairly positive. Playing it for the first time a few weeks ago I was shocked. DoReMi Fantasy is not just a solid little platformer, it is one of the best platform games on the SNES.

DoReMi Fantasy is the story of a little boy, Milon, whose fairy friend Alis has been kidnapped by the evil wizard Amon. So he sets off on an adventure to rescue her and restore music to his forest home. Milon has to find the five magical instruments and find the magic stars to restore their powers. While Milon himself looks like a cutesy Link from Legend of Zelda, the game is much more in the Mario mold. The game is primarily a run and jump adventure, with Milon eventually getting a small number of other abilities as he goes along, most notably he can make a magical set of stairs out of musical notes. Otherwise, it is largely the same as Mario or Donkey Kong. Milon doesn’t kill enemies by jumping on them, which merely stuns them. Instead he must catch them in a bubble that he blows with what appears to be a straw.

It starts out fairly easy but by the end the difficulty has ramped up to something approaching hard, though it never gets particularly difficult. It begins at a Kirby level, but ends near late Mario game difficulty. Milon can take 3 hits before dying and life restoring items are plentiful. The level design ranges from devious to delightful, never unfair but sometimes a little frustrating with well-placed enemies.  None of them are particularly hard, but few are cakewalks. 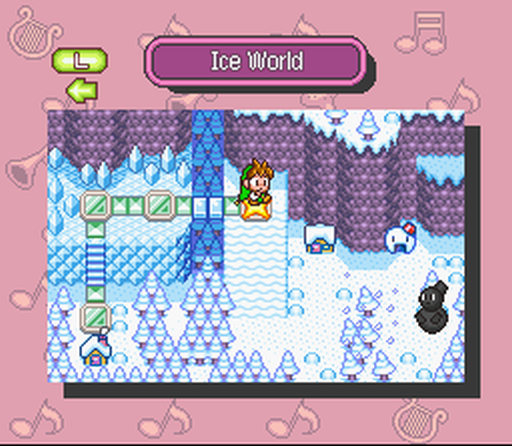 Really, the game just does everything right. The graphics are bright and clear, with expressive, colorful sprites and some well-designed worlds to go along with standards like forest, ice and lava worlds. The controls are pitch perfect and the music is more environmental than most SNES games but it works really well. It is also just damn charming. The cutscenes are goofy fun. One has Milon choosing between Bombermen to help him get past an obstacle, one of which blows Milon up. One boss isn’t an ally of the enemy, merely a rapscallion blocking the way. It all makes for a game that is just a joy to play.

While the game breaks no new ground, it does everything it wants with precision. It doesn’t quite stand up to Super Mario World, but I wouldn’t put any other SNES platform game much higher than it. I’ve said it before going through this project, but this is just the sort of game I hoped to find doing this.