Four books in December, with a couple left half read. If you include the comic collections I read I got to my goal of 55 books in 2016. It was a near thing, though. In 2017 I am upping my goal to 60 books, a little over one book a week. I think I can manage it. I’m off to a good start so far. It was an odd smattering of books I read in December. I didn’t intend it to be so, but the month turned into a Wimsey heavy month. I had one book on my Kindle forever and another I found for a buck while doing some Christmas shopping and couldn’t resist picking it up.

Lost in a Good Book

I decided to reread the second book in Fforde’s excellent Thursday Next series. I have read the first one, The Eyre Affair, three or four times, but I haven’t really reread any of the later volumes. I had forgotten how slowly Fforde rolls out his book world. The idea of jumping into books is central to The Eyre Affair, but the rules aren’t really explained in that one. Fforde set himself a difficult task by creating two different alternate realities in this series, with the strange world inside of books being set against the strange world outside of the books. Which is itself the world inside of a book, since these are books. So not only does the reader have to contend with a world where fictional characters live lives outside the confines of the stories we read about them in, but also a world where cloning is advanced and the Crimean War continued for a century. So it makes sense that he was slow to roll out the book stuff, never giving the reader more than was necessary for any given story.

Lost in a Good Book has Fforde painfully destroying the happy ending he built for Thursday in the last book. It doesn’t come off as backtracking, though, but in the story just continuing. She beat Jack Schitt in the first book, but Goliath Corporation is still around and wouldn’t be finished with her. The events of this book build out of those of the last without simply repeating them, like all good sequels do. While this book does tear apart Thursday’s “real” life, it gives her an outlet in BookWorld, where literature lovers get to see famous characters in a different light, though they are still informed by their original stories. I love the Thursday Next books, and will likely reread the rest of the series in the coming year, but I find them hard to recommend. I don’t know many people who have read enough classic literature to get a lot out of these. It is not that works Fforde plays with are obscure – it is mostly Dickens, various Brontes and Shakespeare – but nearly all of them are the stuff people I know were forced to read in high school and never thought of again. 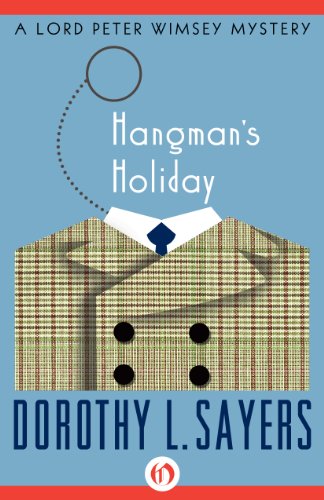 This collection of short stories is billed as a Lord Peter Wimsey book, but most of the book’s takes do not feature him. The bulk of the stories are Montague Egg stories. That doesn’t make them bad; most of these are quite good. Sayers indulges in some macabre plots that maybe wouldn’t work over a full novel. Some are almost just absurdly dark jokes. Still, these are some well executed mysteries. The most memorable are one where a joke goes too far and a terrified man murders the innocent joking tormentor and one where a doctor husband perpetrates unspeakable crimes on his ill wife. Also one that has to do with mass feline murder. Still, if you are reading this volume expecting Peter Wimsey I think you will be somewhat disappointed, since even in his stories he isn’t all that present.

A Presumption of Death

It will seem odd in light of my slight grumbles about the previous book, but I quite liked this Wimsey continuation from Patton Walsh even though Lord Peter himself barely appears in the book. I think this book flows more naturally than Thrones, Dominations, likely because it is all Patton Walsh’s work and not her finishing an unfinished Sayers manuscript. That book, while mostly very good, had an uneven quality to it. This one is more cohesive. It does use Sayers’ Wimsey Papers, a fictional series of wartime letters between the characters of the Wimsey series, at the front and back, but those operate as separate pieces from the rest of the story.

A Presumption of Death has Lord Peter’s wife, Harriet Vane, step into his role as amateur sleuth while he is out of the country doing intelligence work in the early days of WWII. She has relocated from London to their home in the country, taking both her children and those of Lord Peter’s sister. With everyone doing what they can for the war effort, the local police are shorthanded when a woman turns up murdered during an air raid drill. Since it will be easier for another woman to look into some aspects of the victim’s life, Harriet is recruited to aid in the investigation. This leads to her question land girls, city girl moved to the country to help farm, as well as the pilots at a nearby military base.

The only real problem with this mystery is that the mystery itself frequently takes a backseat to the daily struggles of the war effort. The characters spend more time dealing with wartime considerations, including an uncomfortable look at the succession to the Wimsey title, than they do investigating the mystery. That is a problem with expectations, though. That this book is as much about that war effort and its effects on several families as it is about a murder mystery is not a problem with the books, but a problem with the readers’ expectations. I found it engrossing and a fast read, though I wish it could have got to the point with the mystery a little faster. It seems all but solved fairly early, but is disregarded for quite some time as other stories play out first. Still, I enjoyed it. 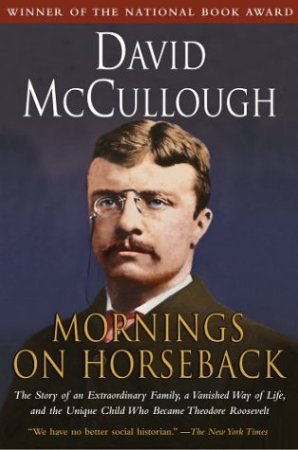 This is partly a look at the early life of Theodore Roosevelt and partly an examination of his family. The eventual president is the central character of the book, but Mornings on Horseback exists to illuminate the home life that young Theodore would have had. How his parents met and came to marry, his father New York royalty and his mother the daughter of southern plantation owners. McCollough does a great job of making the Roosevelt family come alive, so Teedie doesn’t overshadow his other family members. Like the stolid, elder Theodore cuts an imposing, though generous picture as a man who is committed to his family and charity or the eldest child Bamie, whose health problems mad he seem to always strive to be useful to the family.

While their financial fortunes never really wavered, at least not through the portion of their lives this book covers, is does show the ups and downs they faced. All four of the Roosevelt children had some health problems growing up and their parents spared no expense in their care. That also meant that they never attended traditional schools. Or the household tensions during the Civil War, with the children’s Uncles on their Mother’s side being Confederate heroes but their staunchly abolitionist father not serving. Last it gets into Theodore’s days in the West, with him leaving New York after his wife and mother died on the same day. There is a lot to chew on in the relatively slim tome that goes a long way to helping the reader understand the make-up of Theodore Roosevelt and the family he came from.