I love River City Ransom. It is my #2 favorite game of all-time. When I heard that one of those recent Japan-only follow ups was actually going to make it across the pond, I got pretty excited, especially when I saw that it was sticking with the classic NES look. Bad timing, a small print run and my reticence to drop $30 on a digital title led to the game passing me by early this fall. I was more than happy to find it under the tree at Christmas, though. That this game looks and plays so much like that NES classic is reason to be a little leery of my opinion of it. This is a game made to press my nostalgia buttons. 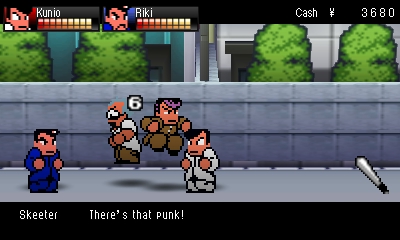 River City Tokyo Rumble manages to be both a follow up to the game Americans actually like, River City Ransom, while not completely ignoring the crappy game that gave the series its start, Renegade. Last year I played through Shin Nekketsu Koho: Kunio-tachi No Banka which was enjoyable in a lot of ways, but was also clearly more of a follow up to Renegade than River City Ransom. River City Tokyo Rumble is very much in the same vein as River City Ransom. There are town areas, shops, RPG-elements and free smiles. While the game plays like a sequel to River City Ransom, the story is very much a sequel to Renegade. It starts with Kunio’s buddy getting beaten up in the parking lot and the characters that join Kunio are ones that were bosses in Renegade but didn’t appear in River City Ransom. While that does keep the game from perfectly hitting the nostalgia like it could have, but it also makes it feel somewhat fresh and new for those that rightly don’t much enjoy Renegade.

There are some changes from the River City Ransom formula and most of them are sideways steps rather than strict improvements. Gone is getting stat increases from food, instead there is an experience system. It works, but it makes the restaurants and shops less important or interesting. They only refill health and willpower. Useful, to be sure, but not as important as improving stats. Players can now accumulate all of the special attack scrolls they can get their hands on without being limited to how many can be equipped. The map opens up slowly, but it is now broken up into freely visit able, once unlocked, areas instead of one big map. Each area is small enough that is hurts the game sense of progression, since the only difference between areas are the enemies in them. It is reminiscent enough of River City Ransom to delight that way, but different enough to not just feel like a cash in.

Some of those differences add quite a bit to the game. Once change is a new system of odd jobs the player can take on. Most of them are pretty mundane, go to a certain place or beat a certain enemy, but it is more than enough incentive to keep the player running around the game’s world. Then there is the gradual accumulation of moves, which far outstrips those available in the NES game. By the end of this game Kunio is an unstoppable death cyclone. It also adds a few difference partner characters, with Shinji and Misuzu in addition to the usual Riki. The new leveling system works against that, though, since they each have to be leveled up with the player and soon fall far behind Kunio.

While it is a far from perfect, River City Tokyo Rumble feels a lot like the Mega Man 9 to River City Ransom’s Mega Man 2. It isn’t as perfect a recreation of the old aesthetic as MM9, it evokes a similar feeling of playing a game just like the games you used to play. The changes to the system, the humorous off beat odd jobs and a story that goes real big by the end makes the game feel even more like a 2D take on the Yakuza series. I’ve always felt River City Ransom and Yakuza shared a lot despite originating nearly 20 years apart and this game doesn’t dissuade me of that notion. And while I am usually not one to complain about price, despite the addition of a dodgeball mode this game feels awful slight for the full $30 price tag. Still, for fans of old school brawlers and River City Ransom in particular, River City Tokyo Rumble is well worth playing.