My big project here this year is going to be a replay of the Super Mario series, mainline games only. That means no spin-offs or sports titles. Like previous projects like 25 Years of NES, the Wheel of Time Reread, Second Quest and 25 Years of SNES, I expect this year long project to take me at least 15 months and become a hateful chore by the end of it. Right now though, I am hoping the ending of this will coincide with the release of Super Mario Odyssey and I can play that game with the character’s history in mind. No promises, though.

So we start with Super Mario Bros. Not the 1985 NES game, though; this time I am playing the Super Mario All-Star version on the Wii through the 25th Anniversary Edition. I decided to play it, and the other NES games, in this format because it gives me something else to say about them. There really isn’t much left to say about Super Mario Bros. I’ve already written about it once.  The All-Stars version gives me at least two things to talk about. One is the newly added save system. I am in favor of saving my progress and not being forced to complete a game in one sitting. Super Mario Bros is not designed with this in mind. In fact, it is designed to facilitate playing through quickly. I am avoiding warping so I can see more of the game than I usually do, but all the different hidden Warp Zones that were built into this game are a thing of beauty. Assuming you know what you are doing you can get to just about any stage in a matter of minutes. Saving robs the game of most of its challenge. You still have to get through without dying, but you can take it one World at a time and methodically take this game apart even if you aren’t any good at it. 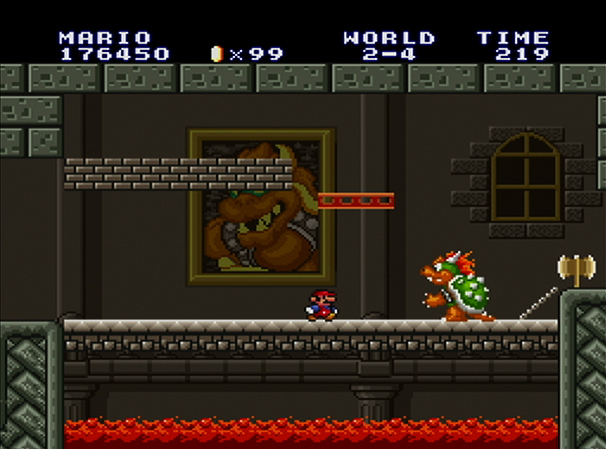 The other thing is interesting thing about the All-Stars version are the new graphics. It makes the characters look like SMB3 characters, but with SMW detail and color depth and fancy backgrounds. The original version of Super Mario Bros looks good in a primitive, familiar way. You’ve seen this game and those sprites for 30 years; that is what they are supposed to look like, the lack of detail notwithstanding. The All-Star graphics take some getting used to, but they actually look really good. It does create some dissonance with a game that looks like a SNES game but definitely plays like an NES game.

As for the game itself, I don’t know what to say about it. I don’t think a game exists that has been more thoroughly discussed and dissected that Super Mario Bros. I’ve already written about it once. It is the ur video game, its primordial essence is a building block for nearly every game that came after it. Honestly, even all these years later it is still a lot of fun to play. It is perfect in its simplicity. Everyone should play it.