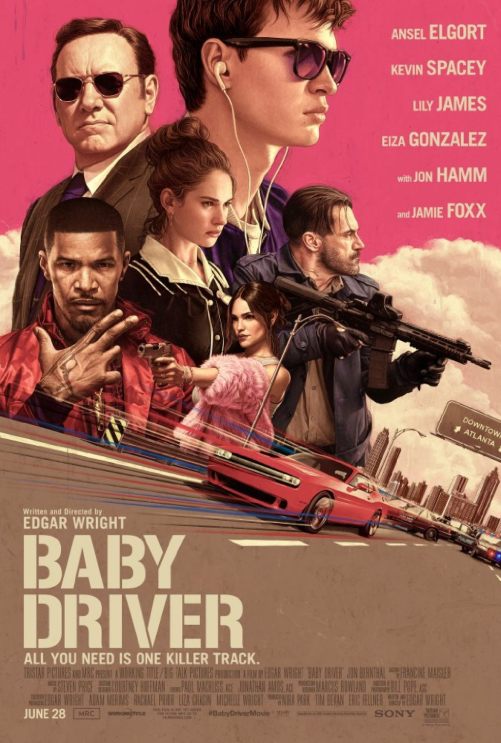 Baby Driver is the best movie I’ve seen this year. It might also be my least favorite Edgar Wright movie, though that is far from fair since at least two of his movies count among my all-time favorites. In what has been a rather dull summer so far, Baby Driver is an unmatched shot of adrenaline. It does everything right and is pure fun from start to finish. And while it never quite breaks out of genre conventions, it still contains a few of the most surprising moments I’ve seen in a movie in years.

Ansel Elgort stars as Baby – B A B Y Baby – a young man who has gotten entangled with some nasty dudes. He owes a debt to Doc, played by Kevin Spacey, who is forcing him to pay it back by being the getaway driver for the heists he masterminds with an ever rotating crew of thieves. Baby is constantly listening to his iPod and all of his driving is synchronized to specific songs. Once he has paid Doc back, Baby intends to go clean. His newly formed relationship with diner waitress Debora makes this an even more enticing proposition, but as tends to happen he is pulled back in for one more job and everything goes to hell.

The various bank robbers that join Doc’s crews are a lot of fun. Jon Hamm plays Buddy, whose friendliness hides barely contained menace. He is married to Eiza Gonzalez’s Darling, who is a little more playfully nuts than Buddy. The stand out other than Hamm is Jamie Foxx as Bats, who doesn’t even pretend to hide the menace like Buddy. He is a danger not just to those who get in his way, but also to his own partners. He is just straight up scary. Baby, meanwhile, is charming and quiet, either so cool nothing fazes him or doing his best to hide how scared he is of the crazy murderers he is forced to work with. The characters aren’t as layered as the ones from the Cornetto Trilogy, but they are still strong.

Wright’s usual perfect editing is on display in this movie, as each of its action set pieces are set to a particular song. It works perfectly, turning Baby Driver into essentially an action musical. The characters don’t sing, but all of their shooting and driving become highly choreographed dance numbers. The best one is likely the one that opens the movie, set to “Bellbottoms” by the Jon Spencer Blues Explosion. It is also filled with clever foreshadowing and call backs, making for a movie that will surely reward repeat viewings.

Baby Driver is an excellent movie. It is tense and buoyant and touching and the perfect antidote to a lot of the stale franchise movies clogged up theaters over the last few months. It is hard to get further into what makes it great without spoiling a turn about midway that was one of the most surprising things I’ve seen on a movie screen this year. I don’t know if Baby Driver is a perfect movie, but it is one that I am eager to revisit as much as possible.