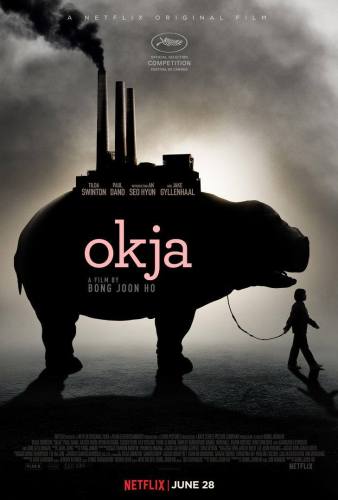 I don’t know that Okja is first great Netflix movie, but it is easily their best offering since they started distributing movies. Much of the furor over this movie is from the reception of it, or really the reception of Netflix, at the Cannes film festival. There is much wailing and gnashing of teeth as to how Netflix is ruining itself by refusing to change its business model to get theatrical releases for its movies. Since I watch a lot more movies on Netflix than I do in theaters and only really wish Netflix would do a better job of letting people know that a new movie is coming. With Okja, though, it is a little disappointing, since this movie feels like one that would have benefited from being seen on the big screen.

Okja is a strange movie.  That is certainly not a bad thing, but it is impossible to ignore. It changes from what feels like a Spielberg movie before morphing into something like a Terry Gilliam movie. It is an odd mixture of tones that almost doesn’t work, and although they never really cohere into one tone, it does make for a uniquely entertaining movie watching experience.

After a prologue that sets up the Mirando Corporation, their insanely peppy CEO and their superpig experiment, it turns into something like E.T. One of the superpig’s that were distributed around the world to see who can raise them best ended up in the Korean mountains. It is named Okja by Mija and her grandfather.  Mija treats Okja like a pet, thinking her Grandfather had saved money to purchase the animal outright. That is disrupted when representatives from Mirando show up, declare Okja the best superpig and whisk it back to America. Mija sets out to get her friend back, teaming up somewhat incidentally with the Animal Liberation Front and eventually confronting the head of the Mirando Corporation.

The Korean stuff feels very Speilbergian.  Ahn Seo-hyun does a great job as Mija, giving a credible performance largely with a CGI monster.  It is much better than a similar performance in last year’s The Jungle Book. That contrasts with the big names, Tilda Swinton and Jake Gyllenhaal, play the faces at Mirando as broad caricatures, a choice that worked for me but seems to be polarizing. They are odd and unlikeable, but the characters are supposed to be unlikeable. It makes the American characters feel like invaders in the movie.  The ALF, whose leader is played by Paul Dano, are somewhere in between, caring more about making points against Mirando than actually helping Mija rescue Okja.

The real triumph of this movie is how real Okja feels.  It isn’t any kind of step forward for special effects, but it is well done. The first act does great work establishing the relationship between Mija and Okja, which carries it through the attempted rescue in Seoul and the trip to America. It doesn’t all work, but the parts that work work incredibly well.

Those familiar with director Bong Joon-Ho’s other movies, like the excellent Snowpiercer, will not be surprised to hear that Okja gets dark. It is a stark look at factory farming. Other than the little girl, no one comes off looking well. It begs the viewer to laugh at at horrible things, because any other choice is too dark.  The movie leaves you somewhat heartbroken even as it suggests that there can be small victories.  Don’t miss it.

One thought on “Okja Review”