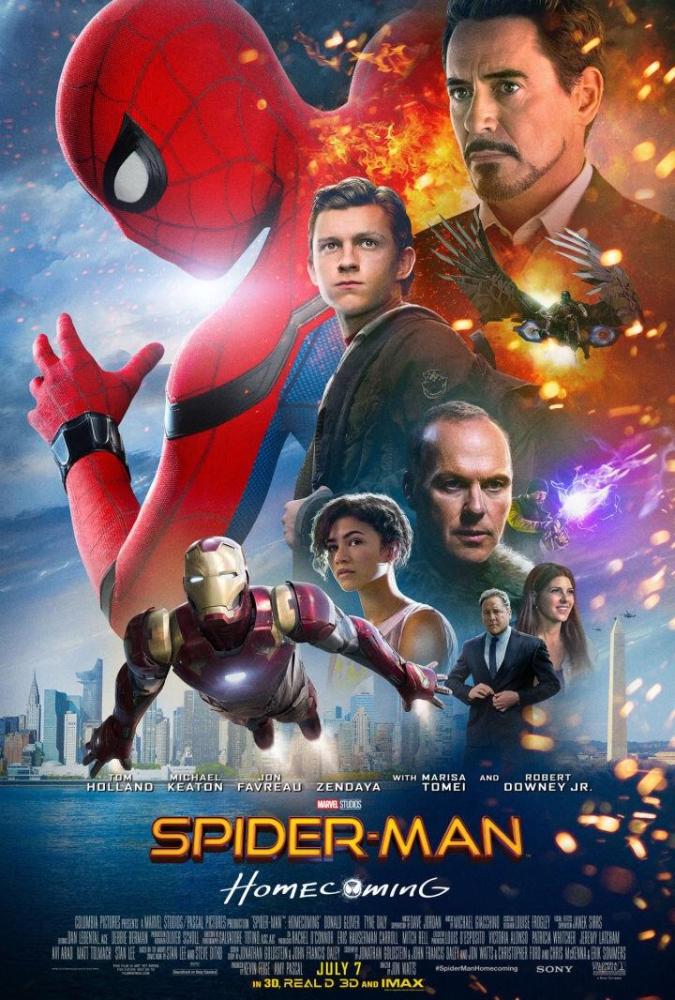 This is going to end up being a fairly negative sounding review. I know that as I start to write it, because while I came out of Spider-Man Homecoming having enjoyed it the more I thought about it as started to write this review the more it seemed to fall apart.  Spider-Man Homecoming is not a bad film.  It has that slickly produced Disney/Marvel sheen, solid performances from its starring trio and a lot of good ideas in its foundation.  The movie also fails to build up to anything or follow through on any of its thematic ideas.

It starts with Michael Keaton’s Adrian Toomes having his clean up job taken by company owned by Stark in the wake of the first Avenger’s movie.  Upset about losing his job to the person who made the mess, Toomes and his employees keep some of the alien salvage they already had and try to figure out how it works. Starting with this is a smart move, doing for an origin story for the villain rather than the hero.  We don’t need to Spider-Man’s origin again.  Unfortunately, after the set up the movie gives the viewer precious little about Toomes, who becomes the Vulture. It makes him rather sympathetic, except when he suddenly decided he’s okay with killing people.

After the opening the film focuses on Peter and his desire, after helping out in Civil War, to join the Avengers.  He uses the supersuit that Iron Man gave him and solves local crimes while being ignored by Iron Man, who has pawned him off on Happy Hogan who also ignores him. I don’t really get the arc they were trying to give Peter in this movie. The lesson, I guess, is that he needs to focus more on living his life than joining the Avengers, but his actions in the movie don’t reflect him ever learning that lesson.  He does the same thing the whole time and other than this movie making him shitty at being a superhero he seems to be trying to do the right thing.  His experiences don’t lead up to any change, though the movie makes one happen at the end anyway.

That is my big problem with the movie.  It starts with some good ideas and ends in places those ideas could have lead, but the movie in between doesn’t actually connect them.  This is in spite of solid performances by Keaton, Robert Downey Jr. and Tom Holland.  It is fun to spend time with these characters, I just wish I could do so in a better movie.  Peter fails as a hero, but suffers no consequence and learns no lessons.  Iron Man, and/trough Happy, tells him stay small and close to home while focusing on his schooling, but the movie doesn’t show him do that.  He bails on his class mates and they aren’t particularly bothered by it.  And the action scene escalate while Spider-Man does a better job handling them.  He succeeds at what he was told not to do and that somehow teaches him not to do it.

The school stuff is fun, but it is also very undercooked.  The videos of the school news team and Captain America PSA’s are the best part of the movie, hands down.  While it sets up some John Hughes like high school drama, the movie never really does anything with it.  It is a good idea that is handled in an unsatisfying way.  The worst part is a stupid line at the end for one of the characters that left me flabbergasted at what they were going for.

Spider-Man Homecoming is pleasant to watch. That is more than enough to buoy the viewer while watching it.  Upon reflection it is a jumble of ideas that don’t coalesce into a real story and the spectacle is never really that spectacular, though that last part might be the fault of the too dark theater I saw it in.  I liked the movie. It is easily the better than the two Amazing Spider-Man movies.  Unfortunately for Homecoming, this year has been a very good year for superhero movies and with Logan and Wonder Woman in recent memory, it is hard to get excited for a film that is merely okay.

One thought on “Spider-Man Homecoming”