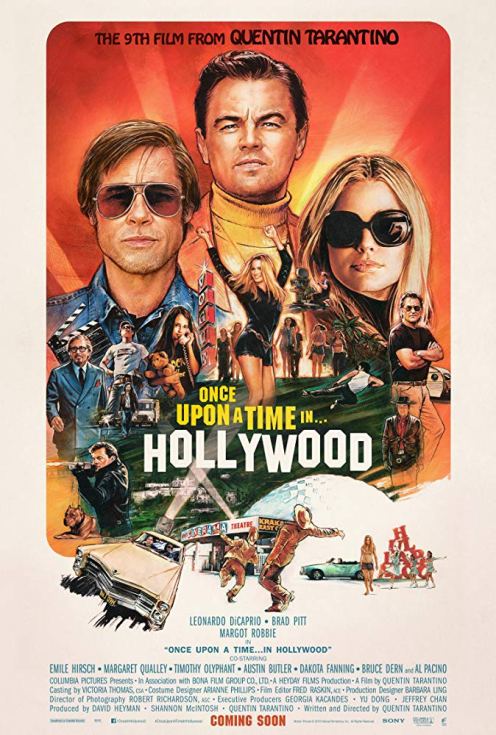 Every new Quentin Tarantino movie is an event. His reputation has taken something of a hit over the last year or two, but none of that has anything to do with the quality of his films. Once Upon a Time…In Hollywood is simultaneously something of a culmination of all of his previous movies and a departure from them. For the bulk of its nearly three hour run-time, it eschews the violence that tends to permeate Tarantino’s work, as well as his distinctive dialogue rhythms. It still feels very much like a Tarantino movie. (By the way, I am going to end I am going to include a ranking because everyone loves rankings.) Once Upon a Time…In Hollywood is somewhat difficult movie to explain, but it is certainly a movie worth watching.

This movie is a pure hangout movie; a movie you just want to put on to hang out in the world and with the characters. Many Tarantino movies are hangout movies to some extent, but none are so thoroughly as Once Upon a Time…In Hollywood. It seems almost plotless, though that isn’t really accurate the movie does feature a lot of its stars just going about their business. Leonardo DiCaprio’s Rick Dalton takes a meeting with an oily producer, played by Al Pacino, then works a day on the set of a western TV show. Brad Pitt’s Cliff Booth drives Rick around and fixes his antenna. He also picks up a hitchhiker who leads him on an adventure to Spahn Ranch, where he comes face to face with the Manson Family. Then there is a thread of Sharon Tate, played by Margot Robbie, who goes about her business, doing a little shopping and, in one of the standout sequences of the movie, sitting anonymous in a theater taking in the audience reactions to recent movie she was in.

It is also a movie about Hollywood mythmaking. Aside from the real actors portrayed in the film, there are its two leads: former TV cowboy Rick Dalton whose transition from TV to movies failed and he is scared he is on his way out of the industry, as well as his stunt double and gopher Cliff Booth. Most of the action is handled by Booth, while Dalton is something of a mess. Dalton’s primary concern seems to be his personal myth. He is concerned about what playing the villain of the week on various TV shows will do to his leading man credibility and the public’s perception of him and his most famous character Jake Cahill. He knows losing fake fights makes him seem like less of a tough guy. It is all about managing how he is perceived. Cliff, for all that he is the doer of the pair, has his own concerns with perception. While Rick’s star might be fading, Cliff is basically unemployable because of his reputation. There are rumors that he killed his wife, and the movie deliberately leaves the truth of those rumors ambiguous. He also remembers getting fired off of the set of The Green Hornet after fighting with Bruce Lee. While the event occurred, the truth of Booth’s recollection is suspect. Then there are the movie’s run ins with actual historical figures. Sharon Tate gets the bulk of the screen time, but others appear as well. Other than the ending, the scene that most plays into the overt mythmaking nature of the film is when Robbie as Tate is in the theater watching actual Sharon Tate on screen in The Wrecking Crew. It puts the artificiality of it all in the viewers face. This, however, is a movie that revels in that artificiality. What is important isn’t what actually happened, but having fun imagining your version. Leonardo DiCaprio as Rick Dalton didn’t appear in The Great Escape, Steve McQueen did. And not Damian Lewis as Steve McQueen, actual Steve McQueen. Hollywood is a place where you can make whatever story you want happen, so why shouldn’t a movie do that. It feels like what Tarantino has been playing with in his last four or so movies, at least.

Saying more feels like it would spoiling the events of the movie. This isn’t really a movie that depends on being unspoiled, but I am tempted to run down a list of my favorite scenes rather than reviewing it. I guess I’ll finish by saying the movie has a very good dog and Pitt and DiCaprio are charming.

3. Once Upon a Time…In Hollywood